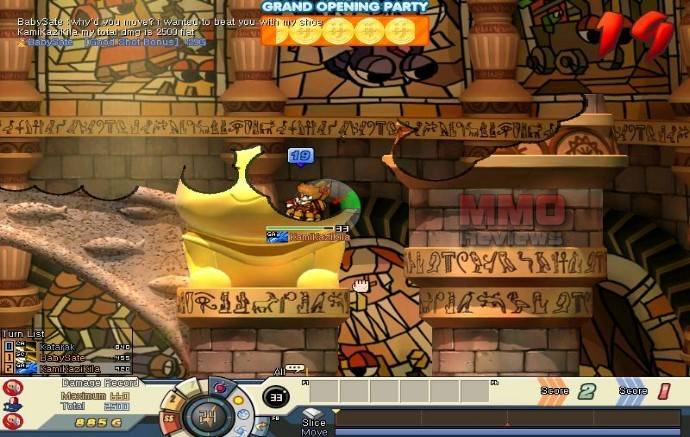 Developed by Softnyx for Windows.

Gunbound is a 2D turn based tactical shooter MMO that plays a lot like the classic game ‘worms’. The game’s objective is to try to hit your opponents from across the map by calculating the correct angle and power of your shot. Gunbound is a casual MMO that anyone can play without a large time commitment. Typical matches last no more than 5-7 minutes without lag.

GunBound has a turn-based artillery gameplay, bearing properties of two-dimensional games and ballistics-simulation games. In GunBound, players are assigned to two opposing teams which take turns firing at each other with vehicles called "Mobiles" in GunBound parlance. Each "Mobile" has three unique weapons, labeled "1", "2", and "SS" (Special Shot).

Factors like terrain condition, wind currents and elemental phenomena force players to continuously change their aim and trajectory power setting while rethinking their strategy at the same time. GunBound also implements a 'delay' turn system which is influenced by the Mobile, the weapon and/or item a player uses - using items or taking time with actions results in a longer wait before the player's next turn.

The game has twenty Mobiles in total. Every Mobile falls under one of three different defense categories: Mechanical, Shielded, and Bionic, and one of four different attack categories: Laser, Explosion, Impact, and Electrical.

Different mobiles have different defenses, attack and health levels, delay, angle ranges, bunge (land damage) ability, and moving ability. The 21 Mobiles are Armor, Mage, Nak, Lightning, JD, A.Sate, J.Frog, Kalsiddon, Trico, Bigfoot, Boomer, Ice, Turtle, Grub, Raon Launcher, Aduka, Maya, Wolf, Phoenix, Dragon, and Knight. Choosing Random (which randomly picks a bot) is the only way to obtain the Dragon or Knight or Phoenix (if you aren't a Power User, Cash is used to pay for this EX Item) mobiles; the other bots can be chosen at any time prior to a battle. In the Gunbound Revolution version, Maya is bought in the Cash store.

- Solo mode; each player has only one life during game play. Once dead, the deceased players access a three-in-a-row, rolling slots game in which they can gain gold, alter wind conditions (affecting the shots of still-living players), or drop randomly-chosen items or bombs from the sky.

- In Tag mode is similar to Solo mode with only one difference: Players are allowed two Mobiles at the beginning of a match. In this mode, each player is permitted to switch once per turn between his or her chosen primary and secondary Mobiles, each with its own health value (Initially, secondary Mobiles only have half of its total health. This, however, can be mended using Healing items). Players cannot switch Mobiles once dead.

- In Score mode, the objective is to kill or bunge opponents until the enemy life counter reaches zero. Bunging is when you can destroy the land around the opponent's area and cause him/her to fall. The lives allotted in Score mode relies on the amount of team players participating in a match. For a team composed of n players, there are (n + 1) lives. Lives are pooled between players in a team. A team wins if the opposition's life counter reaches zero, or if there are no more opponents left on the field. Dead players, upon dying, have a choice of their drop location and drop at that point in the field in a set amount of 4 turns after the point is chosen. Should a player not hit land, he or she will continue to fall and the team life counter will not go down, but instead cause the player to reselect the drop location and wait another 4 turns. The player's drop location is slightly affected by wind conditions.

- Jewel; participants are required to eliminate targets called Jewel (seen in the form of Raons). Each Jewel is assigned a point value for being destroyed. Point values include -5, 5, 10 and 25. Shots fired at the enemy will not cause damage, but can destroy land. Teams win the game by rounding up at least 100 points, or bunging (hitting the land underneath them until they drop down) their opponents until none are left.

- Powerball; same as Score mode, except that only the 'teleport' item is available. Instead, Powerballs representing the various items drop from the sky. Collecting the Powerball grants the corresponding item's ability. Different effects can be stacked. There are five Powerballs: Thunder Ball, Dual Ball, Gold Ball, Force Ball and Bomb Ball.