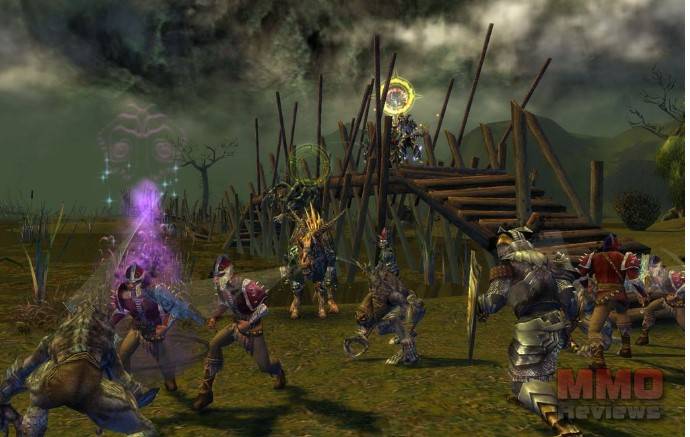 Guild Wars is a global online roleplaying game. Players can engage in cooperative group combat, in single player adventures, or in large head-to-head guild battles. Guild Wars is a mission-based game set in a stunning 3D fantasy world that offers excellent support for guilds. Guild Wars differs from other MMORPGs in its lack of subscription fees (purchasing an episode allows a user to play it online without limit, though he or she may encounter some areas or items which cannot be obtained without purchasing other episodes) and relatively low level caps. After reaching the level cap, players differentiate their characters by which skills they equip to bring into battle; new skills can be learned by exploring and completing quests, but only eight of a player's learned skills can be equipped at any one time.

Warrior, Elementalist, Monk, Dervish, Ranger, Mesmer, Necromancer, Paragon, Ritualist, or Assassin. Every profession has its own strengths and characteristics, a weapon or magic specialty, and a unique set of skills with which to deal damage, manipulate the enemy or environment, or protect and heal allies. Each profession provides a set of attributes which determines the effectiveness of weapons and skills in battle.

- Primary Profession Your primary profession determines your hero's basic appearance, including the type of armor the hero wears. It also provides several attributes that improve skills over time including a primary attribute that is not available when the profession is chosen as a secondary.

Apart from fighting with a sword, skills make up the majority of combat interaction. Each skill has a different effect when used, and fall under many different categories. They can range from offensive skills such as setting foes on fire and defensive skills which include resurrection and healing allies. Enchantments which include giving players extra health points as well as Hexes that drain the enemy's life unto your own also make up part of the skill selection in Guild Wars. Feats, also known as attack skills, are used in conjunction with weapons to augment the damage that they can deal added damage and cause different effects, such as knocking people to the ground with a hammer.

Player versus Player (PvP) combat in Guild Wars is consensual and team-based. Such combat is restricted to special PvP areas, the majority of which are located on the core area known as The Battle Isles. Individual campaigns also have certain campaign-specific PvP arenas. Players may participate in PvP combat with either their role-playing characters or with characters created specifically for PvP. Characters are rewarded with experience points for victories in competitive battle and the player account also acquires faction points redeemable for in-game rewards.[16] In addition to this victory may also award points which contribute towards completion of character or account based titles. The following are the competitive modes in Guild Wars:

- Random Arena; Four-on-four matches with teams randomly composed from those waiting to enter combat. There are many different arenas with different victory conditions: deathmatch and kill-count.

- Codex Arena; Four-on-four matches with player-managed teams. These matches are played in the same areas as the Random Arena with a few exceptions. Each class has a pool of limited amounts of skills to choose from and this pool changes daily.

- Heroes' Ascent; A continuous tournament where players form teams of eight to battle in a sequence of arenas, culminating in the Hall of Heroes whose results are broadcast to all online players in addition to rewarding the victors with high-end loot. Arenas in the Heroes' Ascent tournament include deathmatch, altar-control, and capture-the-relic victory conditions. Victories in the Heroes' Ascent award players with fame points that can be used to determine the rank of the player.

- Guild Battles; Two guilds meet in guild halls and stage a tactical battle with the aim of killing the opposing Guild Lord, a well-protected NPC. Victory in guild battles affects the rank of the guild in the global Guild versus Guild (GvG) ladder. GvG is considered the most supported of competitive formats in Guild Wars. In 2005, ArenaNet hosted a Guild Wars World Championship, and in 2006, the Guild Wars Factions Championship was hosted as well. Since then, the Automated Tournament system has become the norm, but smaller 3rd-party tournaments have been hosted, including the Rawr Cup and the Guild Wars Guru cup. The GWWC, GWFC, RawrCup, and GWG Tournament all had real life prizes; the former tournaments had cash prizes, the RawrCup and Guru Tournament had laptops and MP3 players to give away.

- Alliance Battles; Guild Wars Factions introduced an arena where twelve players aligned with one of the opposing Kurzick and Luxon factions team up to fight an opposing team to gain new territory for their faction. The twelve player team is composed of three teams with four human players each. The three teams are selected randomly from the teams waiting on each side when the match begins. Alliance Battles grant alliance faction and affect the border between the two factions in the Factions-specific continent of Cantha. The location of the border affects the map in which the battles take place by adding a bias to favor the faction losing the war. With the "alliance faction" players can then progess in spending their faction in many ways. 1. Buying PvE Skills. 2. Increasing your Guilds faction reputation. 3. Buying Materials for Luxon and Kurzick Armor. etc.

- Competitive Missions; Factions also introduced a pair of competitive arenas, named Fort Aspenwood and The Jade Quarry, where randomly assembled teams of players from the opposing nations enact particular events in the Kurzick/Luxon war. Victories in these missions have no global effect, but do grant the players with alliance faction.

- Team Arenas; The Team Arenas were PvP arenas where two groups of four organized players battle each other. Groups were formed in the eponymous outpost and Random Arenas teams with 10 consecutive wins automatically enter the Team Arenas. Both Balthazar's Faction and Gladiator points could be obtained from Team Arenas. In Team Arenas, there were two victory conditions: Deathmatch and Kill count.This type of PvP was removed in the October 22nd, 2009 update.

- Hero Battles; Hero Battles was the name given to the mode of PvP known as Hero versus Hero (HvH). In this contest, players would enter the battle with 3 Heroes, and fight another player and his/her team of 3 heroes. A player must have had a named account to participate in Hero Battles. This type of PvP was removed in the October 22nd, 2009 update.

The co-operative parts of Guild Wars use several standard tropes of the MMORPG genre. Players explore the game-world, kill monsters, perform quests, and complete missions to earn rewards and advance the story. Rewards include experience points, skill points, skills, gold, faction, and items for the player character. Some of these rewards advance not only the particular character but also unlock features of the game account-wide. In each campaign the player is involved in a linear story with which they interact by performing a series of primary quests and missions

Full games in the original Guild Wars sequence were released in episodes known as campaigns. Players must purchase an individual campaign in order to access the game elements specific to that campaign; however, all campaigns are linked in one game world. Each campaign is independent of the others, with its own co-operative storyline, campaign-specific skills, and competitive arenas. Players owning different campaigns may still interact in shared areas, including trading for items specific to the campaigns they have not purchased. Players who own two or more campaigns may transport their characters freely from one campaign to the other.

The first campaign, Guild Wars is Prophecies. The Prophecies storyline is situated on the continent of Tyria and revolves around the Flameseeker Prophecy, a prophecy made by an ancient dragon named Glint. Prophecies was followed by Guild Wars Factions, released exactly a year after Prophecies. Factions is situated on the small southern continent of Cantha that is separated from Tyria by a vast ocean. The events of the Factions campaign concern the return from death of a corrupted bodyguard named Shiro Tagachi. Factions features a global persistent war between the rival vassal nations of Cantha; the Luxons and the Kurzicks, and the notion of guild alliances. The third campaign is Guild Wars Nightfall. Nightfall features the arid continent of Elona, joined to southern Tyria across a vast desert. Nightfall introduced heroes, advanced computer-controlled units that can be micro-managed by players, including the ability to customize their skill layout and equipment.

Scrapping their initial plans for a fourth campaign, ArenaNet has released an expansion pack, Guild Wars: Eye of the North, to the previous three campaigns. Not being a full campaign, this expansion requires one of the other released campaigns, and is only accessible by player characters at level 10 and above.