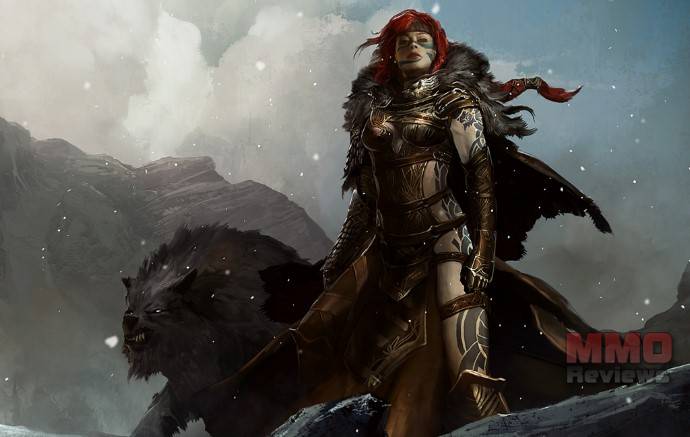 Currently in development and no release dates have been announced.

Guild Wars 2 is the sequel to the Guild Wars series which is currently in development by ArenaNet. The game will feature a new game engine as well as changes to character development and the PvP system.

• A dynamic, interactive gaming experience. Your choices and actions have a real effect on the world around you. Will the besieged villagers fight off the rampaging centaur horde or succumb to the attack? You decide!
• Personalized storylines. Guild Wars 2 is YOUR story. Follow your own customized storyline as it evolves from choices you made at the beginning of the game.
• New depths of character customization. You choose from eight powerful professions and from five races— the defiant humans, the feline charr, the mystical sylvari, the mighty norn, or the ingenious asura.
• Innovative combat. Featuring amazing skills, combos, improvisational tactics, and environmental weapons, the Guild Wars 2 combat system puts the fun back in MMO battles.
• Fierce player vs. player action. Take up arms in epic world vs. world warfare or test your skills against other players in player vs. player (PvP) arenas.
• A rich, fully realized fantasy world. Developed by one of the most talented and widely respected teams in the industry, the vast world of Tyria has been brought to life with incredible attention to detail.

Guild Wars 2 is a whole new game with different professions and races, new technology, and expanded gameplay. It is not possible to directly use an original Guild Wars character.

The control & movement system is going to be significantly changed. In particular, mouse movement in the form "click to move" will be removed from the game; however, target locking will still function. Guild Wars 2 will be a true 3D environment which will allow characters to jump over obstacles as well as swim and dive underwater. Flight will not be a featured character capability in Guild Wars 2.

The original Guild Wars game engine has been improved upon with support for more detailed environments and models, better lighting and shadows, new animation and effects systems, plus new audio and cinematics engines and a more flexible combat and skill-casting system.

- Sylvari; Long ago, a weary soldier planted a strange seed in the depths of the Maguuma Jungle. For centuries, the Pale Tree grew, branches arching over the forest, until at last--twenty five years ago--it bloomed, and the Firstborn stepped into the world. They were followed by their brethren, season after season of sylvari, wide-eyed with wonder and searching for purpose in this strange land. Shaped first by the Dream that nurtured them before they awakened, the sylvari now travel Tyria seeking adventure and their place in the world...

- Norn; They hail from the frozen north--the norn, a race of heroes. These massive, shape-shifting warriors prize individual valor and victory above all. They trust only the power of steel. The norn do not beg or grovel for the favor of the Gods, no. Instead, they revere the spirits of animals and draw strength from them. The norn can assume the form of their sacred totem beasts--bear, snow leopard, raven, and wolf--and call upon their power whenever they do battle, which is often.

- Charr; The thundering sound of their advancing war machines makes the lesser races tremble with fear. They are the charr, and conquest is their birthright. The charr race was forged in the merciless crucible of war. It is all they know; war defines them and their quest for dominion drives them onwards, always onwards. The weakling and the fool find no place among the charr...

- Asura; They may be short in stature, but this subterranean race of magical inventors are intellectual giants. These incredibly intelligent beings use their knowledge and skill with magic and crafting to assert their natural dominance. In the world of the asura, it is not the strong who survive, but the clever. Other races believe they should rule by virtue of their power and strength, but they delude themselves. All will serve the asura - in due time...

- Human; The resiliency of the noble human race has been tested many times. They have paid a dear cost for their security and liberty, yet their spirit remains unshaken. From the invasion of Ascalon by the savage charr, to the cataclysmic rise of the lost kingdom of Orr from the depths of the sea, mankind has been battered and overwhelmed. They have lost homelands; their prayers go to silent skies. Now, the remaining sons and daughters of man have one last homeland--the nation of Kryta, ruled by Queen Jennah...

Guild Wars 2 will utilize a very different system for quests than Guild Wars 1. Instead of the standard green exclamation point above an NPC's head to mark a possible quest, Guild Wars 2 will use a new Event system. In this system, events will happen with or without the presence of the player, and if a player happens to be present at the time of the event, then the player can complete the quest by participating in the event, and the outcome of the event may affect if, or what kind, of event may happen soon thereafter. Three examples were provided to illustrate how this system may work.