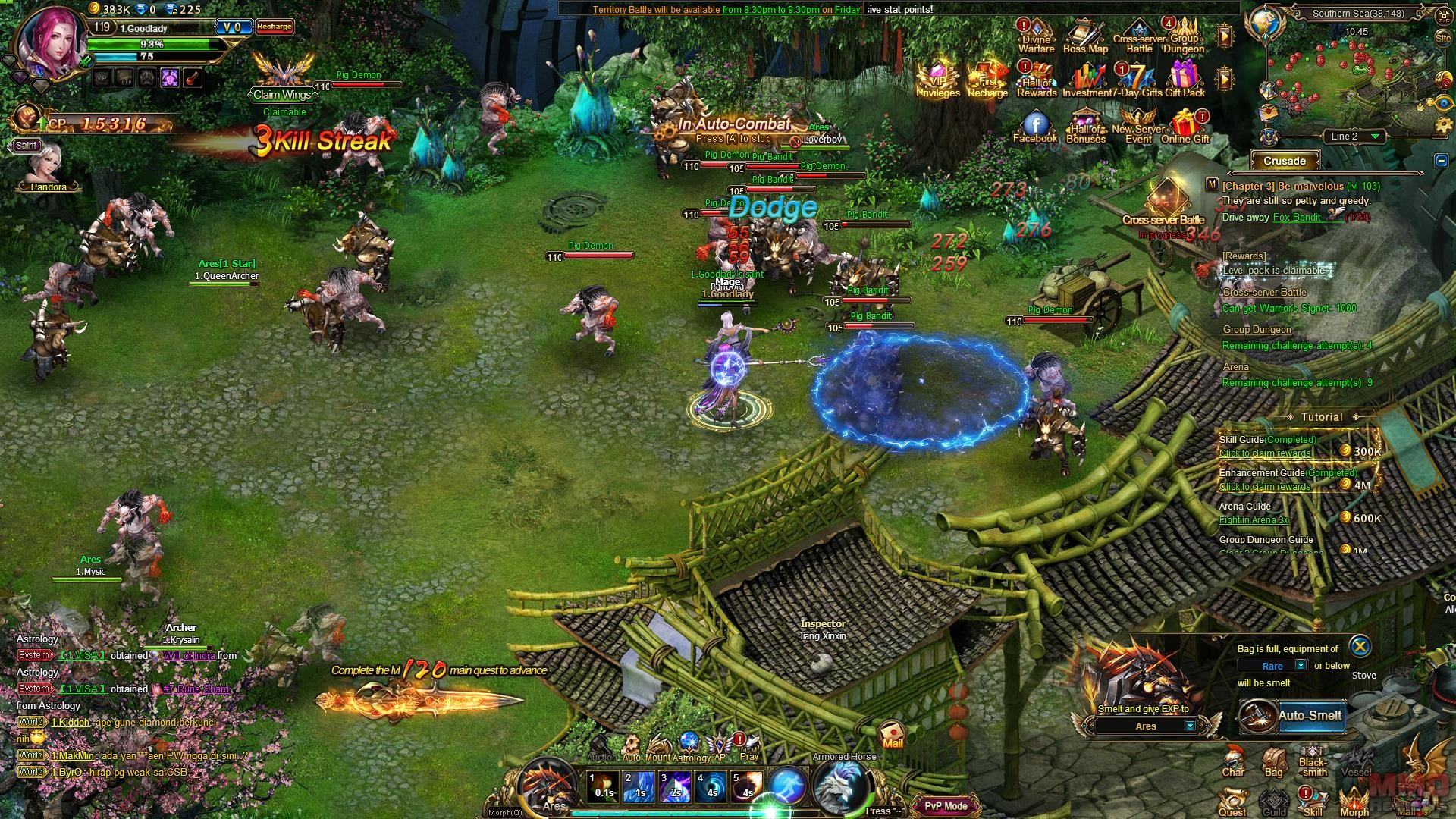 Guardians of Divinity is a browser based free to play RPG developed in Asia and now released for the European/American market, we see a number of traditional concepts, features and mechanics for this genre including completing quests, gathering and enhancing gear, unlocking new content and exploring a rich and beautifully designed world filled with interesting creatures, locations and NPCs.

Guardians of Divinity is primarily a story driven game focusing on quests for the initial levelling process, unlocking features along the way, the core philosophy is levelling up gear and trying to constantly improve your CP rating by acquiring new gear, enhancing it, unlocking new Gods and mounts and improving them as well. The push to end level is rewarded with higher level content that is more challenging and competitive play with and against other high level players.

Players can choose from three different classes in the game, each of which are gender locked to a specific character; a female Mage, a female Archer and a male Warrior, though each are described as being ranged, high attack characters the Mage has extra high AOE damage, the Archer has high overall damage, and the Warrior can absorb higher levels of damage. A players class primarily determines what their primary stats and skills are as well as the role they play when in a group.

C.P. is the overall character power of a player, a number made up from the players character levels, companion levels, skill upgrades, gear tier, equipped wings, mounts, titles and more. This value gives players an overall idea of how powerful a player is when in combat. Most features in the game help improve C.P.in one way or another, the Blacksmith feature allows players to Enhance gear by spending cash to improve its level up to the same level as the character.

The story revolves around evil fallen Gods opening Pandora’s Box and releasing Hades among others to sew chaos in the world, your character has been tasked by Odin to neutralize these threats which consists of gaining the help of other gods, goddesses and characters of myth from various real world pantheons (Odin, Osiris, Prometheus, etc.) and then go up against other creatures and gods including Anubis, the Minotaur and more. Completing quests and pushing the storyline through different chapters will give players access to the Gods as companions, but also the ability to Morph into them and take on their powers for a time.

The game is designed to allow near fully automated play where the character will run around auto-pathing between quests to pick up, hand in and complete quests including traveling to the needed areas. Once there automated combat ensues and the character will attack all the needed enemies for that particular quest; players can assign certain AFK actions such as using mount abilities, using heal potions, buying potions from the shop and even resurrecting your character if they die.

The game can 90% play itself, but players will need to claim their rewards when a quest is completed, making is just fall short of a fully automated game unlike some other games in the genre.

Leveling up progressively unlocks new features at certain level milestones, ranging from PVP and PVE players can compete and participate to earn ranks and rewards. PVE content consists of fighting world bosses and Group Dungeons where you can make a room to play through challenging instances with random players. The Divine Warfare allows players to challenge each other in PVP, players will fight an AI controlled copy of the player they have challenged and if they win they assume a new rank and gain extra currency and rewards from their victory.