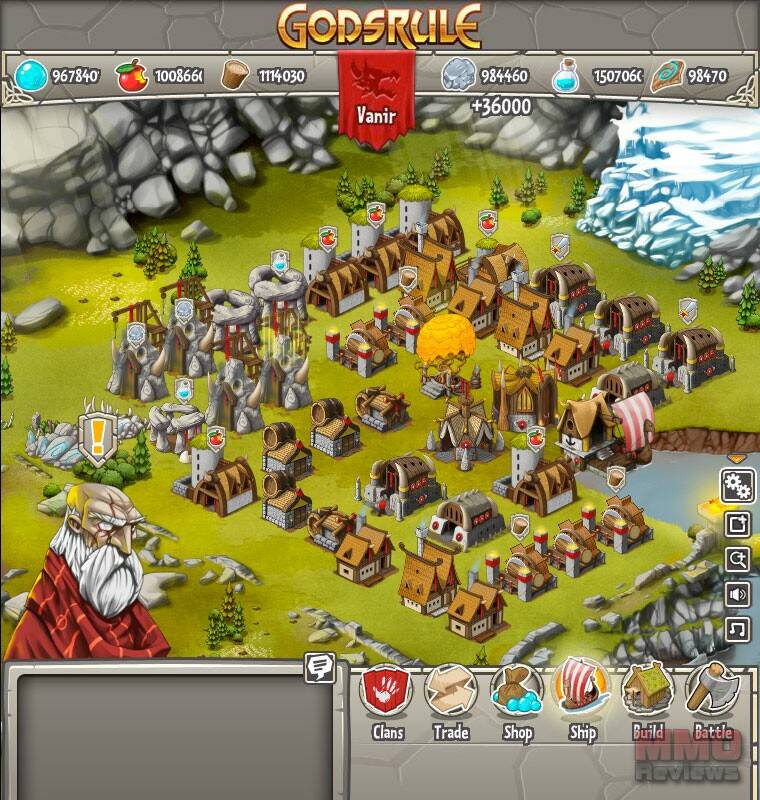 Godrule: War of Mortals is an upcoming free-to-play MMORTS that is set in a lush fantasy world and mixes social gameplay with established RTS elements to create a unique cross-platform experience. The game allows players to experience the same persistent world via browser and the iPad, enabling them to team up with their friends in battle, train units and manage their empire from anywhere at any time.

Players will lead their fierce armies into battle and manage their empire at the same time. To prevail over competitors, they will have to dominate contested territories, collect scarce resources, expand their land, and slay their enemies with powerful units and magnificent spells.

Since the dawn of time, mortals have worshipped the old gods as their supreme leaders. With the rise of the new gods, the old gods’ grasp on mortals was weakened. Unwilling to cede their power, the old gods struck which is the beginning of an epic war between old and new gods.

The World Tree, which held the universe together, shattered under the weight of this gruesome war and its splinters rained down on the mortal world where their powers were soon discovered. In exchange for a seat alongside their gods, mortal leaders offered them their service by gathering their splinters and fighting their enemies.

While the human race has joined the old gods, elves, demons, and giants have taken the new gods’ side. These two factions are now clashing in the ultimate war between the Keepers of the Ancient and the Souls of Ascension.

The vast game world consists in eight different territories that can only be reached on ship as they’re divided by an ocean. At the beginning, only one territory will be available. Players will have to upgrade their harbour in order to unlock the other territories one by one.

War’s raging on all territories. When entering a territory, you will see how much time is left of that territory’s round. The winning faction of each round gets a territory reward that can be picked up on the battle map whenever your faction has earned them, but only for those territories you’ve unlocked.

By participating in battles, killing enemies, capturing the relic on battlefields, etc. you will gain XP which allows earning new battle ranks, unlocking titles and becoming a more respectful fighter.

Combat rewards are received at the end of each battle. The more havoc you cause on the battlefield, the more rewards you will earn.

Godsrule features two varieties of combat: PvP and creature battles against computer controlled AI. In order to dominate the battle, tactical skills as well as an efficient team communication is essential.

Regarding PvP, players will first have to choose one of the eight territories they want to fight in and create a new battle. Then, units can be summoned onto the battlefield in order to attack the enemy, collect crates that contain bonuses, and capture the relic. The first one to capture it will win the battle.

Creatures battle work the same way but in contrast to PvP, there will be more relics that have to be captured in order to claim the land. Creature combat also functions as training for your units.

One of the game’s social features is the possibility to form clans which allows for clan battles, trading, erecting a clan hall, etc. When being among the faction’s best three clans, you will receive an even bigger reward for winning a round on a contested territory.