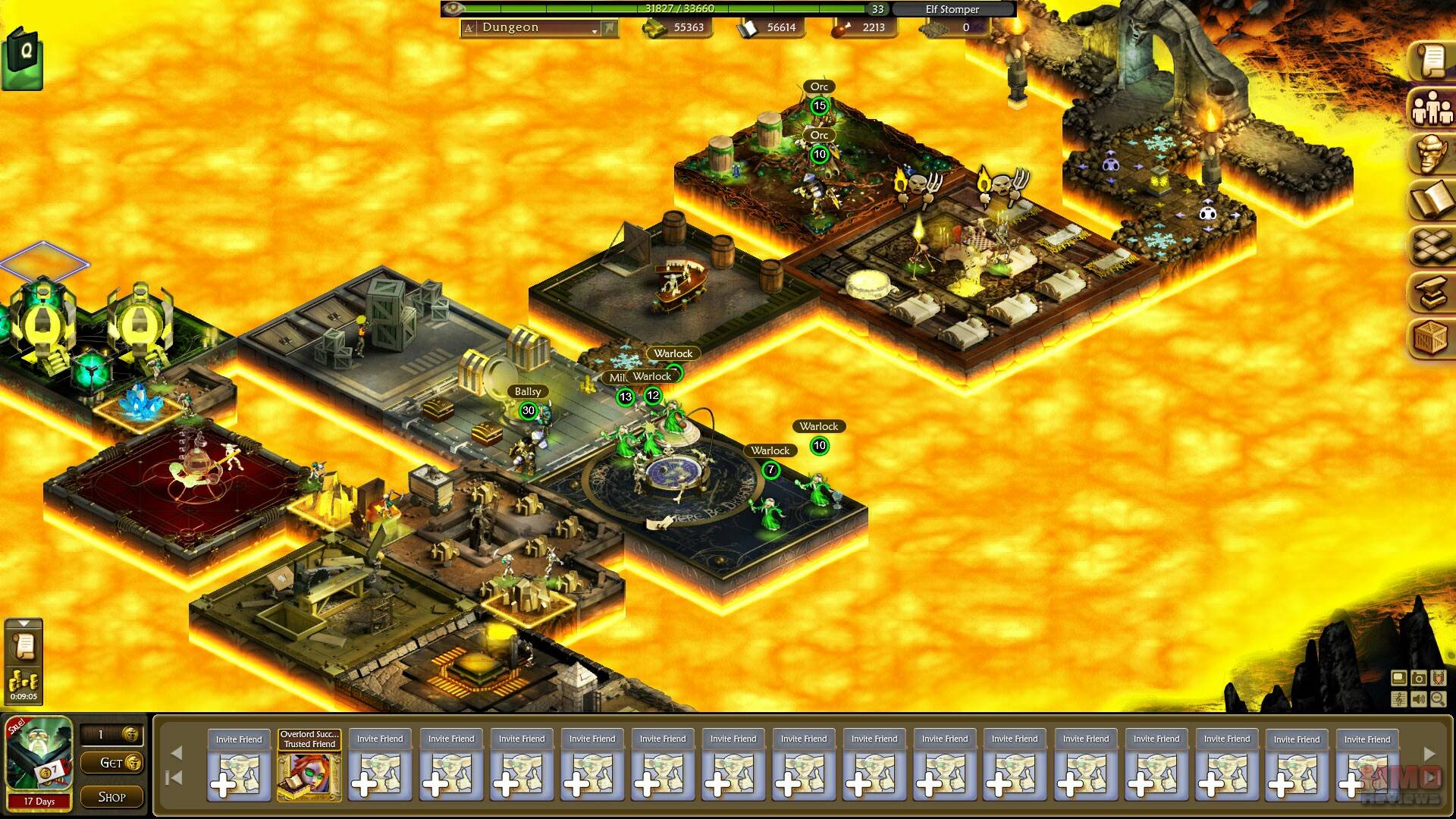 Originally launched as Dungeon Overlord for Facebook, Goblin Keeper is a free-to-play browser-based strategy MMO bursting with competitive rivalry. Players are put into the role of a bad tempered overlord striving for nothing less than world domination. To achieve this, an entire army of goblins, orcs, ogres and other unsavoury creatures must be commanded in order to develop a small kingdom into a powerful empire.

- Build your dungeons according to your imagination, deciding the size and position of your rooms and setting traps.
- PvE: Destroy and loot the homes of the elves on your raids on the surface and capture them in your dungeon's traps.
- PvP: Face other players in battle, loot their dungeons, and eliminate their creatures.
- Crafting: Improve your rooms with equipment, furniture and dozens of varying items.
- Tactics: Develop various tactics to defend your dungeon and to fight back raids.
- Heart: Make the heart of the mountain yours to own! Raise taxes and fortify your mountain with special enlargements.
- Get your subordinates working.
- Enslave your friends in your mines in order to get more resources.

Experience & quests - Players will complete quests in order to obtain resources, gain XP and to level up. Higher levels enable them to occupy more dungeons. The huge amount of available quests is divided into 3 types: tutorial, vengeance and other quests.

Happiness & efficiency - 2 of the subtler strategic aspects of Creature control. Happiness is determined by the overlord’s supply with resources on pay day and his way of treating his subordinates. Efficiency can be enhanced by shocking your creatures but results in a decline of happiness.

Hate - When raiding settlements, hate is generated which even grows the more often a raid takes place in this particular settlement. Hate is a value reflecting the likeliness of retaliation.

Regional market - A non-server-wide place where players can buy and sell resources and crafted items like furniture or traps.

In Goblin Keeper, there’s a huge variety of resources available. They are grouped together as raw/ basic resources like gold, crystal, food, iron, etc. and crafted resources such as frosted quartz, reinforced leather any many more that are produced using certain technologies.

Crafting is a vital element of the game. Players can produce resources, furniture, recipes and traps either for proper use or in order to sell those items on the market.

Players can use the creatures inhabiting their dungeons in order to carry out tasks. Most creatures work autonomously but some require direct orders. They can be trained and upgraded. All creatures are characterized by a class, different combat stats and special requirements. They must be fed, paid with gold and other resources.

The game world’s creatures are divided into several classes:

Demon - Demons can either be Arch Fiends, Balrogs, Imps or Succubi.

Elv - Elven creatures are the natural enemy of every overlord. They occur as Elf Cleric, Elf Wizard, Footman, Paladin, Ranger, and Rogue.

Combat in Goblin Keeper is asynchronous and turn-based. This means that you only have to launch an attack and the fight will resolve on its own. There’s no need to wait for your creatures travelling to the target and back, you can log out and log in again later to see the results.

There are several combat types in Goblin Keeper:

Raid - Raiding rival dungeons and settlements on the world’s surface can be done in order to obtain resources. Raiding elven settlements generates Hate.

Pillage - Pillaging will allow your forces to destroy furniture and tiles in an enemy dungeon.

Conquest - Conquering is one of the hardest, but most rewarding things to do in the game, meaning to take over another player’s dungeon completely.