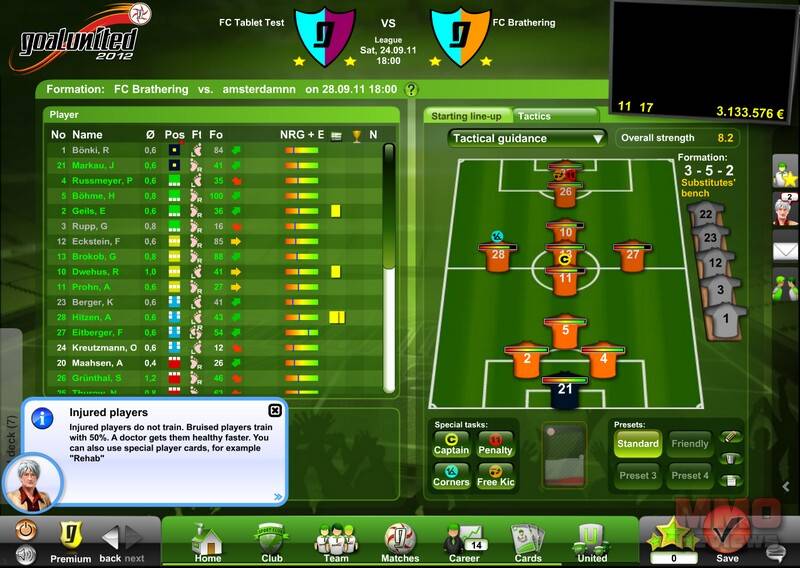 GoalUnited is a browser game in which the player is tasked to manage an entire football team. The player needs to manage all the aspects of the team such as football players, buy and sell the players, build and manage the new stadium and so on.

Leagues
Every league consists of 10 teams. In the league layers 1-6 the 2 best teams of each league will participate in play-offs with their neighboring league to get promoted to the next league. In the lower league layers 7-20 the 3 best teams of a given league get promoted without playing a playoff. The teams below the red line will be relegated to a lower league after the season concludes.

Players
First, have a look at your players, who will hopefully bring success to your club. Your squad is composed by 19 players. Every player has different skill values and abilities.

Training
Training has a big influence on the long-term-development of your players and your team. Therefore, you should put some thought in your training settings. You can choose which abilities of your players you want to train, and also with how much intensity.

Formation
You can spend a good amount of time here to find the best formation for your squad. You'll find yourself testing several variants of formations against a given opponent and his tactic, until you find one that's promising. Generally, you are able to define an individual formation and tactic for any given match, or just fall back on your standard setup, which is automatically chosen any time you do not set up an individual formation

Sponsoring
Your players, stadium and staff have to be funded, and need to be paid every week. To avoid getting in debt, you should check your income sources regularly. A major income source are sponsors, which give you money every week as a base payment and additionally for winning a league match.

Stadium
Apart from your sponsors, the ticket sales at home matches are another important income. Depending on the stadium type, the “Comfort” of the stadium, the “Condition” of the stadium and the charged “Ticket prices” many or few visitors come to your matches. To improve your income, you have to keep your stadium in good condition, raise comfort or build additional seats to accomodate for the needs of your fans.

Transfer market
Step by step you've now established a solid foundation - but sooner or later you will decide to add to your strength by aquiring new players. Since your squad maximum is 25 players and you start with 19 players, you still have some room to add to your team via the transfer market.