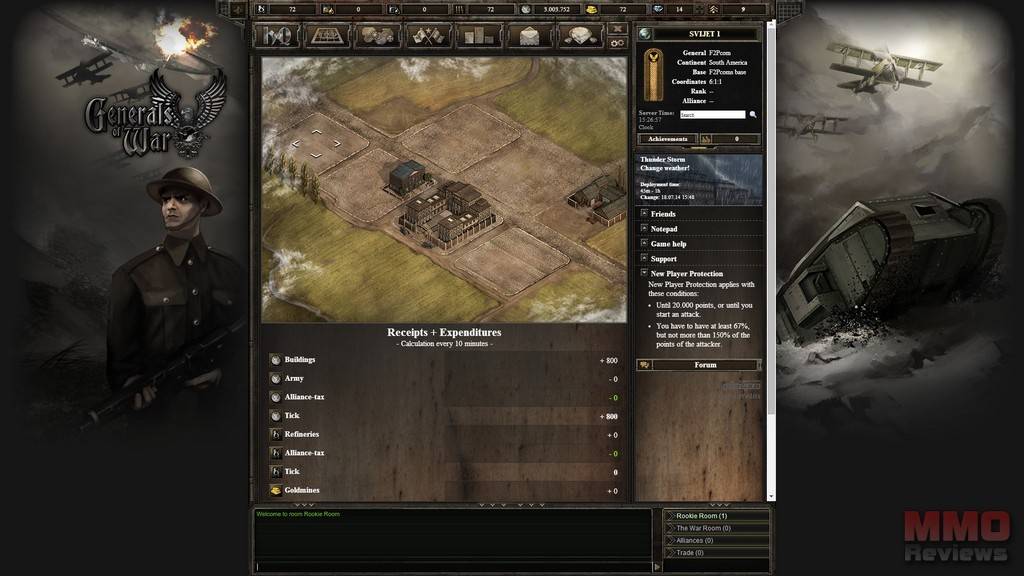 Generals of War is an exciting strategy focused free-to-play MMO that can be accessed through a player's web browser where they take charge of their own WW1 headquarters and must raise an army to fight against their enemies.

Players are responsible for managing their own base of operations, handling the acquisition and spending of their resources as they improve their headquarters, train up a large military force and actively engage in PVP against other players for glory and the extra resources and rewards it brings. The game itself is completely free to play; however, it does have a premium currency option with the introduction of Diamonds that players can purchase with real money get access to helpful features and options such as buying raw materials, upgrading their units or even purchasing the 30 day General Status that gives them extra off-line features to help run their base

Resources come in many forms, from the classic six raw materials (Oil, Gasoline, Diesel, Gold, Ammunition and Money) needed to build, research, trained and maintain a functioning headquarters and organisation. These resources can be gained through constructing specific buildings, trading with other players, using diplomacy to seek help or even threaten your neighbours or ultimate players declare all-out war on them to take their resources for yourself.

There is a wide variety of buildings that can be created and constructed within a player's base. They typically fall into two main categories: resource production (Bank, Ordnance Factory, Oil Derrick, and Goldmine) or unit construction (Arms Factory, Barracks). Many buildings have a prerequisite building that must be constructed before the more advanced building can be created. Additionally, some buildings can be upgraded multiple times or have multiple versions of the same building created. Some buildings give access to new features, e.g. the University allows players to research new units and the Defense Center allows them to begin using espionage and spying on their rivals.

Research primarily gives players access to new units and defences, which can only be undertaken once the player has built a University in their base. Exploring new research possibilities costs money and time depending on the type of unit/defence a player is trying to gain access to. Unit wise a General can learn how to train up a variety of Infantry, Aviation, Tank, Marine, Defence, Chain Drive, Machine Gun, Anti-Aircraft Gun, Artillery, Mortar, Plating, Grenades, Flamethrower, Zeppelin, Monoplane and more. Alternatively players can focus on gaining access to new defensive buildings such as a Bunker, Trench, land mines and more that have a fixed defence within the base.

Generals are able to train up a wide variety of different military units once they have explored the appropriate research path. These units have both an attack value and a defence value representing how well they will perform as an offensive or defensive unit. The combination of units in a players army will give an overall score when making an attack determined by their collective attack value. Similarly when a player is defending their territory, their collective defensive value will determine how well they will perform in battle. It can take seconds, minutes or hours to train up an individual unit and each unit has a cost associated to it to not only initially train the unit but also maintain it with an ongoing cost.

Savvy players often band together to form player alliances, organised groups that are able to coordinate their attacks with each other against chosen targets, typically other alliances that they are at war with. For this agreed declaration of raising arms against a common enemy, allied players will find themselves with extra help and resources to build up their own headquarters and military force.