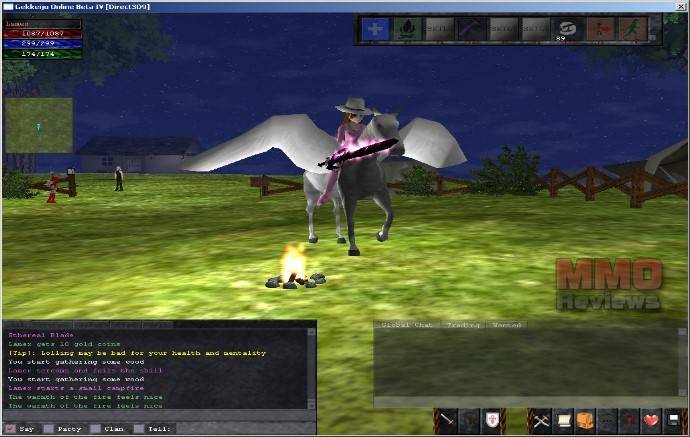 Developed by Coolhouse for Windows.

It is a Free-to-play Fantasy based 3d Multi-User Dungeon that has been running since 2003. The game is full of totally unique features never seen in any Graphical Online Role-Playing Game before.

It incorporates anime-style characters into a medieval fantasy world.

There are two chat boxes, both permanently displayed.

One is for global chat. Text written there is viewed by all players in any part of the game. By custom, conversation in global chat tends to be of a frivolous nature, generally banter and humour.

This facility has allowed on-line friendships to develop between players. Exchanging information and views from locations in many countries.

The basic mode of play is to kill underworld monsters which have invaded the Land of Xalenia. To do this players must select for their character, armour and weapons. Monsters have individual defences, Physical, Acid, Fire, Cold, Electric, Energy, Poison and Psionic. Materials from which weapons and armours are made have differing strengths against each of the defences monsters might possess. Experienced players will keep a selection of armours and weapon made of various materials and select the most appropriate for their character's prey.

The game's character options consist of nine playable character races, each with their own advantages and disadvantages.

Humans are the standard race in the game. They start with average values in all character stat points. They also begin with points in the fire building skill. Humans gain 100% of exp from kills and quests.

The Wood Elves are an ancient and wise race who live in the forest town of Oakenshire. They have very high intelligence, wisdom, and dexterity, but are weaker, and tend to be frail in combat. Elves begin with points in the bows passive skill. Elves gain less experience than humans.

The Dark Elves of Mistwood are an evil race devoted to the demise of the other races. They are xenophobic and cruel, though exceptions do exist. Dark Elves begin with points in the hiding skill. They have all around good stats, though they get less exp than humans.

Wild Elves are a race of elves who are warlike and powerful, less intelligent then their High Elf cousins, but far stronger with better constitution though lower magical ability. Wild elves gain less exp than humans.

Catfolk are a curious race of humanoids with the tails and ears of cats. They are very quick and agile possessing great dexterity but lower strength and constitution then humans. Catfolk begin with points in the dodge skill. They receive less experience than humans.

Halflings are a small race of humanoids. Their natural curiosity has led them into most areas of the continent, and they can often be found amongst the bigger races. They are dexterous but much weaker and less hardy than humans. As a lesser race they receive more experience than humans.

Half-Giants are the offspring of humans and giants. They are very strong, and can take damage better than any other race, but their wisdom and intelligence are both virtually non-existent. Half-Giants begin with points in the fire building skill. Half-Giants gain the least experience of all the races.

The Dwarves are a short sturdy race who are well known for their strength and their skills in blacksmithing, and the making of strong ale. Dwarves have excellent stats in strength, dexterity, constitution, and wisdom, but have rather low intelligence. Dwarves gain less experience then humans.

Goblins are a tiny race of humanoids who live throughout the continent of Xalenia, forming crude tribal societies. They are frail and have terrible intellect, but have fairly decent strength and dexterity despite their size. Goblins start with points in the fire building skill, and gain more experience than humans.

The game consists of five character classes, each with unique guilds (professions) and skills.

Warriors are the all around fighter-class which is mostly concentrated on melee-combat. New players always start as warriors.

Commoners are mainly a non-offensive class with guilds such as blacksmiths and tailors.

Divine Arts are a spellcaster class that uses divine spiritual magic such as healing-spells. Divine arts can also learn some combat skills.