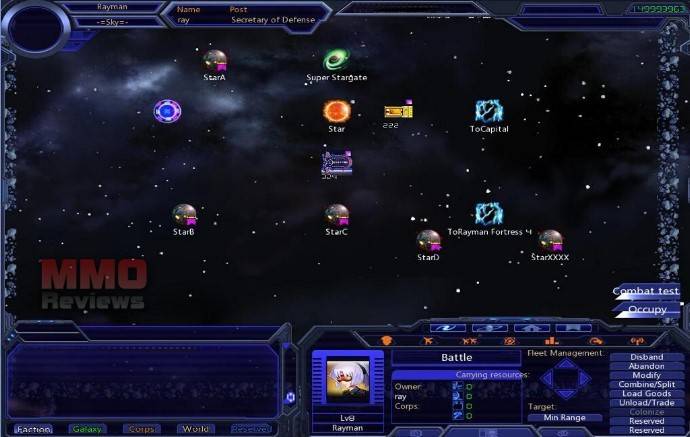 Galaxy Online is a massive real-time strategy, SCi-FI game set in the vast expanses of the universe, where players must piece together a galactic empire one planet at a time. Start out in your own sheltered solar system dubbed ‘home’ and build up your resources until you’re confident enough to send forces to the rest of the universe. Gameplay involves building up the infrastructure of each colony by constructing factories, refineries, depots and other resource extracting buildings. While the game does provide several default warship template, players are free to mix and match modules and create their unique vessels. Combat is done in a turn based fashion and is generally decided by the strength and number of the opposing fleets.

By the 28th Century , with earth stripped bare of its precious natural resources, humanity has been forced to adapt to a new and harsh environment. Reaching further and further into the dark recesses of the universe in search of desperately needed materials, man has finally released himself from the confines of Earth and settled in far away galaxies.

However, as the course of human history fatefully shows, times of expansion are always superseded by times of war. Fighting for the rich resources available in distant galaxies, the powerful Kadry Group, Federation of Eir, Bakran League, Rofilla Consortium, Maya Clan, Rayman Empire... have become embroiled in bitter battles for supremacy and control over the universe.

At the same time, the legend of a mythical location where man’s most needed and desired treasures abound has emerged. It is said that at the center of the universe, vast treasures exist such that should they be captured, their possessor would be able to conquer the universe totally and completely. In their greed, the various factions have stimulated their war and production machines to one aim - to find this treasure and finally take control of their destiny. In their midst, renegade groups of interplanetary pirates have arisen, also driven by the desire to secure prosperity and wealth for themselves and generations to come.

- Free Development Space; In the game, you can lead thousands of fellow players attempting to conquer the universe. You may do business or even act as a common worker to exploit resources diligently and offer supplies to your faction.

- Design warships and fleets yourself; Warships are the most important part of the game. They are not simply machines of war, but a means of transportation, leadership and protection. With various warships, you can found fleets with different functions. You can form fleets to carry goods, colonize unclaimed planets, attack and defend. The design of fleets and warships is in your control.

- Strategy overcome controls; As a strategic game, Galaxy Online attaches importance to players’ strategy and tactics but not controls. Early when you begin to develop your first planet, you should consider carefully what should be done first, what should be done next, as well as every action you may take in the future. How should you gather resources the fastest? How can you develop a galaxy quickly? How can you form a strong fleet? Above all, you need careful planning and consideration. If you study the game again and again, only then can you become an expert Galaxy Online gamer.

- Leisure gameplay not wasting time meaninglessy; Once you have a perfect plan, you won’t need to spend much time in developing your planets. When you deploy your resources, you may even activate the Planet Trusteeship service and the server will help develop your planets even when you are not online. If you do not have much time to play the game, you can spend a few Mall Points to ensure you have a rich game experience, even if your time online is limited. So just make a plan to develop your planets and you will become strong in time.