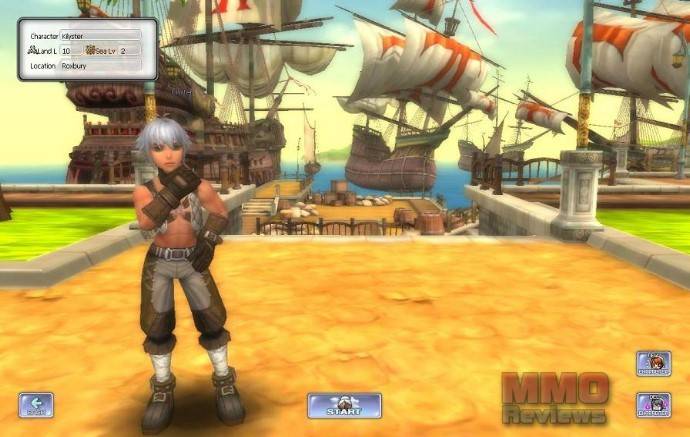 Florensia Online is an anime style free to play fantasy MMORPG with a strong maritime theme where players will be the captains of their own ships as they adventure and explore the world, its seas and its many islands. The game offers PVE, PVP, crafting, guilds and extensive questing making it a feature packed title with a classic theme-park style approach to content.

The world of Florensia was shattered long ago, when the ancestors and their arcane practices burst Lux Plena into thousands of pieces; a cataclysm known only as the Great Upheaval. As an inhabitant of this world there are adventures to be had, lands to be explored and mysteries to be uncovered as you piece together the history of this land.

The core gameplay of Florensia Online focuses on quest orientated PVE content, players will pick up quests from various NPCs and be sent off into the world to complete them, heading to new locations, meeting new characters, fighting strange and powerful creatures, and heading into dangerous locations to recover the greatest rewards. By completing quests and fighting enemies players will level up and improve their character, allowing them to take on even greater challenges in the game. Solo based content is provided for those who like to go at it alone, but some content requires groups and even Guilds of players to complete.

The Explorer – An adventurous sort with a keen eye, they use rifles and dual pistols to take on their opponents, but can turn to their trusty sword when they need to. At level 40 the Explorer can focus on either being an Excavator or a Sniper.

The Mercenary – These fighters lead from the front, always at the front line either with a two-handed sword to fight back opponents or a shield and one-handed sword to offer extra defense to their companions. At level 40 the Mercenary can focus on either being a Gladiator or Guardian Swordsman.

The Noble – Imbued with the magic talents of the ancestors of ancient times, these arcane practitioners mark the aristocracy of Florencia, as well as magic they can use a rapier and hone their abilities with magic. At level 40 the Noble can focus on either being a Court Magician or a Magic Knight.

The Saint – At one with the land and nature they are guided by the spirits that lend their energy to these gifted men and women who in turn can heal others. At level 40 the Saint can focus on either being a Priest or a Shaman.

Players start by making their own character and as they level up will unlock new skills as well as talents to customize their skillset, however, early on they will also be given control of their own ship with more available to craft later on. A player’s talent trees are divided into multiple trees including Land and Sea, allowing players to specialise on being exceptional at land based content or seafaring adventures.

There are five different types of ship that can be crafted in the game: Armored, Assault, Big Gun, Maintenance and Torpedo, each acting as a different class that performs differently in combat, such as the Armored ship being more of a front-line tanky ship with high defenses, the Maintenance ship providing heals to a team, and the Big Gun being a long ranged combatant striking from safety. As with players ship can be equipped with their own gear, weapons and equipped with upgrades to offer them some customization.

Players interested in PVP have a variety of options, from PVP events at set times, open world PVP areas for both land and sea, as well as Guild v Guild battle arenas that provide objective based attack-defend battles.