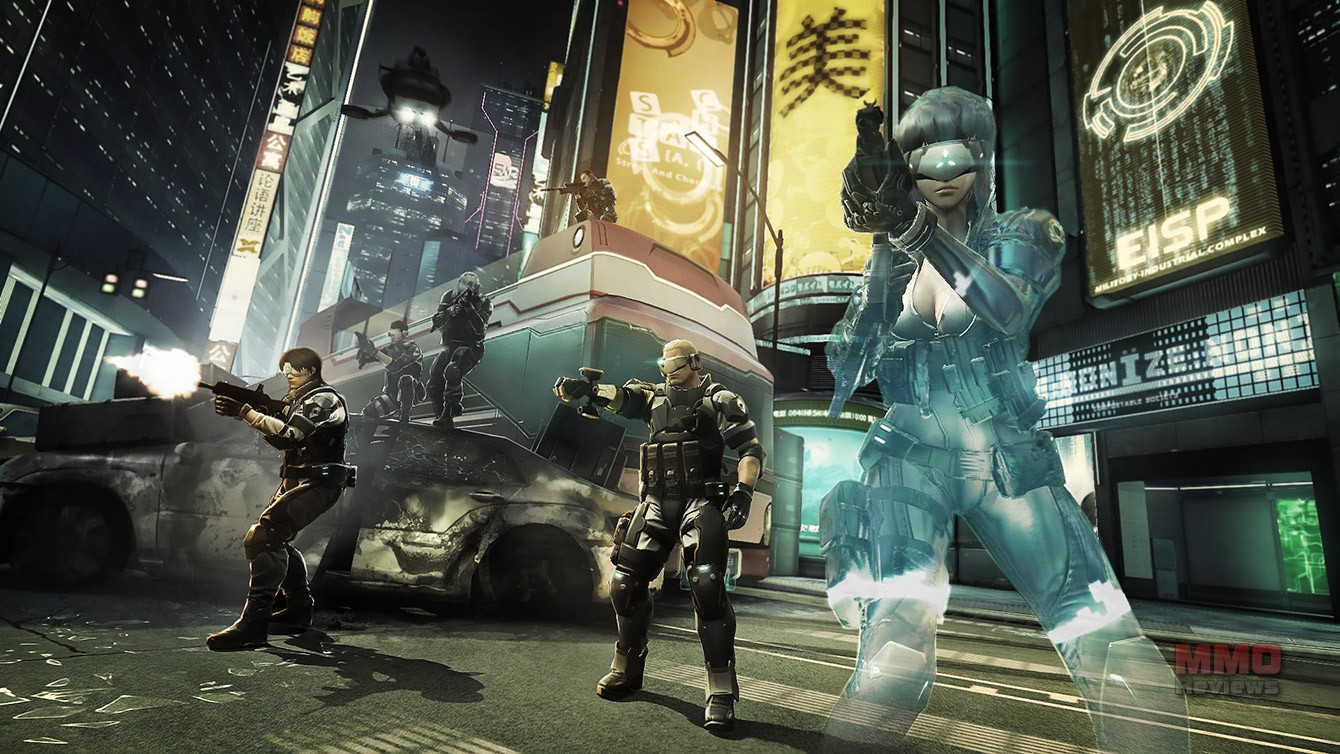 A free to play team based first person shooter in the setting of classic Japanese manga anime Ghost in the Shell, First Assault allows players to step into the iconic roles of Section 9’s most famous characters and go head to head with other players using a variety of skills and weapon loadouts over different maps and game modes.

Set in the mid-twenty first century the world has reached a new level of technological development and even members of the public have become cyberized to allow them to interface with machines and each other through their built in technological enhancements and cybernetic prosthetics. With these high level cybernetics the world has become open to cyber hackers that can fully take control over people and so lead to the formation of Public Security Section 9 and their special ops soldiers to tackle crime and terrorism.

First Assault is a traditional team based FPS that with its main SkillSync system allows for a higher level of customization and strategy amongst teammates and much more competitive coordination. Players fight against each other across three maps and game modes to earn XP to level up their character, as well as TP to improve weapons and gear, and GP to purchase new items, weapons and attachments to make up their gear loadouts.

Each character has a single unique Skill available to them bound to the Q key, to use this skill players must build up Intel throughout the course of a match, primarily earned by killing enemies but also from assists or by completing team objectives. When a players Skill gauge is filled then they get access to their Tier 1 ability, however, this gauge can be further filled to unlock Tier 2 abilities, essentially enhancements of their Tier 1, but can only increase it through player kills.

When reach Tier 2 characters have the ability to Skill Sync with nearby teammates, who will then learn and gain a use of the Syncing characters Tier 1 ability, this allows for some intriguing strategies.

There are a range of characters to play in the game from the show, six in total with two currently unavailable, each has a unique skill and starting loadout to give them their own playstyle when in battle.

Motoko – Kusanagi Motoko is the near fully cyberized leader of Section 9, in a terrible accident as a child she had her body fully rebuilt as a cybernetic prosthetic, that many attribute to her cold and clinical demeanour; she has a Therm-Optic Camo that cloaks her from sight, her Tier 2 allows her to share this ability with her teammates.

Borma – S9’s explosive weapons expert his true speciality is cyberbrain combat and acting as a backup for the team, able to keep himself alive with his Nano-gel Armor that replenishes his HP and armor, his Tier 2 increases this speed and allows him to share the ability with allies making him the only way to heal with a skill.

Ishikawa – another supporting backliner, he’s not afraid to jump into the fray if asked, he has worked with Kusanagi longer than anyone else; his use of a Cyber Sentry makes him ideal for fortifying a point using the ranged turret to keep enemies at bay or helping push a position, for Tier 2 the firing arc increases to 180 degrees and improves its hitpoints.

There are three maps in the game of known locations and area from Ghost in the Shell, including Public Security Section 9, Urban City and District Ruins. The game modes themselves are fairly traditional including a classic Team Deathmatch, a Demolition attack-defend bomb disposal game and a Terminal Conquest where multiple terminals spawn one at a time around the map and must be fought for and defended to capture them.