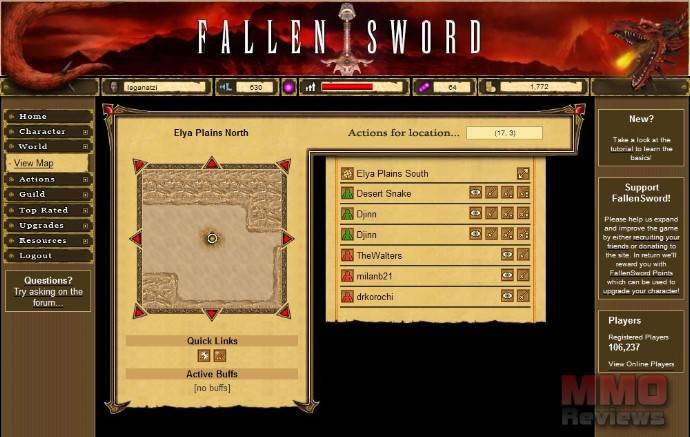 Fallen Sword is a browser-based continuously evolving massively multiplayer roleplay game where you join players across the globe in a world of fantasy and adventure. Traverse vast areas ranging from the Misty Mountains to the mighty City of Xinderoth and beyond. You will battle countless creatures such as Dragons, Zombie Kings, Undead Warriors, Giant Scorpions and defeat them to gain powerful items to arm yourself with as you walk the realms in search of adventure and glory.

You will also be able to engage in combat with other players, become a bounty hunter, craft and create your own items, and engage in countless quests. You are also able to join one of many thousands of player-created guilds where you can meet like minded players and team up to defeat champion and elite creatures. Guilds can store or borrow items and construct guild structures giving its members considerable advantage, strengthening the player to face the horrors found in the world of Fallen Sword.

The ancient world of Erildath consists of four world realms; The North Lands of Eredas where Eribor, a mighty human fortress sits guarding the valley pass. Eribor is home to Iluthar, the Sword of Light. The East Lands of Mora is home to the Elven race along with dark mercenaries. The West Lands of Eagos is home to the magnificent dwarven citadel Mitoa. Finally, the Withered Lands in the south, bastion to the forces of darkness.

Legend tells of ancient times where humans waged an everlasting war against the hordes of darkness that emerged from the deep south, locked in bitter conflict to ensure their lasting freedom against the ruthless Shadow Lord. From his magnificent Ice Fortress of Mogroth, the Shadow Lord began amassing an army that would bring the forces of order to their knees.

The Shadow Lord devised a major campaign that would divide the united forces of light. A massive army of mercenaries were dispatched to lay siege to the Elven fortress Lanslil in the East Lands of Mora. Meanwhile, the Shadow Lord had dispatched five legions of greenskin warriors to invade the West Lands of Eagos, burning and pillaging every village and town they encountered before arriving at Mitoa where they finally laid siege to the mighty dwarven Citadel that stood there.

Taking advantage of the distracted state of the elven and dwarven armies, the Shadow Lord launched a final siege against the human Fortress of Eribor in the North Lands of Eredas, home of Iluthar, the Sword of Light, where five thousand humans along with six hundred dwarves and two hundred elves rallied against the opposing two hundred thousand greenskins that had slowly poured through the Liwen Valley. The seemingly endless ranks of greenskins assembled before the Fortress of Eribor on the fields of Erila. It was on these fields where the free people of Erildath witnessed the fall of Eribor and with it the fall of Iluthar, the Sword of the Light. The absence of Iluthar has enabled the Shadow Lord to unleash his hellish terrors upon the world of Erildath.

Some claim the Shadow Lord hid the sword deep beneath his Fortress in the Withered Lands. Others say the Sword was hidden deep within the Dark Forests of Eagos, the West Lands, lair of the Ice Dragons and home to Edalir, the Dwarf King.

The sword remains hidden to this day, leaving the fate of Erildath still undecided.

Join one of 2000+ guilds currently active in the game, or create and manage your own guild! Strengthen your guild by constructing one of many guild structures to increase the stats of all your guild members.

Auction off items you have gained through player trades, quest rewards or creature drops! Alternatively use the comprehensive auction search feature to find higher quality equipment for your character!

Start your journey across the world of Erildath, travel through more than eighty different realms from the Forgotten Forests to the Undying Lands!

Gain skill and level up points by gaining experience. You can then assign these points to one of many player skills and statistics available.