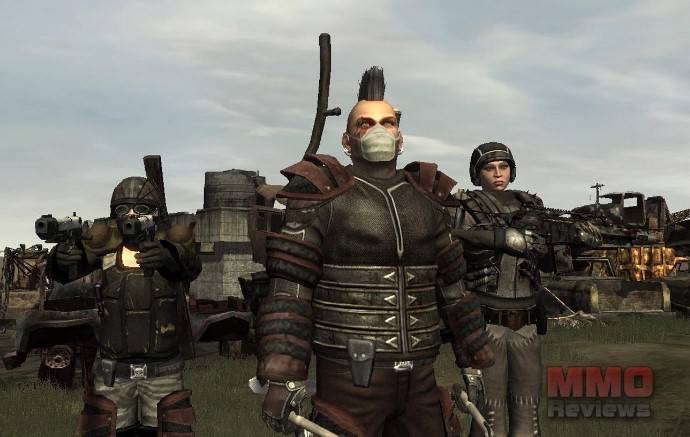 Developed by Icarus Studios for Windows.

Fallen Earth is a free to play massively multiplayer online role-playing game set on a post-apocalyptic Earth in the year 2156. Within the Grand Canyon Province, an isolated pocket of settlements around one of the world’s most amazing landmarks, you’ll face threats to mankind’s continued survival, including everything from irradiated zones to mutated beasts to raiders. Six factions struggle for dominance in the Province. Over time, you’ll have the chance to pick a side in the effort to hold sway over what remains of the post-Fall world.

The Fallen Earth' story begins in the 21st Century, when the first in a series of natural disasters hits the United States. As Americans struggle to recover, an investment tycoon named Brenhauer buys a controlling stake in a mega-corporation named GlobalTech. By 2051, he moves his headquarters to the Grand Canyon Province, where GlobalTech eventually creates a self-sufficient economic and military mini-state. Meanwhile, in India and Pakistan, the Shiva virus, named for the dance-like convulsions that it caused in its victims, appears among the human populace. As the infection starts to spread, countries accuse each other of engineering the virus. Political paranoia turn to open aggression and nuclear conflict. The nuclear conflict combined with the virus decimates the planet. Less than one percent of Earth's population survived the Fall, and the Hoover Dam Garrison and Grand Canyon Province are the only known outposts of human civilization.

Outside the protective confines of the Hoover Dam Garrison, the player will encounter ruins of the old world, genetically-altered creatures, strange technology, and six warring factions. Some factions seek to rebuild the old world, others wish to build a new one in their own image, and some simply desire chaos and anarchy.

Combat in Fallen Earth is generally in a first-person shooter format. The camera can be moved to alternate between third and first person modes. Players will need to manually keep their targets in a targeting reticle to actually hit them in combat. Skills can be used to influence combat in different ways, but again, enemies must still be manually targeted. It has been stated that there will be no "target locking" as in other MMOs.

There are three main methods of dealing damage in the game. These are broken down by weapon's effective ranges. Rifles, pistols, and melee are the primary weapon types. Rifles specialize in long distance damage, but are capable of using some short distance weaponry. Pistols are considered the most balanced of the weapon types, able to do damage at medium to short range. Melee is the short range up close damage.

Players start out neutral in Fallen Earth and can remain neutral or choose to align themselves with a particular faction. Aligning with a faction will give characters a head start in skills and equipment that the faction specializes in (eg. they will have easier access to learning certain skills). There are also a number of NPC factions that players can build alignment with. Helping or disrupting factions will affect the player's relationships with them. Killing faction members can also influence your faction alignment.

The alignments of the 6 main factions can be arranged into a "wheel". Each faction has 2 allies, 2 enemy and 1 arch-enemy faction, with the arch-enemy being the faction on the opposite side of the wheel. Primary factions also have a number of sub-groups that hold to various motives and differences in ideology. While some of these sub-factions are known, many are secretive and will only reveal their existence to those they trust. Characters can become members of a sub-faction and gain special titles, abilities and equipment. Some sub-factions are mutually exclusive, but not all are.

Factions are: CHOTA (Children of the Apocalypse), Enforcers, Lightbearers, Techs, Travelers and Vistas.

As you progress through the adventures in Fallen Earth, your character will be able to learn and improve essential skills and unique abilities, such as how to use a weapon, treat an injury, develop special powers, or dodge an attack. These skills and abilities fall into four categories.

Stats
which are a way of measuring abilities, come in twelve major categories, which relate to physical endurance, mental dexterity, social magnetism, creative intelligence, technical ingenuity, and an aptitude for using extra-sensory abilities.

Mutations
may have been caused by the Shiva Virus, or radiation exposure, or maybe they are the result of deliberate genetic manipulation. Most likely, it was some combination of all these factors that created the different Mutation Paths available to the denizens of the Grand Canyon Province. Each Mutation Path falls into one of three fundamental types: Augmentation, Restoration, and Destruction. Activating Mutations costs Gamma, a representation of your character’s mental fatigue.

Tradeskills
represent a character’s aptitude for crafting and fixing everything from rifles to computers; Tradeskills even include things like cooking stews and brewing up poisons. The better your Tradeskills, the better items you’ll be able to craft.

When the last grocery store closed its doors and the final mall followed the polar bear into extinction, people once again needed to produce their own food, medicine, and weapons. The Fallen Earth crafting system represents this self-sufficiency: Characters at all levels use Tradeskills to scavenge components and construct items for use, trade, or sale. The most dedicated craftsmen can improve their Tradeskills and produce the best gear available in the game.

Fallen Earth offers a variety of subscription levels, from the F2P "Scavenger" to the ultra-deluxe "Commander." Free players face a few restrictions, including crafting limitations, no access to global chat, only one character slot, and a slower rate of gaining XP and AP. The better subscription levels offer discounts to the game's store, faster progress in the game, monthly gifts, and a full range of features.

Subscribers also receive an in-game "aura," that allow them to share some of these bonuses with their less-fortunate F2P friends. 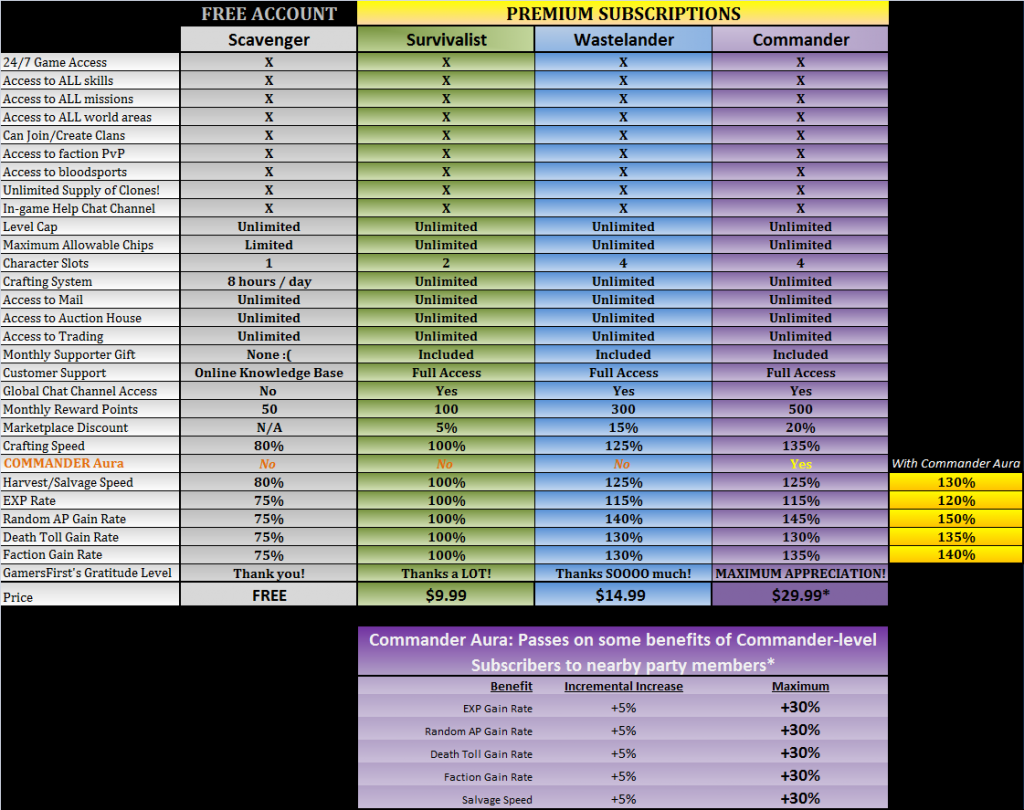