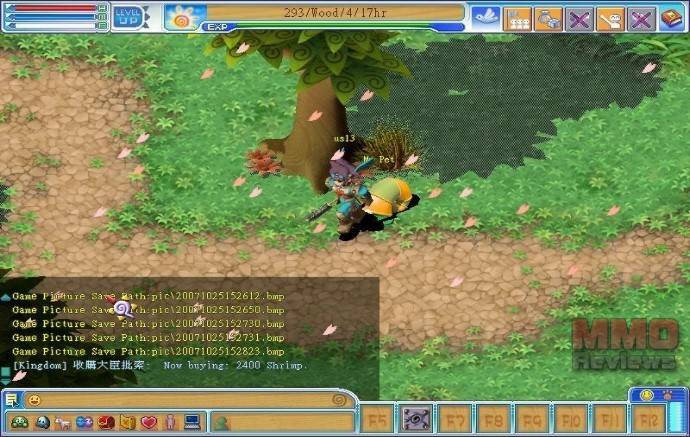 Developed by Lager Network for Windows.

Fairyland Online is an old MMORPG with classic turn based combat and random encounters. Years ago it required a monthly subscription but has been relaunched as a free to play game supported with optional micro transactions. In Fairyland Online players fight along side various pets and can collect special titles & dolls.

- Occupations; The world in Fairyland have three big occupation system: Journeyman, Diviner and Soldier. All the new created persons have no special occupation at the beginning of game, call it as the civilian. The player can join the consortia finally by the process of the apprentice, then proceeding the official work.

- Trial-Occupations; The players can find out the guides in each town center's doorway of newbie’s village. He can help you to join to trial-occupation, to become the one of trial-soldier, trial-journeyman and trial-diviner, at the same time give you basal skill of this occupation. Then if you are critical of trial-occupation, you can give up at any time after come to seek the guides again, and choose the new trial-occupation.

- Formality-Occupation; When the person promotes to above 10 grades, it can choose the formal occupation to study more special skill. However, after choosing the formal occupation, you can't changes, and must be faithful till death. Different occupation have the different weapon for using and equip for defending, so the player can't spend the money at the thing that can't use! When you choice the occupation, you had better consider the personal attribute, for example: Power, nimble high, but the low intelligence person is fit for the warrior, don't join the journeyman consortia. The Same truth, the person of high intelligence, power, nimble all low, if it be the warrior, probability of return to the hospital also would be very big.

- Pet System; In the world of Fairyland, there are kinds of special creatures called pets. These creatures are inseparable from the inhabitants of Fairyland. They have a unique bond with their human, elven or dwarven masters. Normally these pets roam wild in the countryside of Fairyland's vast world. The higher a pet's level or rank, the more difficult it is to capture and tame a pet.


There are plenty of quests to complete and three races to chose from: Human, Elf, and Dwarf.

Human – Human is the most versatile race, with no apparent strengths or weaknesses.
Elves – Elves are an ancient and magical race.
Dwarves – Dwarves are an earthly and secluded race.

Each race has a different distribution of six stats which best suits them for one of the game’s three class types once they reach level 10:

- Journeyman Classes;  Varied and don’t have much in common besides sharing constitution as an important stat.

Mage -> ArchMage - Masters of the 5 elements; Mages use elemental spells such as fire to inflict damage .
Acolyte -> Schemer of Darkness - Schemers draw the life from their targets, cast poisons, curses & other nefarious spells.
Acolyte -> Architect of Light - The holy class with healing and supportive spells that aid allies in battle.