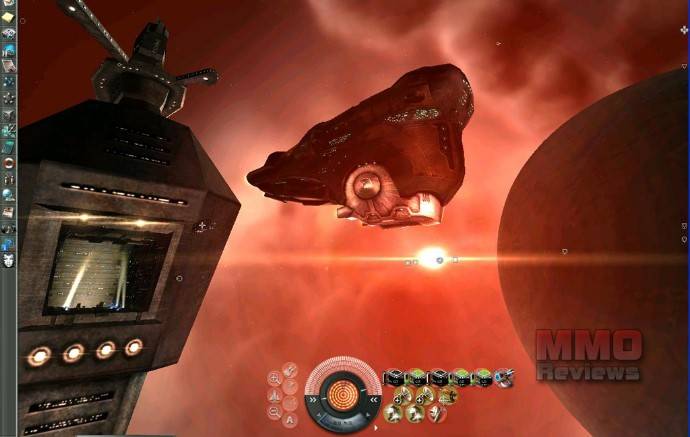 EVE Online is an in-depth MMORPG that offers players the chance to live in and explore the massive open sandbox galaxy of New Eden, to choose their own path, to be what they want to be. With high levels of exploration based content, multiple PVP and open world PVP features, resource gathering, crafting and trade that all add to the inner workings of a complex player driven economy; EVE Online is its own evolved online world. With the arrival of the Ascension expansion players are now able to try out the game with a free to play account with restricted features.

Thousands of years ago mankind discovered the EVE Gate, a wormhole that lead to a new galaxy known as New Eden that prompted a mass colony effort as millions went through the gate to leave behind the struggling Earth. The EVE Gate collapsed and those brave few were lost forever. Over the millennia these survivors evolved into four versions of humanity, four different factions, which are now locked in an endless battle for New Eden with their clone warriors fighting each other in technologically advanced ships; you are one such clone.

The core of the game provides an MMORPG environment where players can live as a “Capsuleer”, a pilot who has sworn themselves to one of four major factions: the Gallente Federation, Caldari State, Minmatar Republic and the Amarr Empire. As a part of their faction players will immediately be seen as the rivals of the other factions, and typically the direct enemy of one of them (Caldari and Gallente are at war, as are Amarr and Minmatar); EVE Online is a galaxy at war and nowhere and no one is safe from combat. Whilst there is a heavy focus on combat and warfare, one that everyone will feel the effects of at some point, players can choose their own path and focus on anything from being a pure mining ship, a cargo hauling vessel, a scavenger ship seeking out old wreckages, an explorer that can hack discovered info-terminals, or a pirate hunting down other lucrative player kills.

The game offers a lot of non-combat options, particularly in its gathering-crafting-trading systems which have provided a robust player controlled economy in the game, intriguing node hacking systems for explorers and ship scavengers, missions to carry valuable cargo between systems; there’s a lot to do. PVE is equally viable and with missions from Agents players will be sent to deal with AI pirate menaces and threats, in turn being rewarded for their efforts with currency and items; however, whether mining, fighting AI in PVE, or transporting cargo, players are never safe from PVP.

EVE Online offers a war-torn galaxy and nowhere is safe (although some places are safer than others) from the threats of other players, with no traditional “safe zones” it doesn’t matter if you don’t want to engage in PVP, at some point players might want to engage in PVP with you. Mining solo on a low-sec (low-security) system where some of the most valuable resources can be found opens players up to player pirates hunting down easy kills; destroying a player’s ship allows the victorious ships to loot the wreckage and take all the cargo, equipment and upgrades the defeated player had on their ship (providing they weren’t destroyed in the battle). High-sec systems are protected by AI controlled guards known as CONCORD, who will appear when crimes are committed and try to deal with the criminals; but for the chance at some valuable loot then it might be worth the risk!

FREE TO PLAY AND SUBSCRIPTION OPTIONS

Players are able to check out EVE Online for free with an Alpha Clone account, giving them access to the full game with some restrictions to levelling and the number of accessible ships. To become a full “Omega Clone” players must apply a subscription to their account using PLEX; an in-game physical item that can be traded between players. PLEX are bought using real cash and used to add to your own subscription game time, or sold to players for ISK in-game currency (providing an approved method of purchasing currency), also allowing players to simply acquire ISK and subscribe/purchase PLEX without paying real money.