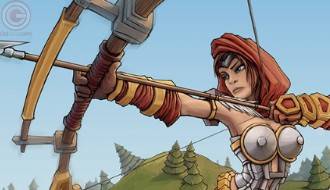 Epic Arena is a free-to-play multiplayer 3D MMO that blends a card, board and tactical game into one unique title. This combat game will put players’ cunning and their strategies to a test with its tactical and reflective game play. Its asynchronous play allows for engaging in multiple battles at once and playing on any device with internet connection.

The goal in Epic Arena basically is to eliminate the enemy team or destroy all enemy artefacts. When starting out, players are given a random set of six cards which are drawn from their team's units, their gear or their power-up cards. For each turn, they have five Action Points that can be used. Every time they deploy or move a unit, add gear or armour, use a power-up, attack, heal, or revive an ally, one Action Point is required.

In the game, the teams are composed of decks, each one having a unique set of characters and power-ups. Each decks include different types of cards that can be classified as defender, shooter, support, caster, super unit, team artefact, potion, armor, weapon, spell and supercharge. Players can challenge a their friends and choose the same team decks.

There are two teams available for now:


The game features two types of damage and defence: magical an physical. Each unit is not only classified in regard to its damage and defence type, but also has its own move range, that is the number of tiles a unit can move per one action. Some units are able to fly or teleport, this way ignoring obstacles on their way. In addition, units have ranged and/or melee attack. Units solely possessing a melee attack generally cause more damage the closer they get to their target. Units with ranged attacks generally cause more damage the farther away they are from their target.

Players are able to add weapons, armors or consumables to their units. While the gear, such as helmets or shields are permanent, others, like potions for example, are consumed. Gear and power-up cards also differ regarding the effect range, meaning that some can be targeted on any tile of the arena while others are area-of-effect cards that only cause damage within a specified radius.

Players have the possibility to purchase Power Cards which allow for greater tactical advantage and adds wider offensive and defensive possibilities. They can be purchased by anyone and used by any team. However, once a Power Card is played in battle, it will be removed from the player’s collection so they will have to use them wisely, build a war chest, or buy replacements in the store.

The game features two unique arenas: Sanctuary and Coliseum. In the arenas players are able to change the viewing angle, rotate the battlefield or zoom in to the action. By mixing and matching environments and game boards, it’s possible to keep the game interesting both visually and strategically.