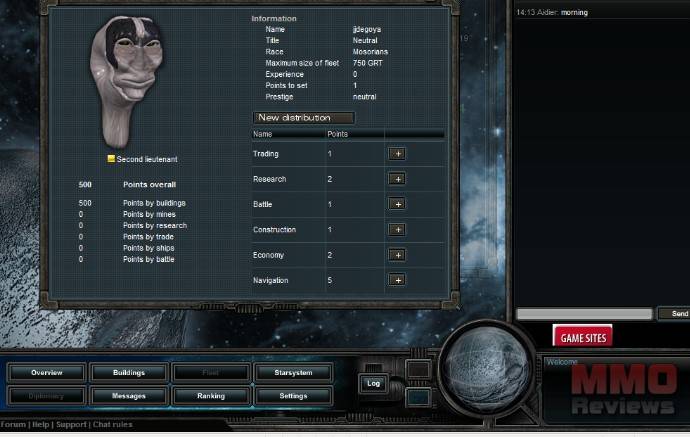 Empire Universe 2 is a space browser-based Massive Online Game where you can chose your own path in the galaxy. Choose from 9 different races with their own unique stats and starting places in the galaxy map. Collect 10 different resources via mining asteroids and wreckages or through your planet's resource mines, customise 21 different spaceship chassis with over 66 components allowing for a lot of room for experimenting. With 146 different technologies to research it is a long spanning game that cannot be either won or lost. There is a strong focus on allied gameplay and it promoted teamplay whether you decide to join one of the many empires out there or create your own. Use your warships to fight real time battles against hundreds of opposing players and train ground troops to act as your last line of defence for when all your warships have been destroyed.
Choose your alignment, through the actions you take in the game you can become a scientist, pirate, warrior, trader and bounty hunter. With over 120,000 planets in 10,000 sectors there is plently of space for everyone.

For the first 30 days you can build up your planet, research, mine resources etc. safely with nothing to fear: you cannot be raided by anyone. During this time your planets are fully protected, however your fleets can be attacked based on the bashing protection rules.

After 30 days, noob protection will end, regardless of how many points you have. After leaving noob protection at 30 days, you will enter bashing protection. This will end after reaching 250,000 points in highscore.

Jamozoids
The Jamozoids once were a nation very bond with nature, a nation that lived in symbiosis with themselves and their world. This was symbolized through an emblem, which reflected the origin and the unity of the people.

Weganians
The Weganians are a monument of a species' will to survive. Their metabolism differs completely from that of other breeds. A few centuries ago an insidious disease, which attacked the central nervous system, threatened the planet of Wegan.

Magumians
Little is known about the mysterious Magumians because their underground cities hide before the eyes of foreign nations. The Magumian community is divided into individual clans, which originally used to manage farms and mines cooperatively.

Humans
The origin of humanity lost itself lies in the mists of the past. It is known that the people had to adapt to very different climatic conditions in the course of their evolution. For this purpose, people have always been organized into trivial associations. This lead to very adaptable structures.

Cyborgs
The cyborgs have the same origin as the human race. They inhabited the same planet, had the same humanoid body characteristics and even shared the same curiosity along with ingenuity. They used to be once human of flesh and blood. But humanity was careless with their planet.

Ozoids
The Ozoids live in a strictly hierarchical tribal culture in which the best individual in a network of personal obligations and loyalty reigns. This authoritarian tendency of their culture made the Ozoids the born fighters. This philosophy is reflected in their ship's design which uses excellent offensive systems, but weaker defensive measures.

Mosorians
The Mosorians come from the planet Heyao VII, a world heavy tormented by storms of gas. The Mosorians developed primitive technologies that allow them to use their planet's strong wind forces for aerial movement. The caste of wind riders that emerged from the first pilots is considered as the backbone of the Mosorian fleet.

Zuups
The main culture of the Zuup evolved from nomadic people. Raids, tribal feuds and cattle formed the basis of their society. With an increasing mechanization, the Zuup abandoned their nomadic existence and evolved under the reign of their warlords to a mighty warrior race, still the proud Zuup maintain this heritage to this day and pass it on from one generation to the next.

Plentropian
The Plentropians may not look like it, but these creatures are the true geniuses at the screwdriver and the best inventors of the universe. Strangely their abilities evolved from the nation's passion for racing and betting. Young Plentropians had already learned first mechanical basics before they knew how to write. Every place has its own inventors competition, which is supposed to animate the Plentropians' inventive spirit.

Your account wont get deleted until 30 days. You will receive several emails with a reminder, that your account will get deleted after that 30 days. If you have Premium, you don't have to bother, you are safe for any deletion in that way.