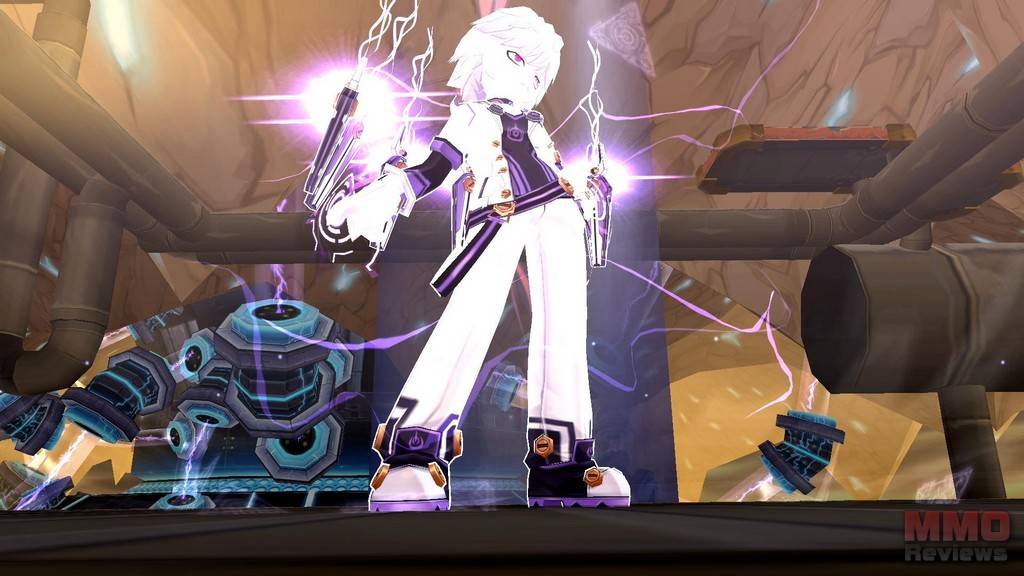 Elsword is a fast-paced, multiplayer online action-packed beat ‘em up, combining super slick combat and easy to master controls with wicked anime-style graphics. Take on the roles of Elsword and his friends and go through hundreds of quests and watch your character grow from a young adventurer to a battle ready hero. Level up to specialized job classes and shape your destiny.

- Start a party or go solo through hundreds of quests to develop your character.

- Play in co-op mode against the evils of Elsword's world or compete for ranking in player vs. player mode.

- Awesome attacks and combos. Pull off some of the coolest combos with an easy to master 5 button control scheme.


- Special weapons, costumes and other items are available to make your character both powerful and unique.

Elsword - Elsword is a master swordsman that excels at close range combat. He's quick on his feet and can hack and slash with the best of them. Not only can he dish it out but he can take a lot of punishment as well. His only real weakness is magic but in his mind, there's nothing a sharp piece of steel can't beat.

Aisha - Aisha is a mage who relies on her spell casting abilities (active skill) to inflict major damage to an opponent. She also has the abilities to attack multiple targets at once. All of the Mage's spells are elemental, meaning she can gain an advantage by tailoring her attacks to a monsters natural element. In hand to hand combat, she favors the staff.

Rena -Rena is a marksman with ranged weapons but can call on the elements to fuel her magic attacks as well. When cornered though, she has no problem striking enemies with her awesome kicks. She also has the ability to seemingly fly through the air with her double jump.

Raven - Raven was a fellow commoner with a troubled past. He was disliked by noblemen and it was only a matter of time before he was framed right to prison. When his fellow comrades and his finacee broke him out, they were all killed right before his eyes, and he was left to die. He was rescued by the Nasods, who instead corrupted him with Human-Nasod argumentation via a mechanical arm; the AI programming was imperfect and therefore drove Raven to insanity. The arm drove him to vengeance, only to be thwarted by Elsword and company: Raven believes he can atone what he had done by joining Elsword.

Eve - Eve, an upper-class Nasod, was once called 'The Little Queen of Nasods'. Her nation relied heavily on the power of the El, and when that power declined, a war between Nasod and Humans broke out. Eve went into hibernation and slumbered for thousands of years. One day, she woke up when an El Shard accidentally entered her preservation unit. Saddened and alone in the present time, Eve decides to restore the missing El, in hopes of reviving the Nasod kingdom.

Chung - Chung wields a cannon called the Destroyer and comes decked in full body armor called the Freitunier. In spite of his young and delicate looks, he can freely handle the big cannon with a tough combat style. His creed: no innocent human will get hurt under his watch.

Ara - Expert in martial arts, Ara is blessed by the abilities of the nine-tailed fox. She possesses great physical skills, swift attacks and agile moves.

Elesis - She is a fearsome knight equipped with a huge claymore sword and Elsword's big sister and mentor.

Add - This male character focuses on casting. He makes up for his weakness against physical attacks with explosive damage output and a dynamic combo system.

All that hard work training and practicing new combo's needs to be displayed somewhere! Elsword provides players with a competitive PVP system with a real-time ranking structure. Casual gamers can take a quick dive in and tough it out with other casual players, while hard-core gamers can fight to stay on top of the ranks. In addition, players can rack up Arena Points (AP) to buy items from the arena store.