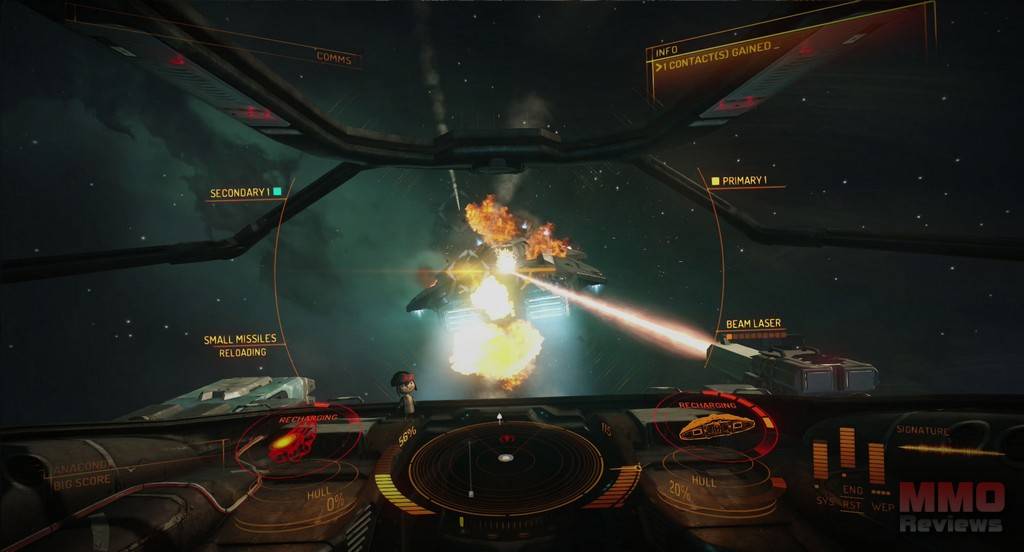 After 30 years since the initial Elite game was released, almost 20 since the last title in the franchise, Frontier Developments are now planning their newest MMO title in the franchise with Elite Dangerous; a fast-paced pay to play FPS space simulator. As the pilot of their own ship players get to define their own role in the Galaxy, carving out their own path as a pirate, bounty hunter, trader or more and working for three Galactic superpowers with entire star systems falling under their banner.

Elite Dangerous is a new sandbox space shooter where players start as a pilot with only a handful of credits, the most basic starship money can buy and a dream. The galaxy filled with intrigue, anarchy and war each player will choose their path and whether they try to be a force of good and helping out those in need or taking advantage of the weak for their own personal gain. Seek out distant wonders as an explorer, become a renowned trader taking your wares between different star systems or prey on the unexpected travellers as a pirate. Players will make friends and enemies alike as they advance through the game, increasing their abilities and their ship on their journey to becoming an “Elite”; the most feared starship pilots in the Galaxy.

Throughout the game new dynamic events will occur in various star systems that players are able to respond to, their own personal involvement will change the course of the future for planets, systems and factions alike. Travelling around the Galaxy it is highly possible of coming across an untapped resource, such as a lucrative asteroid in an as of yet unclaimed star system. It is well possible that this discovery may be found out by two nearby rival planets who send out their own armadas to lay claim to the sector. With this event players will be able to choose either side to fight on, the victor ultimately claiming the asteroid for themselves and annexing the sector into their own Empire. That said whilst these two great factions bang their chests at each other, the sneaky and daring pilots may try to mine the resource from under their noses whilst they are otherwise occupied!

The game has a number of different options for both PVP and PVE, the core of the game will always have PVE missions for players to take on as well as freeroaming sandbox PVE and dynamic events, there is even a single player mode that players can join off-line (though has no bearing on the online game). There are a variety of PVP modes available and various PVP focused systems in place to tackle troublesome players such as the bounty hunter system. However, players will also be able to choose which groups of players they interact with, either private groups or free access to play with anyone and everyone and letting players control their own game.

One of the key features of the game is ship to ship combat, seen in PVP and PVE, players will be able to customise a variety of ships and modified different hard points to equip them with different items, accessories and weapons including lasers, missiles and other ordinance to take down enemy.

In the game players ships can take hull damage, though it will take a lot to stop a ship from being able to fly, they can leak their cargo for other players to then pick up. Derelict ships are fully lootable when players come across them, however be cautious as many a curious pilot has been lured to such potential profit only to find it was a pirate ambush!

Elite Dangerous will continuously have new updates and features added to the game for free and larger expansions which players can either purchase individually, by a expansion pass or be able to access for free if they have helped back the game through Kickstarter and paid a certain backing tier.