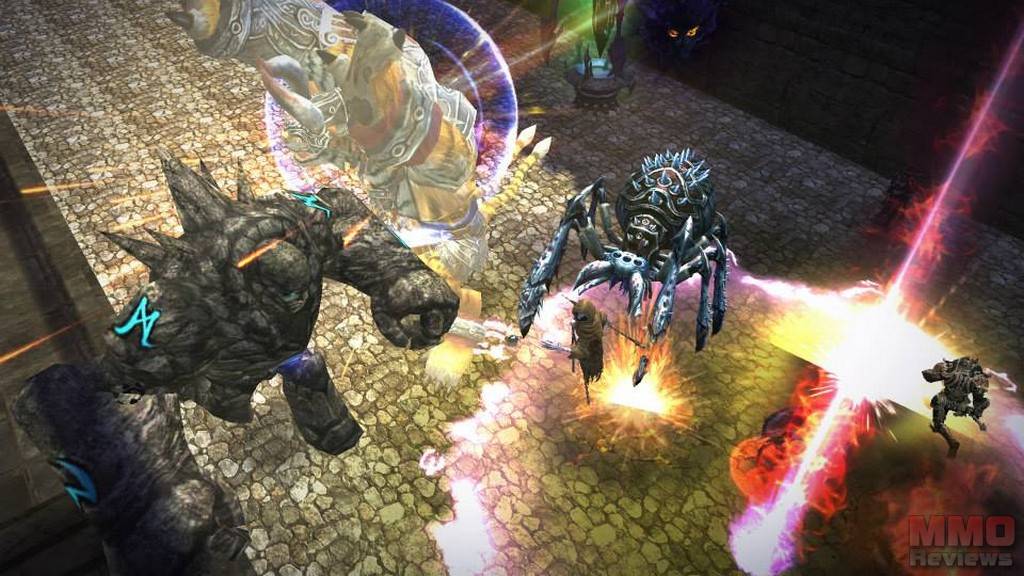 This free to play fantasy-based MMO is set in a vast world at War between two rival factions that players can explore as they uncover powerful transformation cards and with them the ability to turn into beasts and monsters to aid them in their quests.

After the Shadow War the lands of Karis were left in ruins, the fight between the holy light and the Malignant Spirits and the Drain taking its toll on the world itself and on those races that defended it. The Rumen and Kaligo now stand divided, the Bloodmoons, Humans and Drains fight each other for control over the continent and dark forces threaten to once again return.

The war between the Kaligo and Rumen now runs strong, each in search of the prophecy, each being born from the holy light, but each now taking a separate path after the dark magic of the Shadow Steal has divided them and once more they clash on the battlefield.

The two primary races that players can choose from are:

The Rumen: born of the holy magic these virtuous paladins of light battled the Drain and Malignant Spirits in the hope to drive him from Karis, and though the efforts were successful for a time this enemy threatens to return. Lead by the brave servant of Holy Nova, Lonis, they rally elite soldiers to scout out the prophecy.

The Kaligo: also originally born from the Holy Magic of Nova, they were one with the Rumen, but their dabbling with the Shadow Steal magic has corrupted their flesh. Whilst their acts helped battle the Drain on the Day of Promise, they have sacrificed their homes and loved ones as they were exiled from the lands and now fall under the guidance of their leader Patroe.

Players have four classes to choose from:

The Magic Stormer: a dangerous and devastating wielder of magic that battles against their opponents in melee combat with fearsome high damage assaults and magical curses.

The Battle Priest: trained in a number of ranged powers to fight enemies they are also the most proficient of healers, capable of healing their own wounds and those of their allies.

The Warrior: adorned with armour and a large sword they are the strongest of classes able to deal powerful physical damage whilst maintaining strong nearly impenetrable defences.

The Hunter: this long ranged damage dealer is a danger on the battlefield for those unable to fight with ranged attacks, using his hand cannons this single targets combatant is to be feared.

Each class can be customised with a variety of different skills and talents to create unique hybrid templates that will offer different styles of play.

Whilst out on their adventures players can occasionally loot powerful transformation cards from the various creatures and monsters that they will fight on their journey, these cards give the player the ability to turn into these creatures in battle. When a player transforms both their physical appearance and their abilities and skills will change, essentially turning them into a different class all role that is better suited to their current task at hand. There are over 700 transformation cards to collect which offers up an impressive amount of combat strategy for both PVP and PVE.

Every different species has different bonuses and setbacks depending on their current environment as well as whether or not it is day or night, some creatures are more powerful in their natural habitats during the night! Depending on your current quest and your missions’ target players can utilise a variety of different transformations to get the job done.

In Eclipse War Online players can take part in full-scale PVP in the battle between the Rumen and the Kaligo, players fighting for their own side in an open world PVP setting where they can arrange ambushes on unsuspecting players. Players also have the option of fighting in instanced arenas where they can arrange team battles against other players to show off their skills and abilities, as well as having a three lane AOS style PvP game including towers and minions that players must fight.