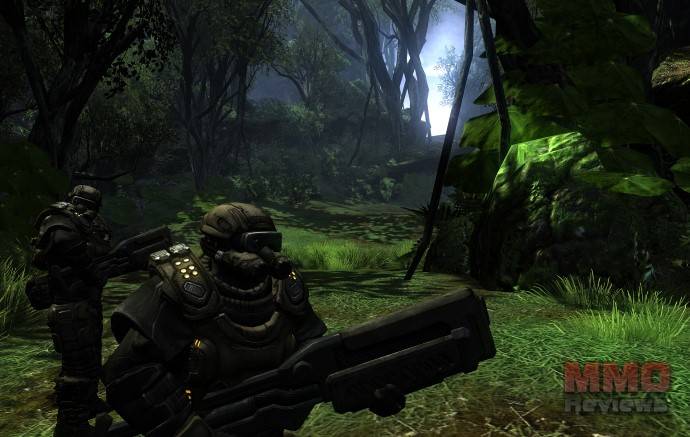 Developed by Masthead Studios for Windows.

Earthrise is a post-apocalyptic science fiction MMORPG, set in the dark future of the planet Earth. Featuring a unique skill-based advancement system and player-driven economy, as well as extensive, meaningful player-vs.-player combat, Earthrise gives you innumerable choices to forge your destiny. Whether you're a noble soldier in the raging conflict between the Utopia and the rebellion, a criminal hiding from the law or a world-renowned engineer whose power extends into intricate trade and politics, your actions will echo throughout the game world.

In the aftermath of the Third World War, mankind has managed to survive and build a new society: the prosperous city of Sal Vitas. Cloning, nanotechnology and quantum engineering are part of a new reality. Thanks to these technological advances, the human species has become immortal; each individual’s consciousness is stored in a data vault, ready to be uploaded into a cloned body as necessary. New energy sources have been discovered. There is a unified government that takes good care of those citizens who abide by its strict laws. Paradise, it appears, might really have come to Earth, and the people have embraced it.

But not everything is as perfect as it appears. By exercising full control over the cloning process, Sal Vitas' government decides who will live and who will not, playing the role of God on Earth. Insurgent forces have accused the city's rulers of crimes against humanity. Armed factions fight for resources and power within the new system. And from the waves of discontent, a rebellion has fomented and formed a shadow government: Noir.

Continoma
They are the saviors of humankind on the island of Enterra and have established the new society and government, hosted in the city of Sal Vitas. They have some negative traits associated with the great governmental power, but are not necessary evil and succeed to provide their citizens with security and technological prosperity.

Noir
They fight for freedom against the chains of Continomian laws, but their means of resistance are often radical and cause innocent people to suffer in the name of their cause.

- A unique post-apocalyptic setting where the cloned remnants of mankind battle to survive and rebuild. Yet while humanity may have evolved, human nature remains as treacherous as ever…

- Highly customizable characters with over 100 different skills, abilities, and tactics. No artificial "class" restrictions get in the way of making the character you want.

- Sophisticated Player versus Player (PvP) mechanics that let you fight for the established order, join the revolutionary underground, or carve your own bloody path as an independent criminal.

- Territorial conquest and defense that matters. In your domain, you create your own rules – or let anarchy reign.

- Character progression that keeps you advancing in your career even when you’re not logged in.

- An advanced market-based economy with in-game supply and demand based on player activities.

The outcome of battle in Earthrise will rely more on the traditional RPG system, where avatar skills and equipment are important. However the combat will be more dynamic, resembling a third person shooter. The game will require a certain level of player skill in movement and targeting that is becoming increasingly popular trend in current wave of MMOs. Still, not every action will have the same requirements. Some actions will require proper targeting of the opponent, while others will require only having it in sight and then there will be actions that can be executed even if the player doesn’t have its target in sight but within range.

Players will have the opportunity to kill other players(including from his faction) – but not without consequences. Killing people of the same faction is one of the worst crime, prosecuted by members of both Noir and Continoma. It will be very difficult for someone to clear the damning effects of such a crime, though not impossible, and his space of operation would be greatly limited in the wild, less secure areas - where he himself would taste his own medicine by being open target for other criminals. Each player's criminal actions, once reported through the Continoma SVS Network will affect the behavior of every guard the player encounters. There will be cases when despite guard activity, the actions do not get reported island-wide. For the most prosecuted player killers that means that their life in a sizable portion of the game world will be constant game of cat and mouse, and other players will certainly benefit from joining in as there will be rewards to take a criminal down. Stealth abilities will be almost a requirement for survival. We won't force that sort of gameplay on players and it would be easy to get on good terms with the government. Player who has killed another player opponent would be able to loot his possessions. There will be available equipment protection, but its viability will vary based on character's affiliation and actions in the game. Characters who play "against the system" should learn to protect their gear well. There will be some high security areas in Earthrise, where guards will attack on sight everyone else who tries to attack another player. People, who don’t want to engage in PvP will feel secure in these zones. At the same time, the most dangerous parts of the island will feature free for all PvP.

Another PvP aspect in Earthrise will be guild rivalries. Guilds will be able to declare war on each other and fight for power and resources. Such wars will be prohibited in the security zones, but will not be punished in the other territories. Guilds will be able to conquer their own part of the island, gaining access to resources and a territory where they can impose their rules. There will also be arenas and other types of PvP competitions with rewards. People who do not want to engage in PvP will not feel alienated in Earthrise. There will be certain areas in the game, where PvE skills will be more important than PvP. Quests, crafting and trade are other examples of the non-PvP gameplay in Earthrise.

Crafting in Earthrise is a complex process that is easy to understand but ultimately difficult to master. The basic rule of crafting is that every item is made of components and every item can be broken down to its composites. Some components are used for specific items, others are used in a wide array of items – for example, a hand gun grip can be used in the creation of various hand guns, while electronic chipsets can be used to create specific devices. Players often will break down items to their components in order to combine some of them with other components to produce new, different items. Crafting and salvaging requires specific skills, depending what item is created or salvaged down, and players will have access to dozens of skills, covering mechanics, electronics, engineering, construction and programming in several futuristic industries. Here is a quick and simple example – let’s have two hand guns, a simple “Kruger” and an advanced “Raider” with electronic aiming. Using his weapons engineering skill, a player can deconstruct “Kruger Hand Gun” down to “Hand Gun Grip” and “Kruger Mechanism”, and then combine the “Hand Gun Grip” with “Raider Mechanism” and “Raider Aiming Processor” to produce the electronics-assisted “Raider” hand gun. Often complex items will require several tiers of components construction before the player can create the final product, and each of those components will require different skills to craft. We want to make most complex and powerful items in the game a serious crafting investment, often requiring two or more crafters or varying skills and expertise to work together in order to tailor each element of the final item. That is not to say that Earthrise favors custom-crafting of individual items only – majority of items will be rather simple to mass produce given components are available and will provide everyone with the means to join the conflict between Continoma or Noir, or carve their own name in the history of Enterra.