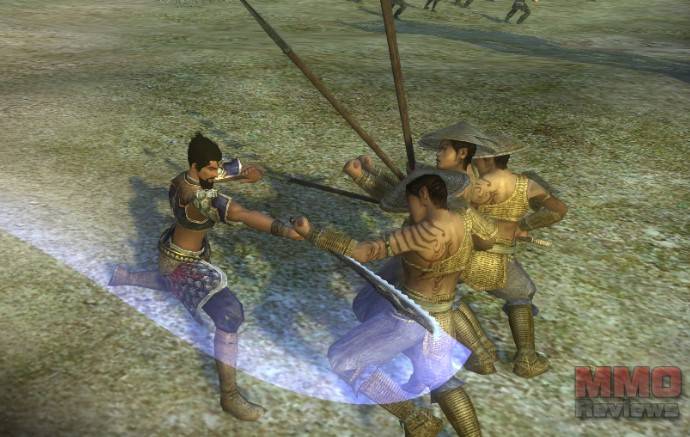 Developed by Techmo Koei for Windows.

Dynasty Warriors Online is an action free to play online 3D MMO game with tactical combat. It is set in the Three Kingdoms era of Ancient China and the beautiful graphics will transport players back into the heart of this dramatic and romantic period. This game artfully combines MMO elements with the fast paced, exciting combat players have grown love from other Dynasty Warriors titles. The action oriented gameplay is not all that common for MMORPGs and will be something that sets DWO apart from the rest.

It features instance based leveling which allows players to change their strategies mid-fight by leveling up various attributes; numerous battle modes to allow players to fight one another, hone their skills in solo modes, even capture enemy towns; and for the first time, up to 24 players can participate in Show Downs.

In addition to these, Dynasty Warriors Online is the first title to feature character creation that allows the player to become the hero of the story. As players grow and become more powerful warriors, they continue to become more individual as the game offers a variety of customization options for both armor and weapons. To take their power to even higher levels, players can take advantage of an easy to use item enhancement system. Every warrior should have a place to call home; Dynasty Warriors Online provides player houses and furinture to decorate the place to all their social needs. Finally, Dynasty Warriors Online has a guild system to let players create newer and greater strategies for large-scale wars.

While all battles are generally instanced and faction-based, PvP is separated into different battle modes: Melee, Campaign, Arena, Showdown and Mock Battles. Each battle mode is differentiated according to its scale and the conditions at stake. Battles can accommodate as much as 24 players in a 12-versus-12 showdown of epic proportions. Factions have the whole of China, divided into cities, to dominate and takeover. The number of areas taken over has different effects on your faction, such as advances in weaponry and relatively lowered prices.

Melee
4v4 brawls that effect the ‘Melee’ score of each participant based on results. Melee matches earn Conflict points towards the winning team’s faction.

Showdown
The largest scale PvP battles. Two teams of up to 12 players fight it out to earn Conflict Points for their faction.

Campaign
Only open to players of rank Lt. Major or higher. One team must defend their faction’s control over a city while the opposing force must conquer it.

Mock Battle
Fight with players from your own faction in battles of up to 4v4.

Arena
Fight against players or rival factions without worrying about individual rankings.