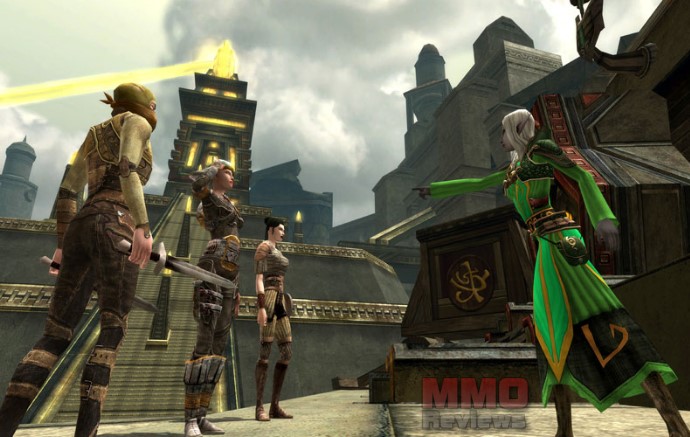 Dungeons & Dragons Online®: Eberron Unlimited™ (or DDO for short) is now a free mmorpg. Set in the vast and dangerous online world of Eberron, gamers discover hidden treasure, pummel monsters, and look to evade traps left behind by an ancient race. By leveraging the most active, most realistic combat system of any online game, DDO players deliver and feel every blow that goes into a baddie’s demise.

The DDO store is a vendor within DDO, where you can spend your hard-fought points or real, hard-earned dollars (if you wish) to enhance your gaming experience. While the best gear can still only be found by adventuring in-game, the store offers a bevy of convenience items, in addition to premium content modules, extra character slots, hirelings, potions, unique character customization, and much more than this page will allow us to list! Items in the DDO store are purchased with Turbine Points.

Dungeons & Dragons Online offers a unique and refreshing take when it comes to battle. Known as the Active Combat system, fighting in DDO is unlike anything you’ve ever seen in an MMO. DDO gives you the ability to feel the action at your fingertips as your skill is truly tested! Monsters can see and hear you, adding entirely new elements to an already advanced system -- for no longer is combat relegated to simply pressing your number keys.

Take part in strategic, tactical battles using a combination of collision mechanics and real-time combat.  Take on the mantle of a well-armored fighter and protect your weaker companions by blocking incoming arrows or obstructing enemies in a narrow hallway.

- Warforged; Warforged are sturdy creatures of living wood and metal and are immune to many dangers that plague the other races.

- Drow; Drow elves are similar to other elves but on average have greater intelligence and charisma.

- Dwarf; Dwarves are very tough and hardy, naturally resistant to many forms of magic, and stable on their feet.

- Halfling; Halflings are very agile, but are small and not as strong as the other races.

- Elf Elves; are very dexterous, have keen senses and a resistance to enhancements, but are less hardy than the other races.

- Human; Fighter: A warrior with extra feats, allowing him to specialize in melee.

- Paladin: A warrior that trades some of his melee power for the ability to cast divine spells.

- Barbarian: A warrior that has special powers when angry and specializes in damage dealing.

- Ranger: An archer and a dual-wielding melee (in exchange for removing animal companions, DDO gives all rangers both combat styles).

- Monk: A combatant usually fighting without weapons, without shield and without armor, that performs amazing techniques in battle by using a power source called Ki.

- Favored Soul: A divine caster that follows the path of the Cleric but is able to throw spells with surprising ease.

- Rogue: Has the most skills in the game. He can find and disarm traps. Rogues can also open locks and find hidden doors.

- Bard: Has a lot of skills and is a weak arcane spell caster.

- Wizard is an adaptive caster.

- Sorcerer is a focused caster.

- Cleric: a strong divine spell caster that uses all armor without penalties. Versatility is the greatest strength of humans, and they can do well in any of the classes.