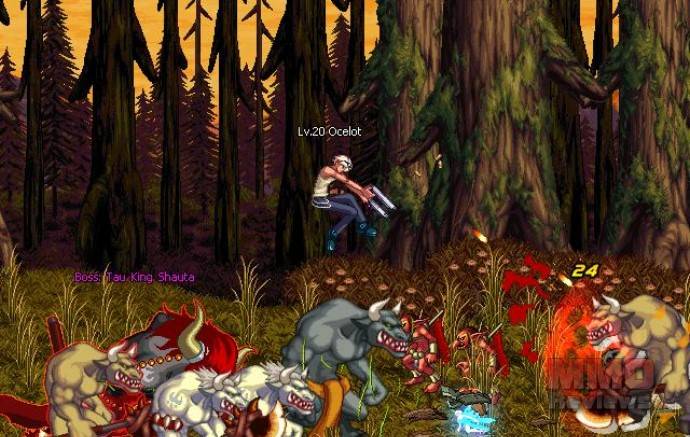 Developed by Neople for Windows.

Dungeon Fighter Online, DFO for short, is a 2D, side-scrolling action MMORPG. It is similar to classic 2D side-scrolling arcade hack and slash games, where players will traverse 2D screens while fighting hoards of enemy monsters. There are two types of game play in Dungeon Fighter Online. You can either enter the many dungeons —alone or with friends in a party— killing monsters and vanquishing evil. OR you can go into the Arena and fight your fellow Dungeon Fighters in player-versus-player combat.

The mystical continent of Arad is a beautiful and varied landscape, with lush green forests, vast snowy planes, beautiful towns with dusty cobblestone streets, magical fortresses atop the back of flying whales, a gravity-defying Sky Tower that stretches into the deep blue of Middle Ocean, which itself defies gravity as it floats above the sky, separating Arad from the land of Empyrean… Arad was once a rich and vibrant land that enjoyed peace and prosperity until it was overrun by a mysterious darkness known as the Devolution. It’s up to you to save Arad from a grim fate. Guiding you along your way is a colorful cast of NPCs, who send you on critical quests, help enhance your equipment and skills, aid you in manufacturing items you will need in your myriad adventures, and fill in important pieces in the larger narrative tapestry of Arad and its struggle to resist the dark and insidious advancement of the Devolution. Much rests upon your shoulders, but with great responsibility comes great reward.

Slayer
The Slayer derives his power from the demon Kazan, who dwells within his arm, locking this warrior in a perpetual struggle to keep from being possessed completely. Only the thick, mystical chains shackled to him keep the dark parasite at bay. As a consequence, a Slayer can only wield a weapon in one hand, a disability he has fashioned into a distinct advantage, doing with one arm what most other swordsmen would need two to do. He primarily attacks his enemies with swords and blunt weapons, but can also, when in a dungeon high in demonic energy, call upon the dark power within him to cast magic spells. This dark power also gives the Slayer a particularly high resistance to Shadow energy, but unusually low resistance to Light energy.

Fighter
What she lacks in magical might she more than makes up for in physical strength and agility. A Fighter likes to charge right into close-range combat, fists flailing, fury fired up. She usually sports gauntlets, knuckles, claws or even boxing gloves. And as she gains experience knocking out monsters, the more expansive her repertoire of fighting moves becomes: the back-breaking Suplex, the earth-shaking Seismic Punch, even the swift and subtle Low Kick, which allows her to deliver quick, powerful jabs to her enemies' legs, disrupting their movement.

Gunner
Tall, lithe and sneaky, the Gunner is a mysterious being from another plane where they have mastered technology to compensate for their world's absence of magic. Generally weak physically, he attacks at a distance with a brutal arsenal of weapons. The Gunner has even been able to channel the magic of Arad to enchant bullets with elemental powers, which unleash gruesome damage on creatures vulnerable to particular elements.

Mage
The Mage comes to Arad from the dying magical world of Pandemonium, hoping to find a way to revive her land. However, she finds that in order to do that, she must first save Arad itself. With the appearance of a petite, young girl, the Mage is the smallest class in terms of physical stature. But she wields considerable magical power, casting spells that attack, confound and destroy the enemy.

Priest
A Priest is a powerful warrior who has dedicated his life to holy pursuits, namely the eradication of evil. He is driven by a single mission: to prevent the resurrection of the demon Ozma and his devilish minions. To aid him in this pious pursuit, the Priest carries large, terrifying weapons, such as giant wooden crosses or daunting totem poles, with which he bashes open the skulls of all creatures that dare cross him. Blessed by holy power, a Priest also has limited magical ability, used for healing or enhancing himself for battle.

In the land of Arad, brave dungeon fighters from every class who have reached Level 10 go to the Arena for the honor of being the best Dungeon Fighter in Arad. Dive into the exciting, fast-paced, hair-raising, intense experience of going head-to-head with your fellow players. Also, earn rewards and rankings that will surely tell of your combat glory for ages to come. Players are rewarded accordingly based on their Arena performance, receiving Victory Points and PvP Experience Points from an Arena match.

PvP Experience Points
These points are applied toward your next Arena rank, and are separate from your dungeon experience. On the rewards screen, the PvP experience bar will indicate your progress toward the next Arena rank.

The Fatigue Meter Is the thin blue bar that rests atop the game menu icons in the center of your HUD. Each character starts with 156 Fatigue Points and will lose one (1) for every dungeon room entered. Which means that if you move through six rooms in the process of clearing a dungeon, you will expend six (6) fatigue points. When your fatigue meter reaches zero (0), you will no longer be able to enter a dungeon until 6am the following day (when your fatigue meter resets.)

Goblin Pad is an interactive security feature used to protect Your account from hackers and malicious third-party applications. Though you are not required to use the Goblin Pad feature, it is highly recommended that you do so. A Goblin Pad PIN is associated with an account, not individual characters. So you would use the same Goblin Pad PIN for all of the characters created under the same account.