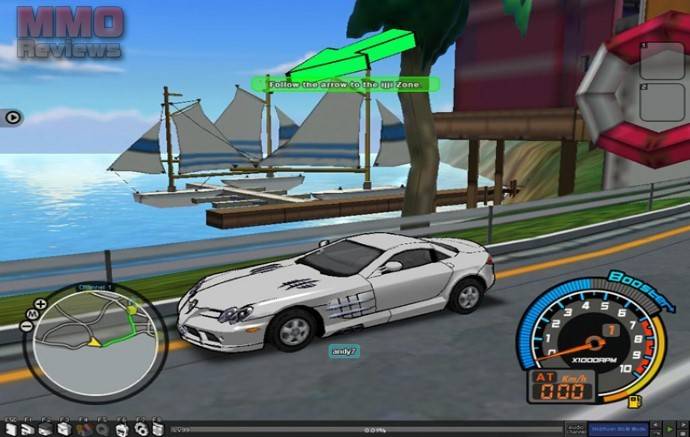 Developed by NPluto for Windows.

In the near future, the world’s industrial infrastructure has been severely hampered due to shortages of oil. All eyes are on the remote island in the Pacific, where an amazing new natural resource has been discovered: Mittron.

On Mittron Island, the use of Mittron now powers all modes of transportation. The performance of automobiles in particular has shown the potential of the new fuel. The OMD government, the governing body of Mittron Island is eager to form agreements with the rest of the world in sharing the Mittron technology.

However, mysterious cars called HUVs have appeared and have been terrorizing the streets of Mittron and in turn disrupting the society. Professional drivers from around the world have been called in by the OMD to carry out missions. Whether you are chasing down HUVs, making deliveries, or smoking other drivers in the Battle Zone, your skills as a driver will determine your success on Mittron Island.

Players earn experience points and the in-game currency of Mito for completing missions and deliveries, as well as for bounties when hunting HUVs.

Players can choose from a variety of vehicles in different classes. They can also purchase upgrade parts for their vehicle for increased performance, though many parts require the player to have reached a certain level before they can be equipped. Performance parts can be further enhanced by Mittron Enhancers for increased stats.

Players can also earn "coupons" to unlock cars for purchase by completing certain in-game requirements. The player can also earn items through driving and hunting HUVs. These items can range from fuel for the car to car parts.

Players also have the option to join and form "crews," as well as form impromptu "parties" for extra experience.

Mittron Island consists of four cities: Moon Palace, Koinonia, Cras, and Oros. Players start in Moon Palace and work their way into Koinonia, Cras, and then Oros by completing storyline missions and reaching certain levels. Once these cities are opened, players can travel between them at any time using the highway system.

While most of the cars are fictionally branded yet modeled on their real-life counterparts, a number of vehicles from Chrysler and Jeep have been licensed for the game.