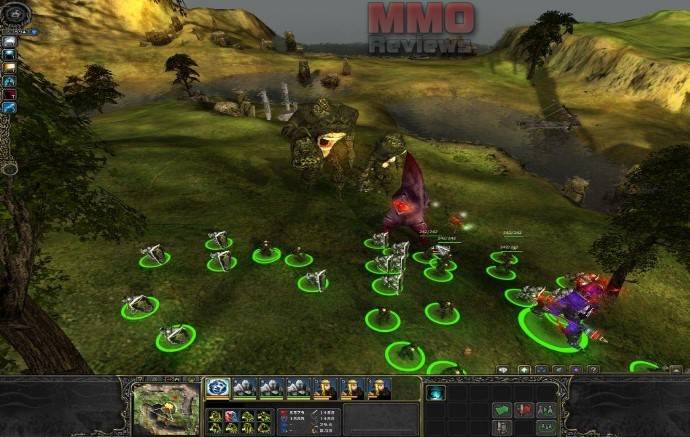 Developed by Lockpick Entertainment for Windows.

Dreamlords is a massively multiplayer real-time strategy (MMORTS) game set in a persistent universe, developed by Lockpick Entertainment. Dreamlords is online only, and is free to play with the option to upgrade to pay to play for additional benefit. It also includes in-game currency called Tribute that is used to buy items and spells to aid the players units.

The game uses of both a browser game and a downloadable real-time strategy client. Dreamlords also includes elements of role-playing games.

n the web-based game, players are given a section of land under their control. Tasks such as founding cities, researching technologies, building structures, and engaging in trade are accomplished through the web interface.

With a downloaded client, the Dreamlords client functions similar to a real-time strategy game. The client is used primarily to fight battles and do quests.

- Covenant; The first true habitants of Elysion, who in ancient times were forced to take arms and organize their first military defense upon Thûl's bloodthirsty invasion of their world. This past have forced them to establish a powerful and rigid doctrine which their army and entire way of life is resting on, and they will not allow anyone to question their beliefs. Through faith, organization and pride, the Covenants excel in their supreme defense and determination on the battlefield.

- Nihilim; The Nihilim was formed in the underworld of the Covenant society by a group of people who believed that the doctrine wasn't the right and only way to solve the problem of the nearly unstoppable Thûl. Logical and calculating, skilled in the use of magic and with the aid of an old and wise character named Ghûnan, they diverged to cast a stasis spell on the Thûl using the very force – the Gnosis – of the world, but failed to control the massive forces unleashed, ripping the world into what it is today. The Nihilim have since then learned much from their mistakes and mastered the more subtle powers of magic, and stand out as masters of ranged battle spells.

- Thûl; Originating from mount Thûle, where their forefathers once drank the waters tainted with the Nedom Wolven's blood, turning them into beasts more than men. Though they by that time lived to spread the word of Nedom through bloodshed and fear, their ultimate saviour and Cynos, they have since then calmed themselves in their beliefs and bloodlust. While no longer bound to blindly and zealously follow Nedom, they still hold to many of their shamanistic rituals and customs and is the one race who excels in swift and brutal melee combat above all others.

Dreamlords The Reawakening uses an Era system, which means that the game world runs for aproximately 2 months and is then reset. Your Patria along with buildings, followers and resources vanish and everyone starts again anew with the dawn of a new Era. But – by the hand of Cael, the Cynos of Time, your Dreamlord, Dreamlord gear and traits remain untouched by the reversal of time.