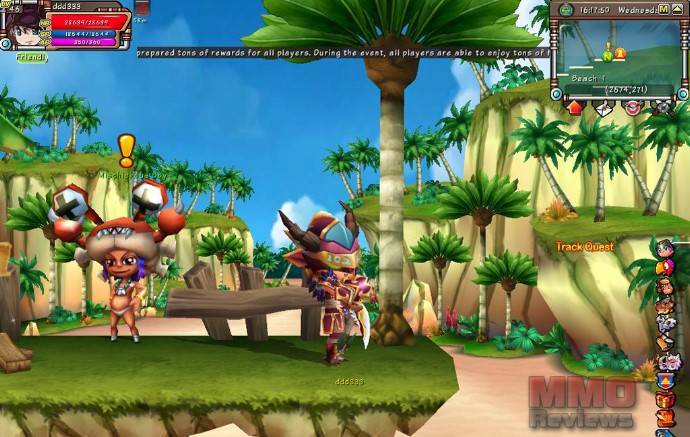 Dreamland Online is 3D anime scrolling MMORPG, free to play. It includes a variety of unique and cute elements that make players to take a trip into a world of fantasies spun variously from the darkest recesses of the mind to the wildest flights of fancy.

"There are many words that come to mind when thinking of a true Dreamland. Utopia, dreamscape, wonderland, these are just a few. However, though there may be many different ways to say it, they all mean the same thing – a world where everything is perfect, beautiful, and dreamlike. In this world, humans and animals alike were created in the very image of the goddess herself, and blessed with wisdom and charm. This world has always been the very embodiment of all things good and holy, which has kept the darkness and evil at bay.

Eon after eon, this world enjoyed what seemed like endless peace and tranquility, with the humans and the elves honoring a pact of mutual cooperation, working together to create a place they both could call home. Later, this time of peace would come to be known as the "Golden Ages" in the historical texts of the land.

With the progression of technology and knowledge, the elves and the humans began to venture out further, testing the boundaries they had agreed to and searching for the limits to their world. Also, though neither side would admit it, they both sought the legendary ruins said to house an artifact of legend – the Can' May. Legends passed down from generation to generation spoke of a great being which created the universe then departed the world. However, on the eve of departure, this great being left an enchanted artifact on a sacred stone, intended as a blessing for all the inhabitants of the land."

Different and Unique Themes
From a sunshine-filled mushroom town to a dark, creepy, misty forest, or an ancient, bat-ridden castle reeking of evil, Dreamland has it all. What makes up the wonderful world of Dreamland is the stuff of fairy tales and childhood stories, all presented in an animated style. Around each bend lies another scene that will help you leave your troubles behind as you recall the daydreams – or nightmares – of your youth.

Pets
Pets in Dreamland Online are quite unlike those found in most games. In addition to being able to catch just about any monster you encounter and turn it into a pet, you will have the ability to trade them, fuse them, raise them and customize them to become your ultimate pet! Since everything about Dreamland is so whimsical, just about ANY combination of pets is possible. The choices are entirely up to each player. After all, if you can have a piggy in I-Love-Mama boxers (below), there's virtually no limit to what an imaginative pet master can come up with.

Mounts
Mounts in Dreamland Online aren't the usual humdrum saddle-up-and-travel sort you may be used to. In fact, Dreamland mounts come in many shapes and sizes, whether they're animals, machines, or even skateboards! From dinosaurs, apes, or robots to rocket-powered pads, the perfect mount is waiting for you. Oh, and they're not just vanity items; mounts can actually enhance a character's capabilities through combination with their owners.

Quests
Dreamland Online offers a myriad of quests for players as they journey across this wondrous land. With different types of quests for different scenarios in the game, from class advancement to leveling quests, Dreamland has everything you want. Originality is the name of the game, whether in the form of dialogue, specialized tasks, or out-of-this-world fun. Just be sure your funny bone is ready to be tickled, because humor is never in short supply in Dreamland Online.

Skills
For a side-scrolling, Dreamland Online offers an amazing array of skills and effects, often accompanied by flashy, colorful, and powerful-looking visuals. From passive skills to active skills and auras, everything combines for a combat experience that's exciting and fun.

Character classes in game can be divided into 4 basic categories based on the skills they use and the player's preferred style of play. These 4 categories are Warrior, Mage, Archer and Rogue. These 4 categories can be developed into 8 classes which are Knight, Gladiator, Mage, Priest, Hunter, Ranger, Rogue, Bandit, and Assassin, after the second transfer.

Warrior
Primary attributes: Strength and Stamina. This class specializes in dealing physical damage and are constantly in the thick of battle. Players who don't mind getting up close and personal with their targets and then beating them senseless are a natural fit for this class.

Magician
Primary Attributes: Intellect and Agility. This class focuses on dealing large amounts of damage from a distance through the use of magic spells.

Rogues
Primary Attributes: Intellect, Stamina and Agility. Rogues are like Warriors in that they are primarily melee fighters, however, where the Warriors utilize brute strength, Rogues tend to use finesse to swiftly bring down an opponent.

All pets belong to one of the following elemental types (Natural, Humanoid, Flying, Metal, Poisonous, Elemental, Undead, Phantom and Dragonkin), and when fighting enemies of a particular element, using a pet of an opposing element is recommended to increase the odds of success in battle.

Pets have 4 stages of growth: Mature Pet (These pets are by far the most common monsters caught out in the field, and their attributes are more or less fixed. They are useful more for practical purposes than for anything else), Pet Egg (Acquired from the completion of various quests or from monster drops, these can later produce high quality pets if raised correctly), Mutated Pets (Better than any Mature Pet, there are 7 levels of Mutations, each more flashy, and stronger than the mutation before it) and Fusion (Level 30+ pets of differing genders, but of the same type, with 100 Closeness can undergo Fusion to produce an even stronger pet with enhanced combat abilities and cooler looks).

The PvP system is a simple way for players to test their skills in one on one combat, to simply settle an argument or to fight for glory. Whatever the reason, any time is a good time for some one on one action! Before engaging in combat however, players should learn the ins and outs of how to use the PvP system.

PvP Mode
PvP mode is fully customizable to suit any type of fight. Using different modes, you will be able to attack different types of players.

Dreamland Online features a full range of complementary systems, such as marriage, bug catching, fishing, or building a home. The developers have strived to create a world that players can relate to, even if they're surrounded by fantastic creatures and scenery. While the game has plenty of fighting, leveling up, or even grinding for devoted MMO fans, a host of other options await both casual and hardcore players.