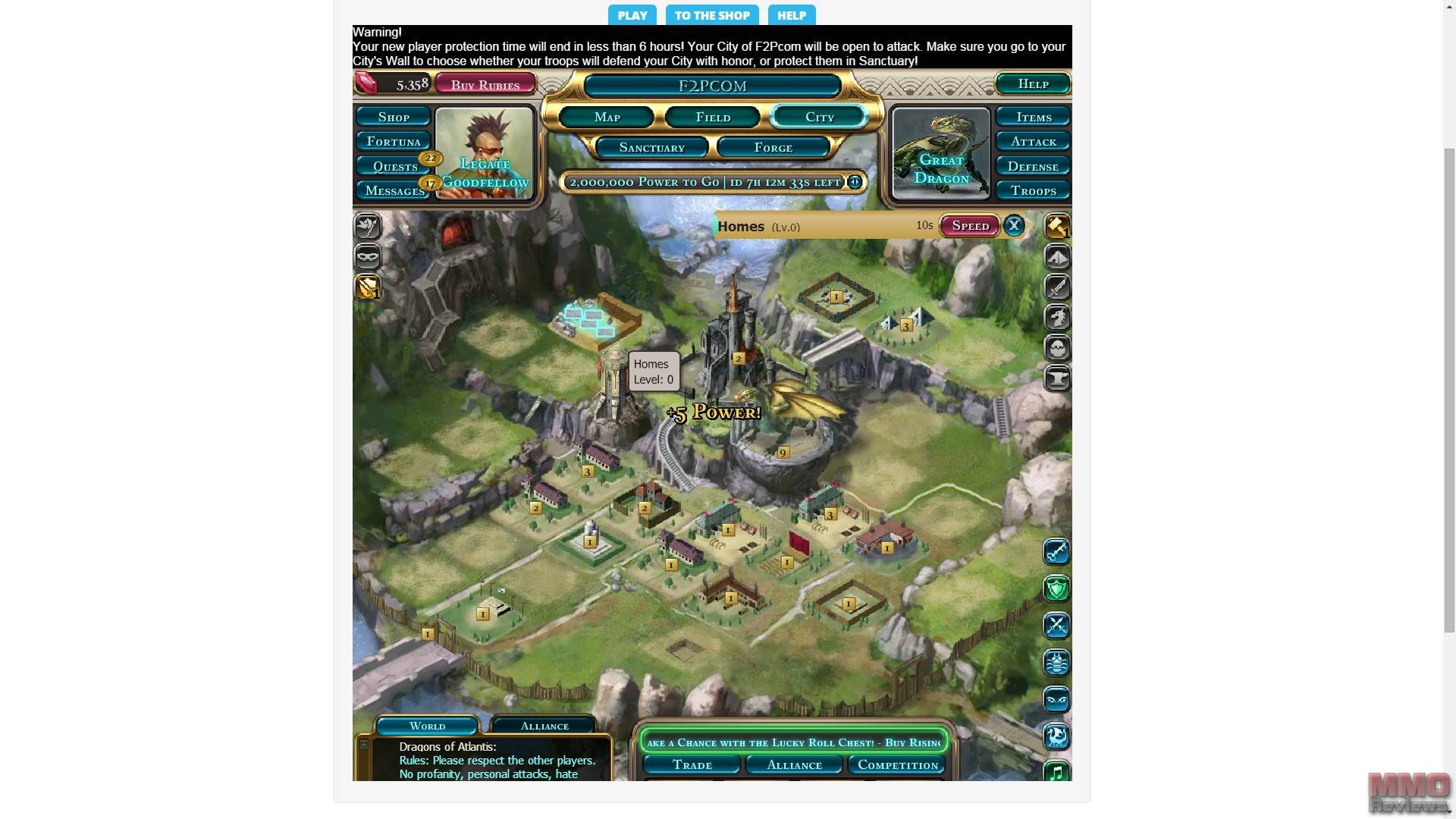 Dragons of Atlantis puts players in charge of their own Empire, starting with a new city they must train an awesome army, breed dangerous and powerful dragons and spread their influence and domination across the world. The game promoted competitive PVP rivalry between players as they can forge alliances with each other or declare war on each other’s territories. The game can be played through your preferred web browser and is completely free to play.

The primary motivation behind Dragons of Atlantis is for players to try and build up the biggest and most powerful Empire that they can, either on their own or by teaming up with other players to create or join formidable alliances. Competitive players can try to raise their rank position by making powerful Empires, earning various prizes at different tiers for doing so.

Dragons of Atlantis fundamental aspects revolve around time and resource management; players will have to gather up a variety of different resources to train troops, construct buildings, upgrade existing buildings, uncover technologies, and much more, so working with your limited stockpile and prioritizing gaining more is important. Likewise as every action in Dragons of Atlantis takes time, whether constructing a building or marching units across the map, it can take seconds, minutes and even hours or days for later game constructions.

Each players starts out with an initial settlement where they must erect buildings to cover all aspects of gameplay, from resource production with Mines, Farms, Quarries, etc., Garrisons to train units, Science Centres to learn new technologies, Walls for defenses and Homes to increase population. These settlements also begin with a Dragon in them, starting out as nothing more than an egg as players upgrade it, which takes a lot of time and a lot of resources, it grows through different stages to become more powerful and is the primary defender of the settlement in which its nest is built.

Players are able to get hold of various dragon egg types, Wraith Dragons, Water Dragons, Fire Dragons and more, each with its own unique look and abilities; but once an egg has been acquired the player can form a new outpost on some controlled territory to create a new settlement with this new Dragon egg at the heart of it. Secondary settlements don’t require all the same elements of the first city, players may wish to specialise an outpost to be for production, or focusing solely on building troops, as resources and units can be transferred between settlements as a players Empire expands.

A players’ army is built up of various type of troops, everything from Conscripts, Spies, Lonbowmen, Minotaurs, Giants and ultimately Dragons as well as numerous fantastic creatures and soldiers in between to join your ranks. Each unit has a variety of stats attached to it, from their Melee, Range, Speed, Health, Defense, Range and Upkeep, they also have unique values including Load which determines how many plundered resources they can carry and a Power rating determined by various buffs and gear.

When in a battle the game will automatically work out who the winner of a fight is based off both teams combined assembled forces; their choice of units and the number available, however players can be more cautious with their attacks and use Spies to try and determine the likelihood of an attack succeeded prior to declaring the action.

Acquiring new dragons is one of the most fun aspects of the game, either acquiring them whilst playing when taking new territories, or buying them with Rubies (the premium currency in game that can be bought with real cash). Alternatively players can also head over to the Sanctuary, their own private feature, and breed their own dragons (providing they have a male and a female!) to create new eggs.