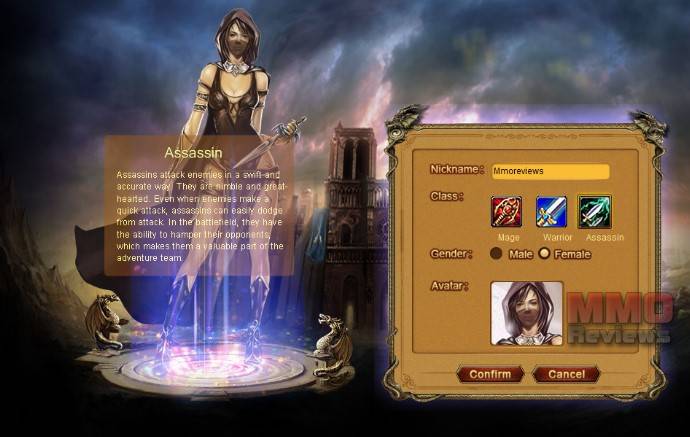 Dragon’s Call is a 2D browser-based, turn-based,fantasy MMORPG. Equip your character with a variety of weapons and use skills and magical abilities to travel through mysterious lands.

In the StillLand year of 656, Scott the Redneck, the ambitious young ruler of the chaotic orcs, backed up by the substantial properties inherited from his predecessors, plotted evil against the Phio Alliance for its vast territories, enormous wealth and powerful magic. He has even deployed forces in many places and started spy missions and tentative attacks against the alliance.

Meanwhile, the dark dragons took frequent actions against the humans. Evil and cruel, dark dragons are a mutated brood of dragons born after the ancient war between the dragons, known as Dragon's Cry. They have not only increased the number of their offspring, but also captured some slaves from the other races.

Apart from that, another force, more ancient and evil, is looming in the unseen corners. While in the human realm, although people seemingly lead a peaceful life, abnormal and strange things often take place here and there. The relentless undercurrents seem to foretell the storms drawing near.

Not long ago, the Kingdom of Disarn has just lost their wise king, who died of old age. The kingdom now is ruled by the prince regent, since the prince is yet too young.

The queen of the Kingdom of Stalla died of a strange disease on her travelling tour, and the beautiful queen newly married to the king, is seemingly in harmony but actually at variance with the princes and princesses.

The eldest prince of Glance, while on his study tour to the other kingdoms following the old tradition, oddly disappeared when travelling across Pandar Prairie from Disarn to Weirgburg. The king of Glance, shocked and furious, offered a generous reward for finding the prince. Disarn and Weirgburg, deeply embarrassed, are doing their utmost to offer their best assistance in the search.

Now, chance has come to you, a young adventurer growing up in Willshire situated in the countryside of Glance, who dreams of becoming a hero every day and night.

Assassin: Nimble Knight Errant
Assassins attack enemies in a swift and accurate way. They are nimble and great-hearted. Even when enemies make a quick attack, assassins can easily dodge from attack. In the battlefield, they have the ability to hamper their opponents, which makes them a valuable part of the adventure team.

Mage: Controller of Magic
Mages are adapted at using magic and focused on casting magic damage on their enemies. They are excellent at launching long range attacks. Mages are able to severely damage enemies before the enemies launch their attack. Covered by warriors, they can give a deadly blow to their opponents.

Warrior: King of Power
According to legend, warriors have extremely strong vitality. Equipped with a giant sword and heavy armor, they are capable of using various types of melee skills and have high defense abilities. Although they cannot deal the highest damage to their opponents, they will definitely inflict mighty damage. They more often than not, step forward to the front and absorb most damage dealt by their opponents.

There is a training field in the town, where you can train your character by setting the bot to target a certain amount of monsters. No item will drop here, and less experience you'll gain from killing monsters compared with using bot in the wild. However, you can target more monsters here, and you're totally safe and don't have to consume Dragon Coins.

When working in different places, you'll obtain corresponding reputation rewards, as well as certain amounts of EXP and gold. And when your reputation reaches a certain level, you can also get preferential treatment and unexpected surprises accordingly.

The arena administrator will give out credits and Honor Points to the top 9 arena fighters at 21:00 pm every day.

The auto-fighting system aims to provide you with a more casual and enjoyable gaming experience. When you are busy, you can leave the job of grinding monsters, a physically demanding toil, to the automation of auto-fighting, your faithful intelligent gaming assistant, exactly like the calculator you use in a mathematical exam. The auto-fighting is particularly helpful when you are tasked with killing a large number of monsters. Moreover, all the items and experience points you gained from auto-fighting will automatically go to your personal mailbox.