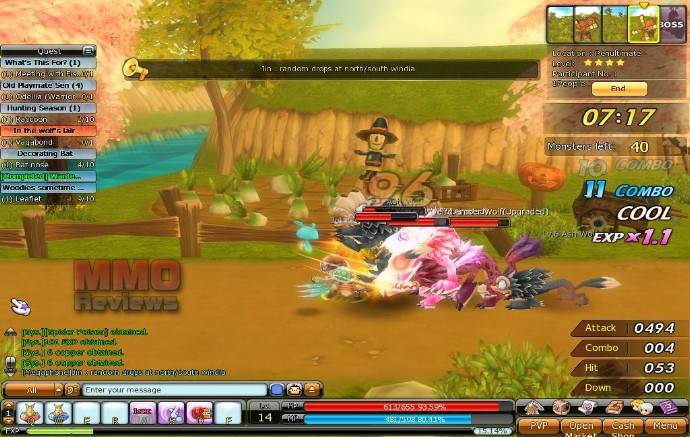 Developed by Barunson Interactive for Windows.

Dragonica is a 3D action side-scrolling MMORPG with an arcade style fighting with an unique combo system.

Since the close of the Dragon War, dragons and humans lived in peace on separate worlds - humans on their homeland, and dragons exiled to the depths of the Aether. It was not to last.

Consumed with the desire for revenge, the Dark Dragon Elga led a revolt that brought the death of the Dragon Lord and an invasion of the human world. One thousand years have passed since the Five Heroes of legend defeated Elga in battle, and imprisoned him in the labyrinth prison of the Shadow Cabinet. Now, an unlikely agent threatens to release the Dark Dragon, spreading evil's corruption across the land. And as before, heroes must rise to beat back the darkness.

They four basic classes are:

· Warrior; Warriors have spent years honing their strength and swordsmanship skills, turning them into exceptional fighters. Gifted with extraordinary offensive and defensive melee skills, they are the ideal vanguard of any battle group. As a Warrior progresses through Dragonica, they will be faced with the choice of becoming a skillful Knight or punishing Gladiator.

· Magician; Magicians grew up with an increased understanding of the world. After spending years in Magic Towers studying the laws and principles of magic, they emerge as trained sorcerers. Their powerful magical abilities more than compensate for their lack of strength. As Magicians progress, they have the choice of evolving into healing Monks or offensive Battlemages.

· Archer; Archers are the masters of the bow and arrow, one of the greatest weapons of all time. Their ranged attacks can prove deadly in long-range battles, but they can also hold their own at close quarters. As Archers progress, they have the choice to hone their skills with traditional weapons as a Pathfinder or to use explosive modern weapons as an Arbalist.

· Thief; Thieves are masters of stealth and shadow. They are close range fighters who use their agility and dodging abilities to attack their prey and retreat. Sneaky fighters, they are rumoured to have never fought a straight battle with their set of blades. As Thieves evolve, they have the choice to become an over-the-top Jester or an elusive Assassin.

Add a personal touch to your house by decorating it with picture frames, a house for your pet, personal notes and even a mailbox. Other functionalities include sending/receiving messages and the ability to store Items.

Dragonica offers a range of cute and adorable pets which can help you traverse through the sometimes dangerous world of Dragotaka. Bring them into battle for extra help and watch them evolve over time.