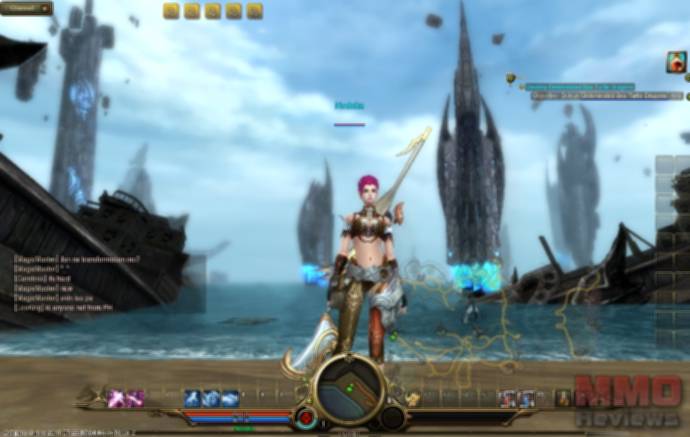 Dragona is a free to play  MMORPG where players can summon the power of ancient dragons to change their character's body and turn it into a dragon with great powers.

Magic Earth is a world where swords and sorcery, and dragons and monsters exist. According to the "Book of the Genesis," the world was created by the Goddess of Light, "Huanis" and her five Dragon Lords. They created many fine dragons to populate the lands. But one dragon named "Jurtan", born of the ashes of creation, mutated and brought forth the vices of darkness, jealousy, despair and death to the world. He acquired followers and became a great threat to the peace of Magic Earth.

To subdue the evil Jurtan, the five Dragon Lords banished him to the continent of "Bartan," known as "The Land of Death". With the evil dragon out of the way, the Goddess and Dragon Lords paid no further attention to him. Enraged, Jurtan escaped and declared war on his Dragon brothers. Thus began "The Dragon Wars" which lasted for 1000 days.

When enough time had passed for history to become legend, and legend to turn into myth, in the year 999 of the Vedic calendar, an omen appeared one day. A meteor shower appeared in the red sky and the Thebes River overflowed with dark waters. This was known as “The Seal of the Great Storm” and with it, the seal that bound Bartan was broken.

Humans
Humans have established an alliance with Dwarves to overcome their weaknesses, and have been involved in the latest Dwarven technology. They can’t cast magic by chanting a spell but they have made it into a bullet instead and came up with a way to shoot it so that they can reach a level equal to that of an Eldin’s magic.

Kali
Though the Kalis live in small tribes without a country, nobody dares underestimate them. They are powerful, each and every one of them. In fact, they are a clan that can be simply expressed in one word: powerful. The Kalis’ mere whirlwind of swords can split rocks and their skin, which is harder than cast iron, cannot be penetrated by knives.

Eldin
For instance, the Eldin Dragonas can summon the magical creature Yaksia. Such magical creatures which respond to the dragon heart help boost the mana of Eldin Magicians to allow them to cast magic with unusual destructive power compared to human magicians. Their magic power can even transform the terrains or climate.

Catcha
The descendants of the Catcha race learned to co-exist with other races after the Great War. With the outside influence from eldin and human they renounced their primitive ways and old spirits developing a new and advanced civilization. Quite vain by nature, their culture is yet unknown by some and their past ancestors still hope for their Catcha Kingdom. But their blood still flow with a powerful beast, infused with a dragon transformation they reign unstoppable at any enemies that blocks and hinders their way.

Gunner
Gunners wear a thick titanium plate armor and an ethereal blaster with which they can launch a wide range magical attacks using magic scrolls.

Snipers
The snipers who lay hidden prefer light armor which enables them to move swiftly in the battlefield. The long-ranged ethereal blaster turned snipers into the grim reapers of the battlefield, because this weapon can damage major enemy targets even when they are behind their own front lines.

Guardians
The Guardians wear a mithril scale armor embodying their ancestors. The enormous long swords wielded by Guardians are sacred tools guiding them to reach their star.

Rangers
Rangers are usually rational and cool-headed and do not get into unnecessary fights. Instead, they calmly analyze the strengths and weaknesses of their enemies and that of their friendly forces with a sharp perspective. By shooting a piercing arrow at the right time and place, they can turn the tide toward their own forces.

Magicians
Magicians can use all types of magic, from simple magic causing physical damage with a mana field, to powerful spells for summoning meteor showers.

Shamans
They are well known for its impermeable hand to hand fighting style, its physical attack contains the breath of Spirits that shatters opponent’s soul when hit. They prefer to rely on the power of their weapon rather than relying on physical strength alone.

Scouts
Rather than exerting effort in increasing their muscle density to strike directly, they used sharp metal shuriken to assassinate their opponent in a midrange position. With the ancestrally blood runs through their veins that hunting by means of stealth is still their way of eliminating an enemy.

It is the process of temporarily borrowing the power of the dragons to enable the use of their power. This will transform the character’s body either in part or full. Dragon Possession is broadly classified into Partial Possession and Full Possession.

Partial Possession
Partial possession transforms a certain part of the body and its appearance once an item is worn on either the head, upper body, lower body, or the arms.

Battle Arena
Battle arena is held at a designated time every day and is an instant siege battle anyone can participate in. Unlike PK, players can enjoy one-on-one matches without risk or loss, and since they can obtain rewards such as EXP, potion, and buff effect, it can be very helpful in playing Dragona.

PK
Players can attack an opponent’s character in places outside the safe area, such as outside of designated places like the Battle Arena. However, the following features were designed to limit damages from indiscriminate PK’s.

- Characters below Level 15 are restricted from the use of PK.
- All villages (or cities) are designated as safe areas.
- A PK penalty points system is in place.