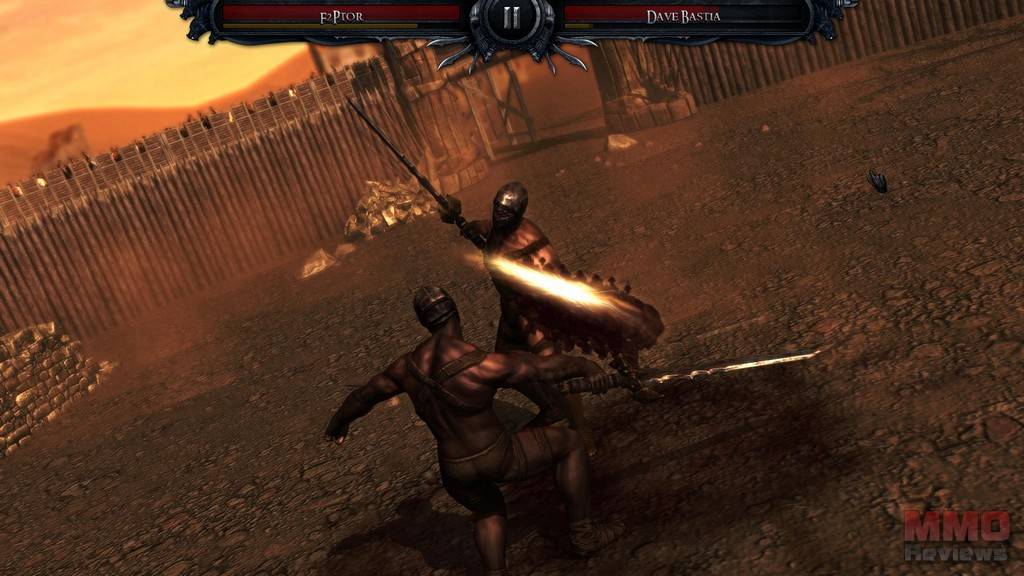 In Doom Warrior, players must fight for their lives in a battle arena. Taken as slaves, they are forced to fight for the entertainment of the wealthy and sadistic who gain pleasure from the bloodshed of others as they fight each other in gladiatorial style battlegrounds. This duelling MMORPG documents the players' rise to fame as they start out as lowly fledgling this combatants, fighting one-on-one against other misfortune souls, but with each victory they will taste the power, the glory and the one step closer to freedom.

At the heart of it, the game itself is not ram packed with features but its core gameplay is fun and competitive and focuses primarily on players working to improve their warrior through various means and climbing their way up the rank ladders by acquiring Battle Points for themselves or, if they choose to join one, their Clan. The simplistic controls and mechanics make the game easy to pick up and start playing that requires skill, commitment and persistence to master for those that wish to rise to the top.

Fights always take place between two different combatants, typically these will be two players but there is a feature that requires players to take down powerful AI NPC’s to unlock new arenas. Combat itself is a real time action battle where both players are working towards reducing other players hit points to zero by performing a number of basic attacks and powerful learned special abilities. Basic attacks are performed using the arrow keys on the keyboard, each button bound to a specific type of attack: slash attack (left or right), overhead power attack (down) and quick thrust (up), players can choose to perform these in a variety of combos but typically a thrust attack will strike quickly but weekly whereas an overhead attack is far slower, therefore sometimes easier to block, but was considerably more damage. Players are not simply at the mercy of whoever can hit the attack buttons the quickest, they are able to use their own reflexes combined with the WASD keys to block incoming attacks, each button blocking in a specific direction to counter one of the directional arrow key attacks. However, as fast as players reflexes may be the must still work towards increasing their Blocking stats so that their enemies attacks struggled to break through their defences. The combination of items and upgrades players can also learn special abilities, such as elemental attacks (fire, lightning, etc) as well as extra damage, bleed attacks, stuns and more, which are performed using the 1-3 keys and use up a lot more energy/stamina.

When a player defeats their opponent in battle, they earn themselves gold and Battle Points for that particular arena, a measured way to see how well the player is doing in comparison to other players and also at the end of the week the player with the most Battle Points for that particular arena and is extra bonuses. Players also have the ability to Execute their defeated opponents, stealing from them a percentage of their gold and making them lose more Battle Points, not only that but if the victim is part of a Clan then this penalty is also shared by the Clan itself.

A warriors’ gear can make or break their abilities in the arena, and are fundamentally what make up the bulk of their stats and abilities. Whilst each player’s base stats are derived from their level, where each level players can put five points into their basic stats (and levelling is completely unlimited), the bulk of their bonuses will come from their armour, weapons and items that they managed to craft, by or earn by defeating powerful AI Arena Champions and Bosses.