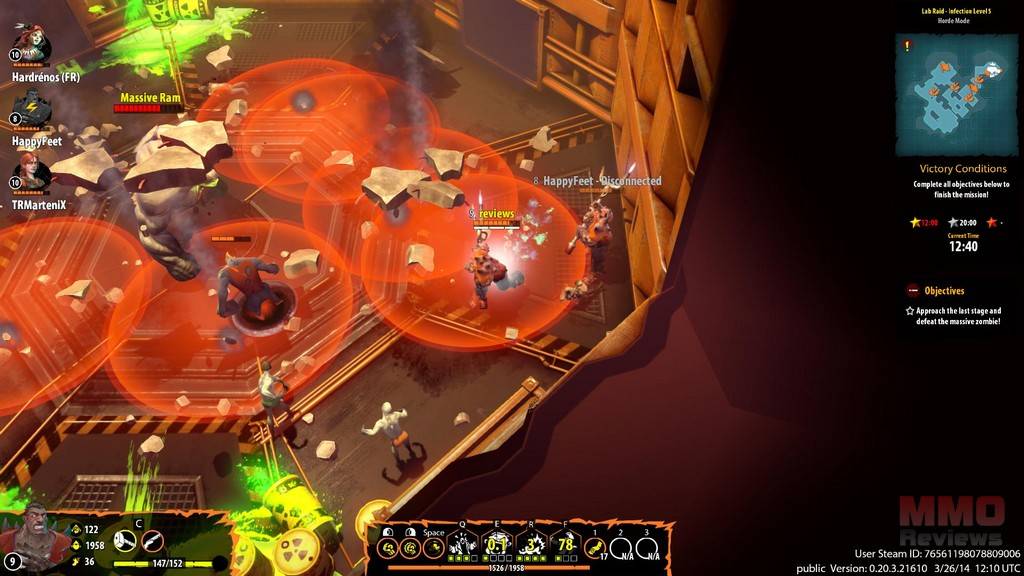 This fast-paced free to play MOBA type game set on what would have been a tropical island, right up to the point that its inhabitants were infected with a mysterious mutagen that turn them into mindless infected zombies “walkers”. You take on the role as one of the survivors, simply trying to work out what happened, how to escape and not get eaten in the process. In the game players are able to compete against each other in PVP work together cooperatively against the AI in different maps and game modes.

The unsuspecting arrivals on the island couldn’t even imagine what this tropical paradise was going to become almost overnight as an unknown mutagen has twisted the residents and guests of this once idyllic island into a living hell filled with zombies and unimaginable terrors. As one of the survivors you must battle your way through these flesh eating creatures, using whatever tools and components you can get your hands on to craft a makeshift weapons and fight for your life. However each of you has a secret weapon, the infection that has mutated everyone else appears to dwell within you as well, though instead of turning you into a mindless creature it has bolstered your abilities giving you a greater chance of survival.

There are four survivors available to play as in the game, each of them having three different variations to choose from: Survivor, Armoured and Mutated.

Berg: this Canadian lumberjack has traded in cutting down trees for cutting down the waves of zombies that now inhabit the island. The Canadian through and through his love for hockey can be seen in his armoured variation, equipped with a hockey stick and hockey padding he loves nothing more than to body slam into the enemy and throw them around as though on an ice rink. His mutant form has turned his tough skin into a thick armour turning him into the perfect tank.

Amber: prior to coming to the island Amber worked with all manner of dangerous and misunderstood wild animals, the perfect upbringing for the mindless creatures she now faces on the island. Her mutated form has taken on animal like properties from the poisonous venom she can fire from the barbs that cover her body to her chameleon like camouflage skin that can render her invisible. In her armoured form she comes equipped with various vials and gear to offer healing abilities to both herself and her allies.

Isys: the professional competitive gamer girl that ended up on the island after winning the competition she is fast and furious in combat, both in her video games and in battle; a natural engineer she is able to put together turrets in her armoured mode, but in her mutant variation we see the deadly combatant with her rapid twitch skills, sharpened claws and barbed tail.

Bryce: an adrenaline junkie that came this way chasing the monsoon season he is now traded in the waves of the ocean for the waves of zombies on the island, giving him an even bigger adrenaline kick. His armoured variation have him equipped with various makeshift weapons and armour and his mutant form has given him the ability to release clouds of poison that can fell even the biggest enemies.

Players can play into different games:

Horde: in this mode it is a team of four versus the AI enemies in a point capturing game where the team must work cooperatively to try and hold a point as wave after wave of enemy spawn at that location, growing more difficult with each wave. The team must work their way across the island until they reach the final boss area for a big stand-off.

Scavenger: the main PVP mode where three teams face off against each other on a single map trying to capture and hold different capture points, which will continue to exchange hands and the team will increase their score the longer they have a point under their control. As well as the opposing teams players must also fight against the enemy infected that are scattered across the entire map.

Players are able to craft a variety of different weapons that they can use out in the field from the schematics that they have looted in their travels. With no real weaponsmith available the survivors must cobble together whatever salvage and spare parts they can find to make some interesting it active weapons such as a bear trap attached to a glove for some impressive melee stopping power or a boxing glove attached to the end of a trombone.