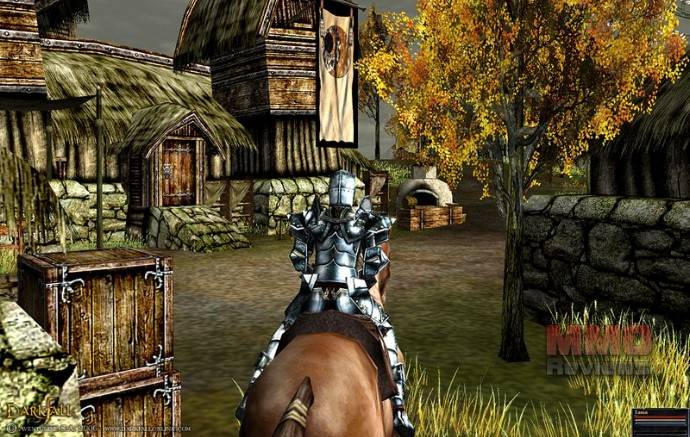 Developed by Aventurine SA for Windows.

Darkfall is a massively multiplayer online role-playing game (MMORPG) that combines real-time action and strategy in a fantasy setting. The game features unrestricted PvP, full looting, a huge, dynamic game world, and a player skill dependent combat system free of the class and level systems that typify most MMORPGs.

- Adventure and Explore; Enjoy the largest seamless, zoneless and un-instanced MMORPG world ever created. Explore five continents, countless small islands, trackless underwater depths, and a sprawling underworld. Hundreds of dungeons and adventure areas await. It takes many hours to simply travel from one end of the world to the other.

- play it your way; There are no safe zones, there’s PvP everywhere, and there’s also full looting. Anarchy is prevented by realm defenses and an alignment system which encourages aggression along racial lines. You have the freedom to follow the rules, or to break them and face the consequences.

- Invent Discover Create; In Darkfall crafters are extremely important. Every item is crafted by the players, even city buildings, mounts, ships and boats, cannons and vehicles.

- Fight Battles, build and Empire; Some of the largest MMOG battles of all time are happening in Darkfall every day. Darkfall is optimized for both player vs. player and for massive battles. Enjoy fighting epic battles featuring hundreds and even thousands of participants.

- Interact and shape the World; There can be more than 10 thousand concurrent users in every game world. Darkfall holds more players than any other game of its kind in each un-instanced, zoneless massive world.

- Rise to the challenge; Darkfall is THE PvP game. The best players, the top clans and the most epic battles ever seen in an MMORPG are all here. Darkfall will be the measure by which players and clans will be rated for years to come.

- Let your voice be heard; Darkfall is created by a small independent developer with a close relationship to the playerbase. There were no compromises made in creating Darkfall, and there were no publisher imposed changes.

Alfar of Nagast
Like poison darts, alfar night raiders strike deep into the lands of the foreigner. Appearing out of nowhere, they cut bloody swathes of death and destruction, before vanishing just as tracelessly as they came. To their victims, it seems like the night itself shapes the alfar, then dissolves them again when their butcher's work is done.

Dwarves of Dvergheim
Today, the dwarves are nearing the final page of the book of instructions, which is said to contain a special task that Ymir believed the dwarves would only be ready for after 20,000 years of preparation. Though they tend towards isolationism, the dwarves maintain cordial relations with the mirdain and friendly relations with the humans, who they respect for their industry, ambition and initiative. Together with their allies, the dwarves will fight off their enemies the orks, the mahirim and the alfar.

Humans of Mercia
The Mercians are natives of Riada, a sunken realm which lay in the great eastern sea, its spires gleaming each day with the rays of the morning sun. When this island home foundered, Mercian survivors landed on the shores of their present-day realm, which they conquered after a long war with an aboriginal people called the Imric. The Mercians see themselves as a divine race descended from the children of the sun god Auros, and they are at best unmindful, at worst disdainful of the needs and opinions of other, presumably lesser races.

Mahirim of the Tribelands
The mahirim are a fierce race of predators, whose society has only recently moved towards civilization. And while they may have cities and laws now, they retain the wolf-eyed wildness, the finely honed instincts, and the uncaring cruelty of their pack-hunting ancestors.

Mirdain of Mirendil
In combat, mirdain warriors move with innate grace and fluidity, seeking the perfect opening before striking with surgical precision. The mirdain are renowned tacticians, who may overcome near-insurmountable odds through brilliantly deployed maneuvers, ruses and stratagems.

Orks of Morak
To the orkish warrior's mind, excessive planning is a coward's resort, while fancy tactical chicanery is a sure sign of effeminacy. Instead, orks rely on a combination of unrelenting aggressiveness, death-defying bravery, and the natural-born bully's instinctive eye for weakness. Orks see most other races as little more than sources of income, sadistic fun and sacrificial victims. The only other race that the orks ally with are the mahirim, who they respect for their bravery, cunning and skill in battle. Together with their allies, the orks will fight off their enemies the humans, the mirdian and the alfar.

Darkfall departs from the conventional MMORPG paradigm of character levels as the main form of character progression, favouring instead a broad skill-based system, similar to that found in games such as RuneScape, Ultima online, EVE online and Asheron's Call. Skills and skill proficiency determine a wide range of a character's capability in the game, including weapons and weapon skills, a few special attacks, spells, and archery, all aspects of player crafting, as well as more basic facets of gameplay, such as the ability to swim, craft various items types, and to ride and control mounts.

Skills may be learned from NPC trainers in the game, however certain skills will require other skills as prerequisites. Without exception however, skills are improved (raised in power) through actual usage in game.

The ability to fully loot other players is a significant departure from other, contemporary MMORPGs, such as World of Warcraft and EverQuest II, in which the quest for better gear is the primary driving force for of player character improvement once maximum level has been attained. In Darkfall, character skills are the primary driver of character improvement, and gear also plays a large role in determining a player character's overall power. In some respects the looting system of Darkfall resembles that of EVE Online, which allows players to loot much of a destroyed ship's gear from the wreckage.

Friendly fire and collision detection are always in effect in Darkfall. Combined with a real-time combat system, Darkfall's combat is anticipated to provide a more realistic combat experience than other fantasy MMORPGs. The developers have opined that historically successful battle formations and tactics will be widely adopted and adapted for use in Darkfall. Likewise, area-effect spells and abilities affect enemies and allies equally, and so must be used with caution and discretion.