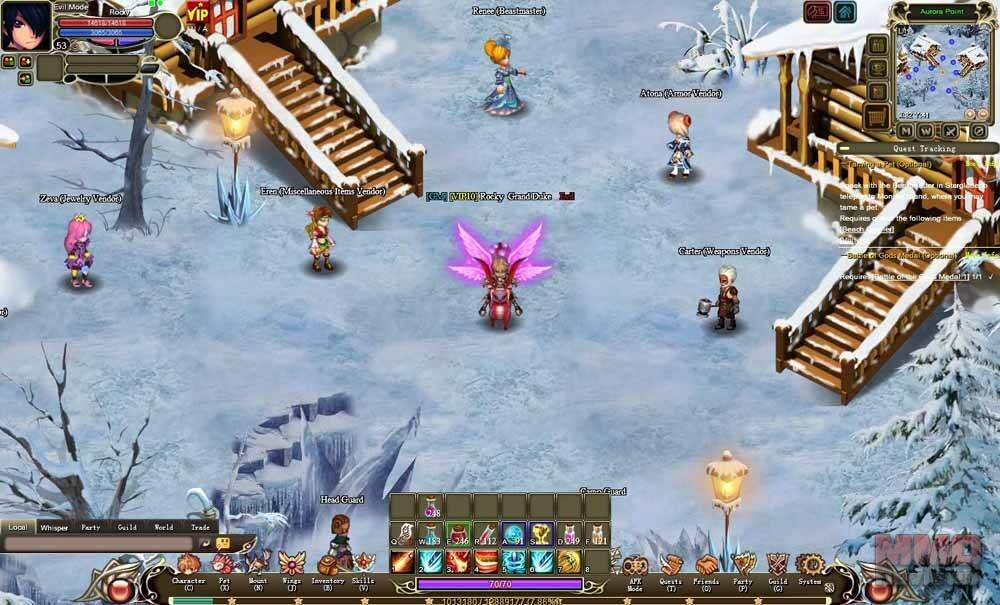 Explore the world of Vidalia in this free to play fantasy based MMORPG where you can take on one of five classes as a hero to the world adventuring on epic quests and unlocking the secrets of the world. Fight horrific monsters and gain XP to increase your levels and unlock new abilities and features as you progress, engage in World PvP against other players as either a defender of Justice or a harbinger of Evil.

In the beginning the Mother Goddess created the Crystal of Life which birthed all living beings on the planet Vidalia, the creatures of the world and their elven protectors who dwelled within natures’ forests. Soon after the humans came and grew to be the dominant force on Vidalia and, unlike the elves, sought the Crystal of Life on their own and brought conflict and death. With death came undeath and the armies of the Undead spurred on by the hate of the humans rose up and swept across the land leaving barren wastelands to the once lush world and turning their beasts into violent creatures of terror. Aware of what they had done the humans fled to the sanctuary of the forests under the protection of the elves.

The Undead feared the power of the crystal and surrounded the forests where it was held, but they held back. A ray of light that burst forth from the crystal that turned itself into a mirror, reflecting a dark void and absorbing the light that fell on its surface, as a violet light emerged and faded it had left in its place several hundred people. These people were the ancient descendants of the Father of the Universe, imbued with his power magic they could cast incredible spells, they were known as the Mages. Unleashing their power they began to drive back the Undead, but as the tide of battle began to turn in the humans favour, but then the skies turned black and winds howled as a the terrifying figure of the Undead War Chief appeared and commanded his armies into the forests.

As the Undead push on to claim their victory the Elves broke out in an immaculate chorus and began to chant, lifting themselves and the mages to the heavens with the power of the Crystal, lighting the forest, the world and the hearts of men. Using the Crystal of Life as their guide it emitted a brilliant light that enveloped all and with a deep crack spread the power of life to all. A resounding crack spread across the crystal, shattering it into five pieces, four of which flew off into different directions as the Undead War Chief and his minions were consumed with the final echo of “I shall have my vengeance!”

Crystal Saga plays like a classic Japanese single-player RPG but with the added bonus of being able to play with friends and meet new friends in game. Move across the world with an easy point and click and tackle beasts, monsters and players in PvE and PvP. In RPG fashion there are hundreds of quests available to pick up from NPCs, displayed through dialogue boxes similar to old school RPGs which advance an in depth storyline, however unlike its more dated predecessors Crystal Saga has exceptional graphics which still cling to their anime roots.

Unlock mounts, earn your wings and run your own Private Shop to sell off the items you have found or crafted to other players.

With five different classes Crystal Saga is already ahead of most free to play MMORPGs, combined with the fact that each class can specialize into two skill trees there are several different character builds available.

Knight
The Knight is the main tank, able to equip the heaviest of armour, it is your front line attack and defence, able to dish out melee damage as well as take it. Though they are skilled in melee they have a weakness against ranged and are unable to hit moving targets.

Rogue
The biggest weapon in the Rogue’s arsenal is their stealth ability, able to be in plain sight one moment and gone the next, they move in close and make devastating melee attacks from out of nowhere. Suffering again against ranged classes, the Rogue also has a much lower armour rating and so must be particularly careful.

Priest
Priests are the only healing class and so must take their parties wellbeing into consideration as well as their own, most spells centre around leeching health off enemies or revitalizing and buffing their allies. Priests are more than able to keep themselves alive when facing other threats, unfortunately their ability stay alive is dependent on mana to cast spells, which ultimately can be depleted.

Ranger
The classic ranged arch-type, the Ranger are the pinnacle of long ranged combat, keeping enemies at distance they are able to utilize skills and traps to keep their enemies away. As they are a ranged combatant they have a very low armour rating, and so can be taking down quite easily by a melee class in range, however, though not as powerful as a Priest they are able to heal themselves when needed.

Mage
The Mage wields devastating elemental magic, masters of area attacks they are at their best when facing off multiple enemies and are a very versatile class with plenty of tricks up their sleeve. As with some of the other classes Mages are vulnerable to melee combat, unfortunately they lack any healing capabilities and so keeping away from melee combatants is essential for the Mage.

There are three PvP settings that players can be in whilst they are walking around the game:

Peace Mode
In peace mode you are unable to attack other players, however they can attack you, if you are attacked then you must switch modes before you can retaliate. Peace mode is suitable for Evil characters who want to reduce their PK (Player Kill) Level.

Evil Mode
Switching to Evil Mode you are able to attack anyone over level 20 who isn’t currently AFK, players in Evil Mode can be identified by having a red “Evil” title next to their name, which grows darker the more players an Evil player kills and raises their PK Level. For every PK level an Evil character has they are attackable by players in Justice Mode for one hour.

Justice Mode
Characters in this mode are able to attack players in Evil Mode but does not allow players to attack those in Peace Mode.

Party Mode
This allows character to attack everyone except those in their party, enabling Party v Party combat or simply ensuring that there is no friendly fire when fighting other players.

Guild Mode
Similar to Party Mode, however this included all players in your guild.

AFK Mode
A unique element to Crystal Saga is the use of AFK Mode, here players are able to go AFK but leave their character logged in with a list of scripted commands, such as choosing which monsters you want it to attack, auto-looting mobs, using potions or even repairing and making purchases when not in combat. The length of time a player can be in AFK mode can be earned and during this time players are given AFK protection and cannot be attacked.

A VIP account is available to purchase, which gives extra coins and boosters and more AFK time per day that can be used to auto-grind when you don’t feel like killing fifty of the same mobs.