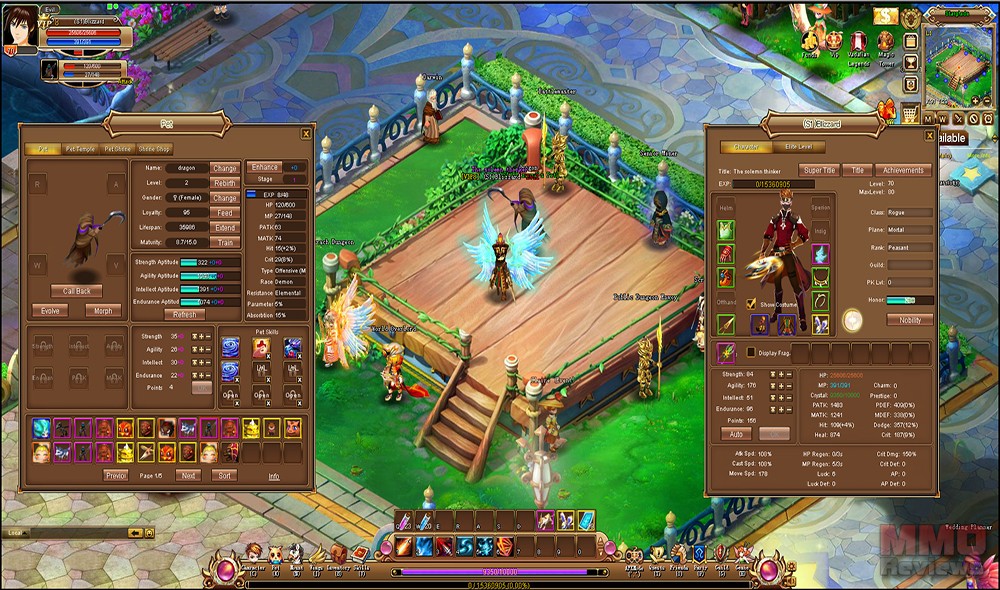 Free to play in Crystal Saga 2 players will become the champions of the realm as they fight back the ever growing forces of corruption and evil that threaten the world, guided by a long cast of characters in the game and aided by various spirits, pets and companions players will embark on a story-driven epic adventure. Crystal Saga 2 can be accessed directly through your preferred internet browser and players will not need any client download in order to play it.

This isometric top down RPG allows players to create and control a hero character and work towards gaining XP and levelling them up, in doing so players will gain access to all different types of PVP and PVE features allowing them to face more challenging content. The game features many classic Asian inspired mechanics such as a VIP-Recharge system to earn premium currency that allows them to shortcut many features by paying real world cash, AFK mode and traditional upgrading features for pets, mounts and acquiring wings all of which boost a character’s abilities.

Combat in the game is simple and does not require any action or twitch skill from the player, upon tab targeting an enemy the player can cycle through their skills bound to their hotkeys and manage their mana until the enemy (or the player) are dead. With some elements of the game requiring a high number of enemy kills, such as questing and certain PVE events, players can activate a personal AFK mode where they choose which types of enemies to fight and can set which health and mana potions they want to use and setting the % of mana and health their character needs to reach before they use it. Other elements such as setting which skills to use, which items to loot from kills, and more make it ideal for grinding quests (however the mode will not hand in quests and players do still need to participate in that area). AFK Mode requires consumable AFK Time, which is used up each time the mode is toggled on and stops being used when toggled off, AFK Time is earned through coupons or purchased directly with Crystals, the premium currency for the game.

There are numerous ways to make a character stronger, by acquiring XP and levelling up the character players earn attribute points each time they level up and a skill point every two levels. Attribute points will directly improve stats for HP, defenses, attacks, critical strikes and more, Skills augment class skills as well as unlocking new ones by spending points in one of the two unique class trees that customizes the class for the player.

Gear plays a vital role, with most gear granting some element of armor rating and attribute increases, players can collect gear of different rarities and qualities and equip them to their character, also collecting all the items in a particular set will grant additional benefits. There are various methods to improve gear such as enchanting it, attaching gems in sockets, and upgrading it in the forge.

Pets can also be earned to not only boost a character’s abilities but also help them in battle; a single Battle Pet augmented by six support pets can be collected, these pets can be individually levelled up, evolved and morphed and turned into more powerful companions.

There are lots of events in the game that are either triggered at certain times of the day such as the World Overlord Bosses, or features that players can attempt a certain number of times in a day such as various dungeons. Different events are unlocked as players level up, with the content growing increasingly more difficult and often relying on groups of players to overcome it, the more challenging the content then often the greater the rewards to the player.