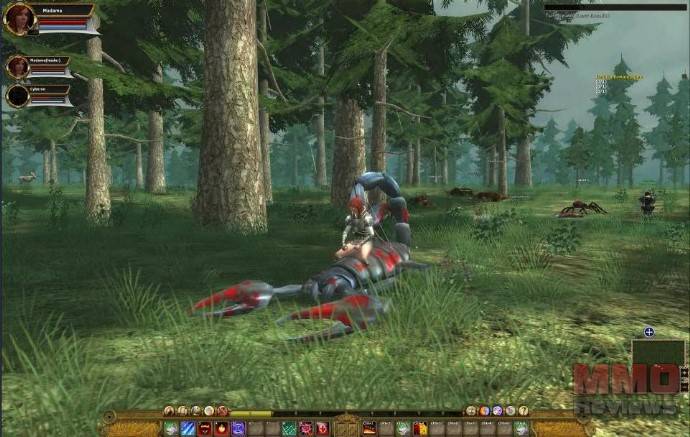 Developed by Cyberdemons for Windows.

“Craft of Gods” is a 3D MMORPG, based on Slavic mythology. The world characters live in is called Akvilon, it is a huge world with 25 different maps. There are many wonderful places to discover, many enemies to fight and an infinite number of things to do.

In Akvilon, there are forests, deserts, desolate steppes, magical ancient forests, frozen icy plains, where the cold can even freeze your very thoughts. There are hundreds of different monsters and more than 70 unique creatures, including the legendary Serpent, fiery Dragons, and the slimy Kikimora.

•This is the first MMORPG that unites on the same server people who love PvP and PvE: you can choose your race, and play it any way you like.
•This is a huge world with 25 different maps.
•You can ride any animal: are you tired of your horse? Not a problem – get yourself a bear!
•There are no classes, only skills: each player can choose from 14 schools of skills, every one of which contatns 15 powers – there are 210 different skills, and this time you are completely free to choose any set you like.
•You can become a Demigod: show your abilities in battle with your enemies, and gods will grant you a place at their right hand!
•There are 8 craft schools: “Craft of Gods” world is not only about battles.

There are six races in the “Craft of Gods” world. Two of those races, and some humans follow Svarog, and the other two races and the rest of humans - the Black Snake. The races hate each other and battle for the world domination. However, one of the six races is neutral - they are not interested in the battle between Avi and Navi.

Humans of Light
Svarog saw the danger that the Black Snake’s army represented, and so he created this race. He entrusted them with the world’s future. The human race is proud to be a part of Svarog's family, and they want to change the world in which they live. They have spread all over the world; they are very adaptable and can live in any conditions.

Hyperborean
When Siana, a golden-haired maiden with sea-green eyes decided to marry, she asked Svarog to find her a good man. He sent Iaromir, they fell in love, and were married. Their life together was happy, but then Siana died and Iaromir ran into her burning pyre to follow his love. He came out from the flames as god Semargl, and to them was born a new race: the hyperboreans. They are akin to humans, but they are made of fiery, and worship the Great Semargl.

Velet
This race has also been created by Svarog. He smote a mountain with his magical hammer, and from flying shards was created a giant human-like race, which Svarog named Velet. They are giants, powerful and strong, but they are also honest, a little naive and innocent. They are good and are kind to other creatures, but do not annoy a Velet, for he is as strong as Svarog himself.

Voldkodlaki
One day, a wolf went to the Black Snake. He kneeled next to the Serpents great tail, and asked to marry one nice human female of Darkness. At first, the Black Snake refused, but then he realized that uniting the mind of a human with the agility and strength of a wolf could create a new race, very well suited for serving his Dark purposes.

Dyagv
The Black Snake hates water, and he went everyday to the Great Lake to see the Spirits of the Lake. They were not afraid of him, united as they were in the clean waters of the lake. He hated them and so he created them bodies. This race becomes corporeal and they lost their powers in water and named themselves Dyagv. They are still serving Darkness, hoping that one day they will return to being spirits.

Atlantis
Few things are known about this race. They don't want to participate in the battle between gods’ followers, but they are also important to the world’s equilibrium.

ou can kill one of your enemies at any moment, but if you are too strong for your opponent, the gods will block your attacks, because only a fair fight is honorable.
There is also a PvP area, where you can gain a military rank by killing many enemies! And finally, if you will succeed in capturing one of the Tower items, you will be transformed into a Demigod!

On PvP map, each side (the Light and the Darkness) fight each other for the supremacy. However, Guilds are also very important. There are 12 towers on the PvP map, each guarded by “a boss”.
If a Guild wishes to conquer a tower, they must kill the boss, take his loot and the Sphere of Power, and place it in a special place inside the tower.

Then, the boss will come back to life, and be under Guild's control in defense of his tower. If a guild succeeds in conquering all the 12 towers, the Guild master gains the Demigod status.

Craft of Gods subscription will be 9,95 € per month.