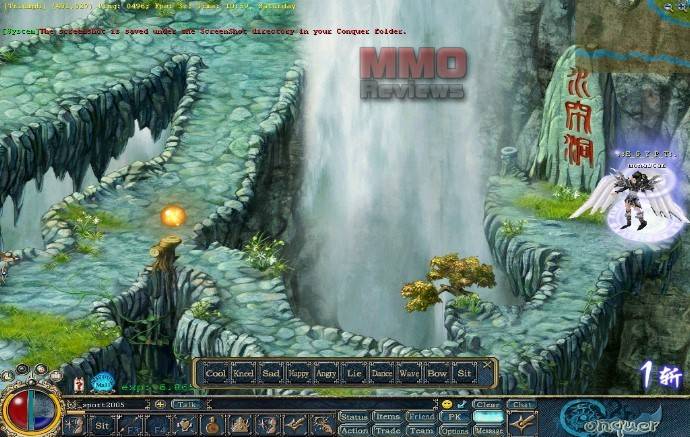 Conquer Online is a free to play 2.5 MMO set in the world of the ancient China with multiple versions in 10 different languages. . The game has a straightforward combat-focused play style, incorporating common elements of many MMORPGs such as wealth, fame and character development. Its combat is fast paced and fluid, offering a myriad of PvP options.

There are eight classes (Oriental assassin will be added soon), each one with a unique set of kills and powers. In addition, characters can also join various sub-classes and receive different bonus effects.

When there are no new skills left to learn, no regions left to conquer and no monsters left to challenge, it is time to be reborn. Rebirth is like reincarnation. Your character is born again as whatever class you like. However, memories of previous life linger, granting you additional powers, skills and abilities from your old class.

Players can kill as many other players as they like in Conquer. However, if they get caught by the guards they'll be imprisoned. There are regular player killing competitions and an arena in several cities.

Players can PK in the jail without PK Points increasing. Also they won’t lose EXP, or drop any equipped equipment and valuable items in the inventory.
Black name players will be put into this jail when they die. They have to pay Warden 500,000 silvers to get out of Jail.

The game system has been designed to encourage higher leveled players to assist beginners in starting out. The higher players are rewarded for this assistance by gaining a form of currency called ‘virtue points’ – or VPs – which can be exchanged for items from an NPC.

The amount of virtue points gained shows how many the player has according to the level of the beginner — a higher level gives more VP, since it takes more time to achieve the next level. While players may receive experience points by being power-leveled, they do not receive any skills or weapon proficiency.

This allows players to get a higher level player, called a Mentor, to help them with Battle Power, thus making the player stronger. When the Apprentice levels on their own, the Mentor can “claim” an additional portion of exp that the Apprentice gains during their activity online. This is another way of encouraging higher level players to help beginners, and for beginners to get a head start on their adventure.

The Dragon Chi, Phoenix Chi, Tiger Chi and Turtle Chi represent four kinds of locked elemental power. When players reach Level 110 of their 1st rebirth, they are able to unlock the Chi power.

After unlocking a Chi power, 4 attributes with a random type and effect will be attached to that Chi. Different Chi powers may have the same type of attribute, while one Chi power must have four different attributes. The attributes can be replaced with new ones by studying with Chi Points. There are 13 types of Chi attributes.

The game offers a complex mount system where you can breed new mounts. Each mount has attributes, including the Lineage Level, Lineage, Physical Attack, Magic Attack, HP, Speed, and Vigor.

Players also are able to fight on horseback.

Dragon Balls are magical items that players can buy, which give theor character an advantage in the game. Dragon Balls can be used to level up, become more skillful, enchant your equipment, and much more.

Dragon Balls can be bought with TQ Points.

Players who credit TQ Point Cards will be able to enjoy VIP Services. Through different levels, VIP players will enjoy different benefits, like –for example–:  Gain an extra 10% Blessing time when using a Praying Stone, Offline Training is extended to 17 hours, Gain an extra 30 chances to play the Lottery, everyday; Add a maximum of 80 friends, Buy VIP Hairstyles and Furniture, No restrictions on using Penitence Amulets; and many more.