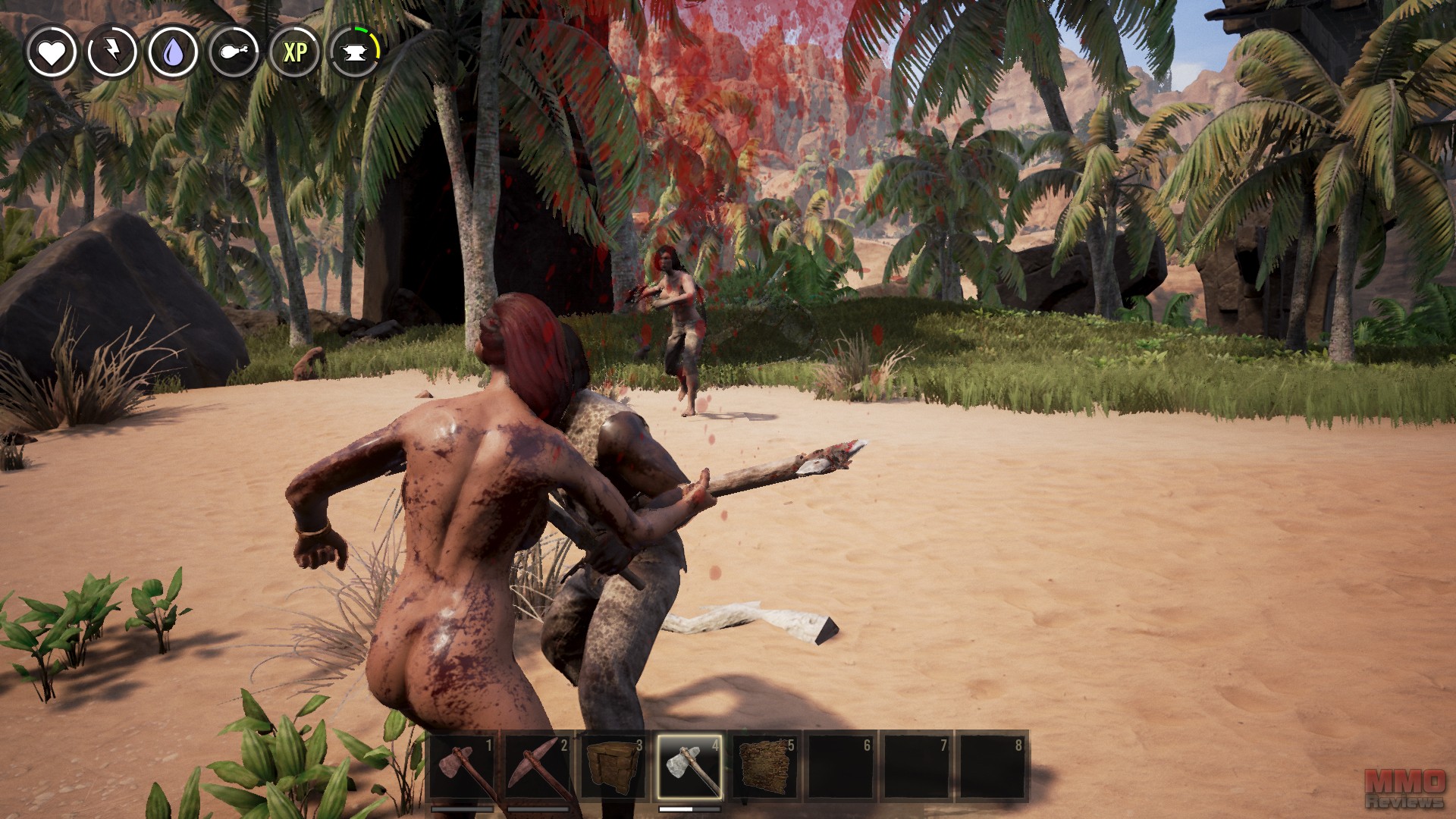 A survival game set in the world of Conan the Barbarian, players find themselves as exiles in the wastes and must learn how to live off the land, combating beasts, sandstorms and other players. The destructible elements of the game combined with crafting options give players a full sandbox environment to make their own as they carve out a life for themselves.

The game offers a traditional sandbox survival MMO based in the world of Conan the Barbarian, where criminals are tied up to crucifixes out in the desert wastes and left to die and their bodies stripped to the bones by creatures or the violent sandstorms. From the beginning players will find themselves with nothing, not even a loincloth depending on your choice of server (with full frontal character nudity available); they must gather resources, make primitive tools, make shelter, forage or kill for food, and simply learn to survive in the game, group up with other players if they wish and even battle against rival clans and player towns.

Players have a number of options with their characters, from male and female, various skin tones, hair styles and colours and a variety of sliders, different body shapes and more. Female character can choose the size of their breasts, which will feature extensively, and main can choose the size of their... "Endowment", from the laughable to the hugely overcompensating; full nudity is an option that is turned on or off depending on the server type and otherwise players are covered in cloth rags.

Many elements of the world can be harvested to provide resources for players, from picking up clumps of grass, rocks, fallen rocks and even insects to eat. These small resources will provide enough content to tide a player over and give them the building blocks to create larger things, tools such as pickaxes and handaxes that can be used as rudimentary weapons but also allow players to harvest rock outcrops and trees, both of which will be destroyed after enough resources are gathered. With new tools and more resources players must craft shelter, fire to cook food they have harvested from creatures, weapons, and other items needed to survive the land.

Survival depends on a few key elements; thirst, hunger and health. Players must constantly find sources of food and water, where there is an abundance of either players will find enemies and in combat will take wounds that they must manage. With a day and night cycle as well as sandstorms that can blind a character and injure them, making shelter a necessity. Living on the fringes can't last forever, isolated survivors roaming the deserts and green valleys alone will soon become the victim of some enemy or other.

Working with other players is the best way to survive, making your own clans and even larger settlements with working NPC guards that are forced into service, huge altars to give worship to a chosen deity, and even the possibility to summon colossal avatars that will smash the non-believer heretics of the world. The game is divided into various servers:

PVE Server - Players work together to overcome the various threats of the world, from the environment, roaming cannibals, to the dangers that lie within hidden catacombs and lost ancient sites

PVP Server - Players have the added complexity of other players who can also kill and loot each other, adding an extra element of danger in the world

PVP Blitz - As above but the game is sped up and resets after a certain amount of time, an exciting and faster paced game mode where players can try to attain victory over other players

The game supports official and unofficial/private servers, including online and LAN network games; admins of their own games can customize various aspects of the game from PVP options, XP acquisition, difficulty, nudity and more.