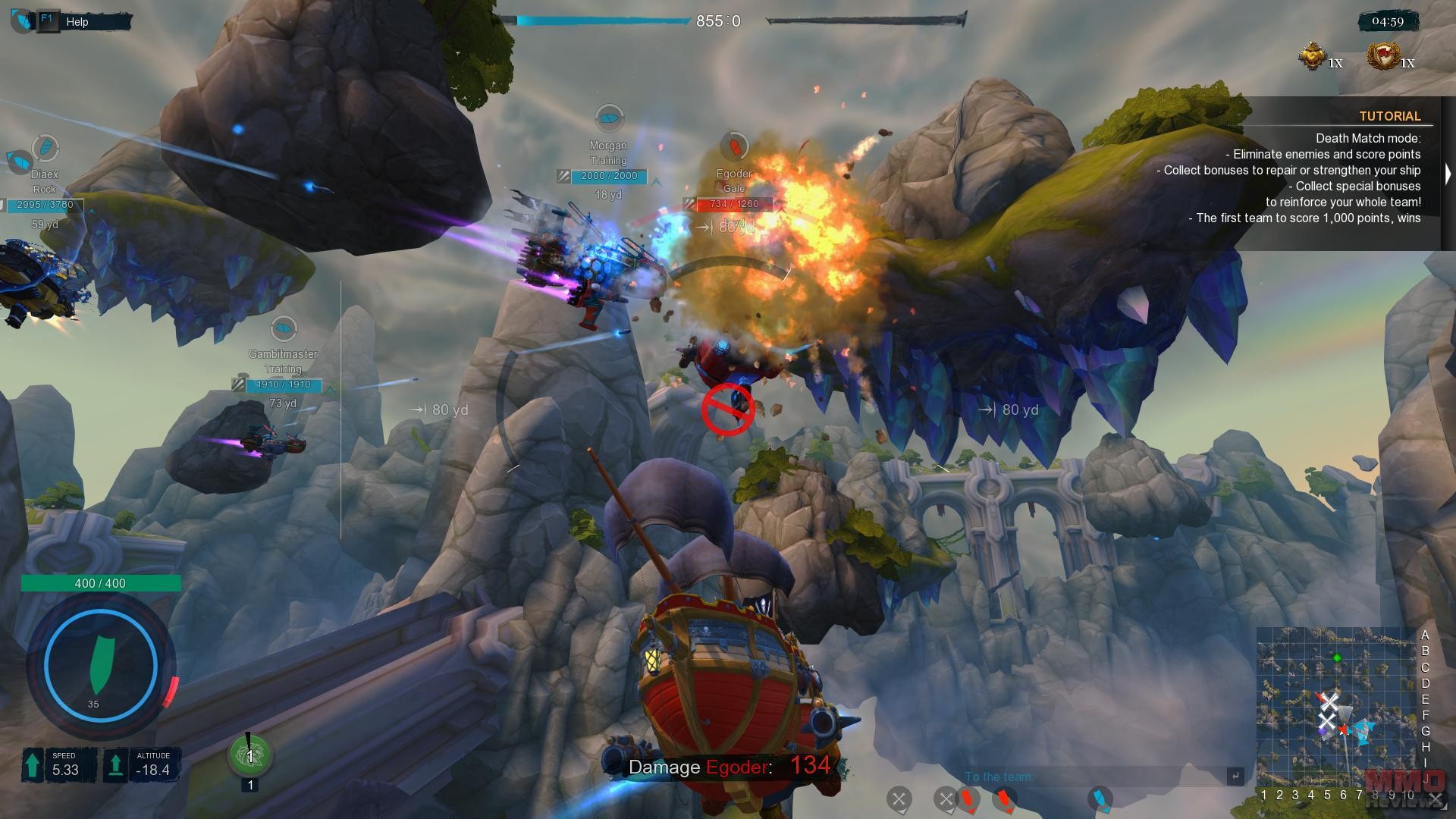 Fast, free to play and fun, Cloud Pirates is a team based PVP third person shooter where players fly around in pirate ships engaging in aerial combat trying to complete objectives in different game modes. With superb visuals, detailed and tactical maps, customizable ships and strategic game modes the MMO has a lot to offer.

Cloud Pirates is a team PVP MMO where players battle against each other (or optional AI opponents) in 10 vs 10 matches in different game modes that focus on classic objectives (Deathmatch, Point Capture, Escorts). The maps themselves are open skies littered with huge floating rocks and ruined structures from a world ending cataclysm that split the lands of Sarnaut into thousands of pieces, players now roam these shattered lands as pirates as part of a larger fleet. Through matches players earn Experience Points (XP) and Gold currency that can be used to access new ships and upgrade them.

Ships in the game are quite quick to move, so combat is quite intense and fast paced, using WASD to move and steer, shift and spacebar to descend and ascend, ships have full 360 z-axis movement and can fly around, over or beneath other ships and the rocky environment as they battle to try and position themselves for engagements. Ships primary weapons are the front facing cannons and side barrage cannons, by aiming using the mouse if the cursor is aiming within the firing arc of the front cannons then firing (left mouse button) will fire those weapons, aiming to your starboard or port side within the firing arc will in turn fire those respective cannons. After a few shots cannons can overheat and must cooldown, the result is that in combat players must constantly maneuver themselves to either be firing their forward or side cannons whilst also fighting for elevation to try and hunt down or evade opponents.

Ships all have shields that the enemy must damage enough to expose the hull where subsequent damage will deal hull hitpoint damage; a few moments out of combat and shields replenish, but hull damage is permanent unless healed by a support ship or if the player grabs a floating repair orb scattered around the map.

There are different classes spread across the dozens of ships in the game, from front line defenders, backline damage dealers to support ships, each ship type has its own stats, role and unique ability to help it in combat (such as speed boosts, heals or teleportation). New ships are acquired through the Development tree, players must earn ship experience in specific lower Tier ships by playing them in matches, until they have earned enough to unlock the higher Tier ship that it links to; from here the player can buy the ship and battle against other players in similarly Tiered ships.

Each ship has a unique Research tree where players spend their accrued XP to unlock new technologies and then purchase them with gold, these upgrades offer passive upgrades such as shorter cooldown timers on weapons, higher damage, more hull integrity, and other improvements depending on the ship and allow players to customize their ship to their preferred playstyle.

There are currently five modes in Cloud Pirates, with more to be added, which include: Deathmatch, Dreadnought, Escort, Treasure Hunt and Point Capture. These modes all revolve around trying to earn more points than the other team for the duration of the match, the mode determines the objective and how points are earned, such as Deathmatch being a pure battle against both team and each enemy kill scores points. Treasure Hunt has teams fighting over three differently coloured treasure chests that they must return to a specific location, fighting to protect their own carrying player and destroying enemy teams that have a chest before they can score.