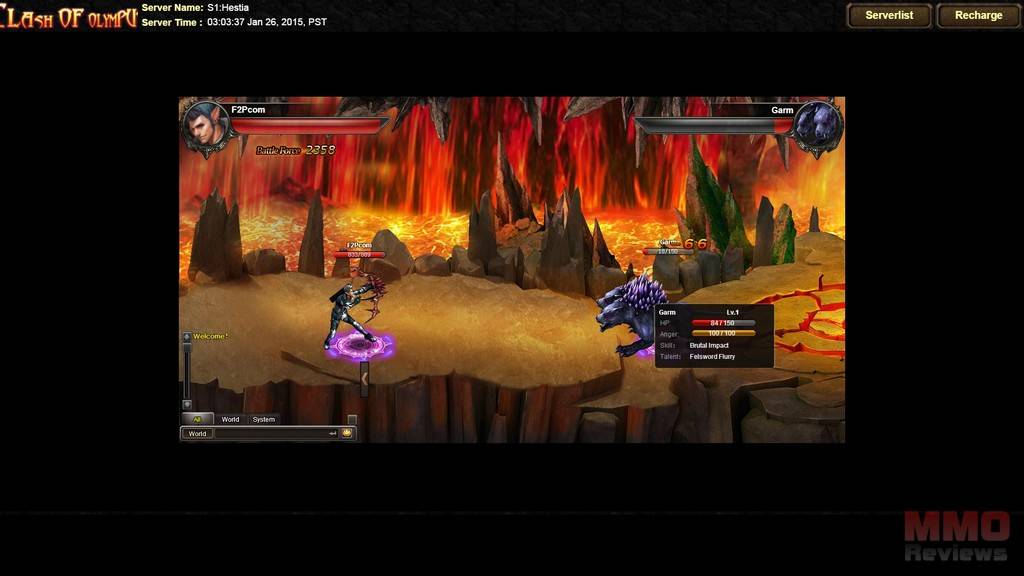 Clash of Olympus is a feature packed action RPG MMO with elements of strategic turn-based combat where players fight against AI challenges in quest-based missions. The game is set to an ancient Greek mythology theme where players as a hero of the mortal realm must seek out the gods themselves and call upon them for their aid when battling the dark emerging forces. Clash of Olympus is a browser-based MMO and players can enjoy the games free to play content, alternatively they can pay for recharges that give them a VIP access to unlock a number of features as well as giving a variety of free items to make gameplay easier

Called upon by the gods and guided by the Elders a hero rises in a time of turmoil and despair as the mortal world has come under the attack of an ancient force seeking to destroy it. Seeking the council and aid of the gods, including the mighty Zeus himself, this rising hero may come to be the saviour of the world.

The whole point of the game is for players to increase their strength, more commonly known in game as Battle Force, players will take on quests, defeat enemies and acquire powerful loot items and currency that they use to upgrade a variety of gear and God companions to further improve their Battle Force. As players grow more powerful they will be able to take on greater challenges and ultimately work towards engaging in PVP for endgame content where they will battle in duels against other players either in the Arena or as part of a Legion (Guild) in the Legion Wars.

Players have a choice of three characters, choosing between a male and a female, either the Archer, Mage or the Knight. Each character class has their own unique skills and abilities as well as key strengths and weaknesses such as the Mage is destructive offensive force being offset by their weak defences, in comparison to the Knight’s less powerful attacks but unparalleled defensive capability. The choice of character/class will primarily determine which Gods players will most likely wish to have in their Battle team.

No hero should go at it alone and by calling upon the Heroes themselves players are able to recruit up to 10 Heroes to accompany them on their journey, each having their own skills and attributes to bolster various characteristics of the players’ main character. Players can only take five Heroes in battle at a time, creating their Battle Team, with their other five sat in waiting should they wish to switch them around. Heroes can be upgraded using Soul Crystals earned from gaining ranks in the PVP Arena and in the Arena Treasure Boxes, these upgrades will boost a Heroes attributes; they can be upgraded a number of times based on their individual quality, from a standard Initial Hero having no upgrades up to a Red Hero having 12 chances to upgrade.

Much of the game’s content is automated, using an auto-pathing system players will click hyperlinks in quest windows to automatically make their way over to the required NPC or area that a quest requires (though players do have the choice of manually moving around themselves). Similarly combat revolves around players using tactics to build the best Battle Team they can, once they begin the battle they will automatically engage in turn based combat with the enemy until they are victorious or defeated.

Primarily players will focus on PVP for the endgame content where they fight in duels in the Arena that continues every day in four hour bouts and the top 100 players gain silver rewards and the top three ranked players can gain extra silver as well as Arena Treasure Boxes. For endgame PvE players can enjoy tackling the World Boss, a powerful mob with huge amounts of hit points and powerful attacks, players earn silver based upon how much damage they deal to the it.