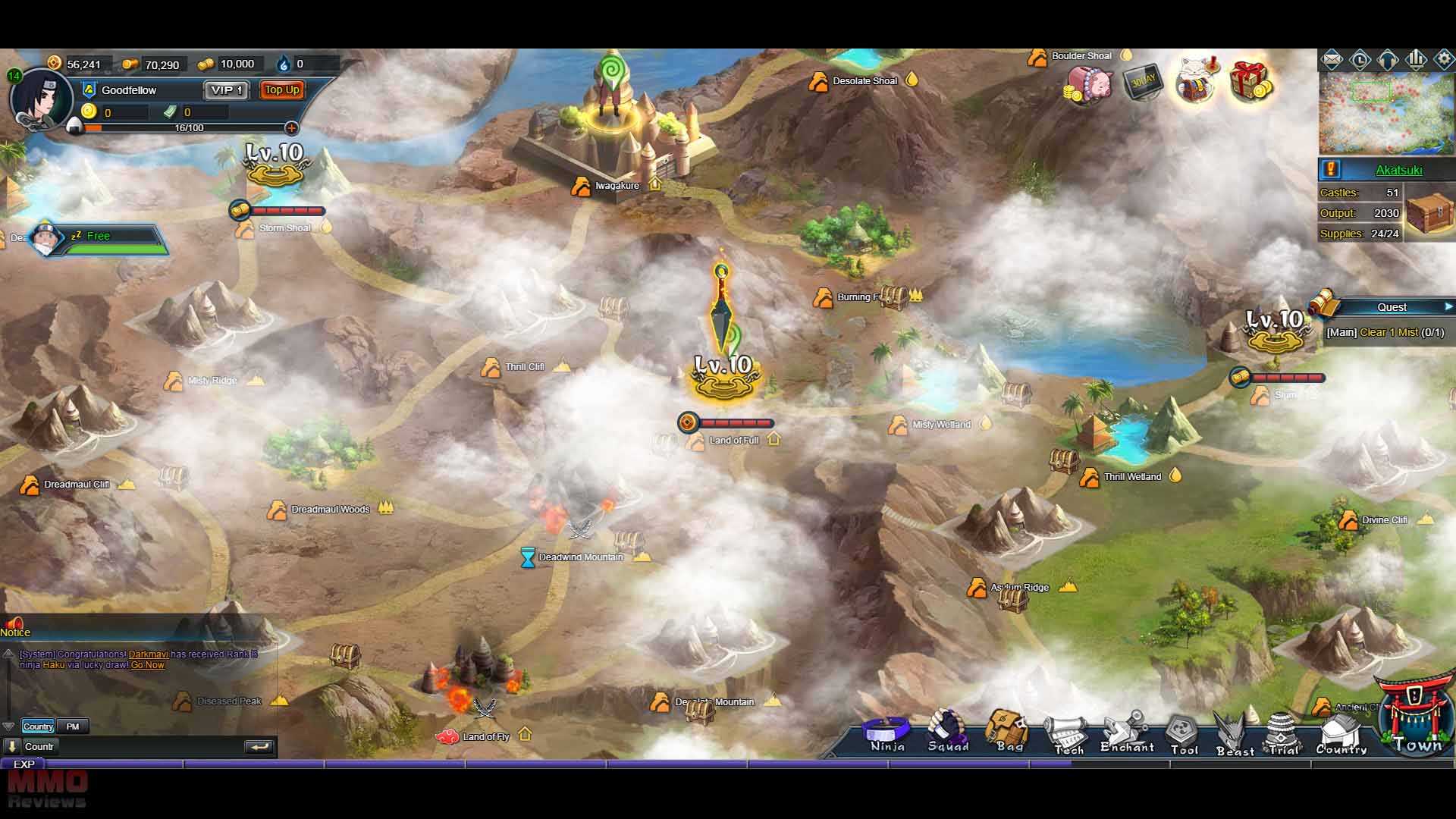 A free to play Naruto themed browser title that focuses on players putting together their own team of trained ninja made up of the various popular characters from the hit anime and going up against some of the equally popular villains. Take control of your own village to earn resources, assemble a ninja squad and train up your characters, and engage in PVP and PVE content.

The game’s focus is to earn ninja from the famous faces of the Naruto series, train them up to make them powerful, then tackle increasingly more difficult PVE content or try to best other players in PVP events. Class of Ninja follows a cycle of gameplay where players constantly improve their characters to take on greater challenges, which in turn grant them rewards to allow them to improve their characters and take on even greater challenges. The strength of a squad on ninja is represented by its Battle Rating, which is made up by the sum of the ninja that are part of it, their level, abilities and quality (using a traditional grading system D to S quality).

When entering combat, whether PVP or PVE, players lose control of their ninja and the combat plays itself out based on the characters personal stats and upgraded skills and abilities; both teams will continuously attack one another based on each personal ninja’s triggers and target preferences (e.g. attacking the front line or back line of a squad formation) until all the units from one team have been defeated. Through a battle each ninja builds up their own Ultimate ability, in full Auto mode the AI will use these powerful abilities when they are ready, however, players can turn full Auto off and choose when to use these skills themselves giving them a slight element of control to their ninja’s attacks.

One of core PVE elements to the game is the Campaign, dozens of stages that must be completed in order and grow more difficult with each stage. These stages are lightly quest/story based and will be how many core ninja characters are collect to join a players squad. When completing a stage players will earn various rewards, including specific items that drop from that Stage, these items can be equipped to a player’s ninja character in their equipment slots with only certain items being equipable for certain ninja. Once a ninja has their six chosen items equipped then the player can choose to “Evolve” the character, which makes them more powerful, and absorbs all the equipped gear, emptying the slots, and refreshing the slots with six new items to collect. This method requires players to return to previously completed quests to grind the same needed items, as well as coming certain items to create a brand new one that might be required for a ninja’s slot.

Each player has a Village that they control and is the main source of food, wood and copper resources needed to upgrade both the village itself and the player’s assembled ninja. Food is used to increase a character’s level, which can never go higher than the player’s account level; similarly Copper is used to upgrade a character’s unlocked skills, which cannot go higher than the ninja’s level. These different upgrades to a character make them stronger and able to take on higher challenges and further advance the PVE campaign, or ultimately take on other players in PVP.

With the Territory War players battle against each other to try and control various NPC territories or plunder the territories of other players, all of which provide resources to help improve their ninja squad. Once territories are occupied players must despatch their different ninja to defend these area, as different territory produce different resources some become particular important and valuable to control; territories can be upgraded to increase the yield gained from them.