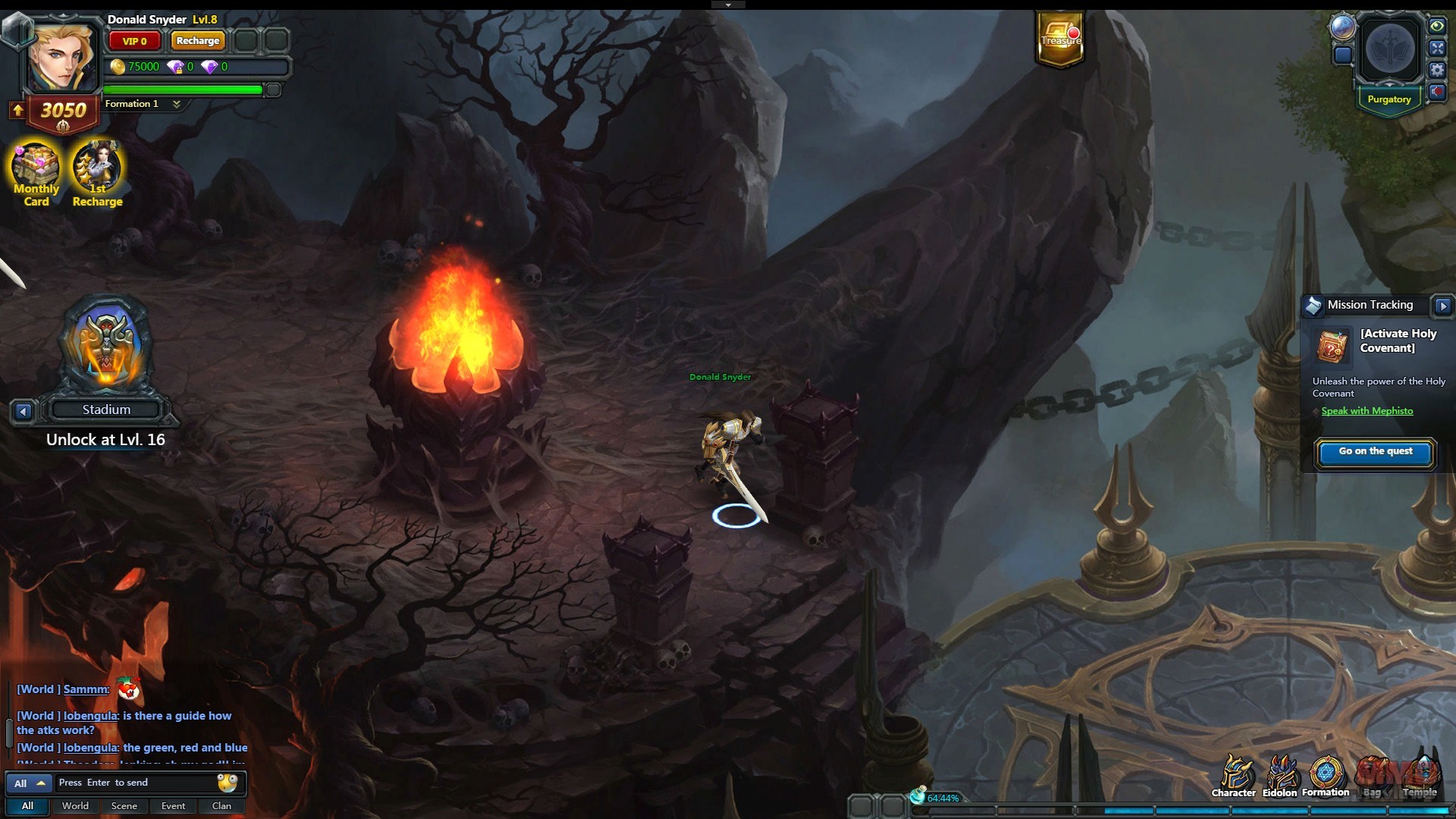 You, an Avenger of the afterlife, have been summoned to recover the most powerful of ancient relics, the Holy Grail, an objective of such power that evil stirs at the rumours of its reappearance and now you and the heroes and devils of old, the Eidolon, must recover it at all costs. A free to play RPG with Hero building mechanics, Chronicles of Eidola provides a story focused PVE-PVP title that can be accessed through web browsers without the need of a client download.

The core of the game revolves around a traditional hero building MMO, players will advance the story driven quest content, level up their primary character, and unlock new features that grant access to various characters that they must recruit and level up. With PVE and PVP features that advance as the players play the game, players must master the unique combat system and their own team strategy to defeat some of the game’s most difficult challenges.

The Eidolon come in various shapes and sizes, with unique damage dealing, buffing, hindering and healing abilities, and the game provides a long list of recruitable characters that give players a wealth of options when it comes to defining their playstyle and strategy. By spending currency and materials earned through gameplay players will improve their Eidolon, increasing their star rank (ranges from 1 being the worst and 5 being the best) which increases their stats and unlocks new abilities.

Each ability an Eidolon has perform a specific function on a set area, such as the back row of the enemy formation, or the first enemy directly in front of them in a row, or even the opponent that currently has the lowest amount of hitpoints. Similarly a beneficial ability could heal all allies on the same row, or shield allies in the same column, due to this players must think tactically of where to place their Eidolon in the 3x3 battlegrid formation in relation to how they interact with each other and how they interact with the enemy. As a player increases their character level they will unlock new formation patterns as well as increasing the number of Eidolon who can be placed in a formation (with a maximum of 5).

The combat system works off the premise of building up combos using the Arcane symbols popup, at the beginning of each round the player can choose one of three different symbols: Glacial (blue), Vital (green) or Infernal (orange). These three colours correspond to different abilities of the Eidolon and must be used to trigger these abilities, an ability may require the player to use an Orange symbol then a Green symbol, which can either be done in consecutive rounds (Orange in one round, then Green in the next), or subsequent rounds such Orange in one round, blue in the next, orange in the next and then Green, at which point the ability will be cast (the symbols must still be selected in the right order and a player could not activate the Green if the Orange has not been activated first).

With different Eidolon having different abilities this determines the order in which players may wish to combo their Arcane symbols, either to have abilities trigger one turn after the other to synergise, or all abilities occurring at the same time, providing more strategy to combat.

With various features unlocked as players climb in level they will get the chance to play in PVP Arena to battle against other players and earn Medals that can be spent within the shop to purchase new items. Players can also engage in co-op based PVE instances with other players, fighting against numerous enemy formations and the team leader choosing which of their party should face which threats!