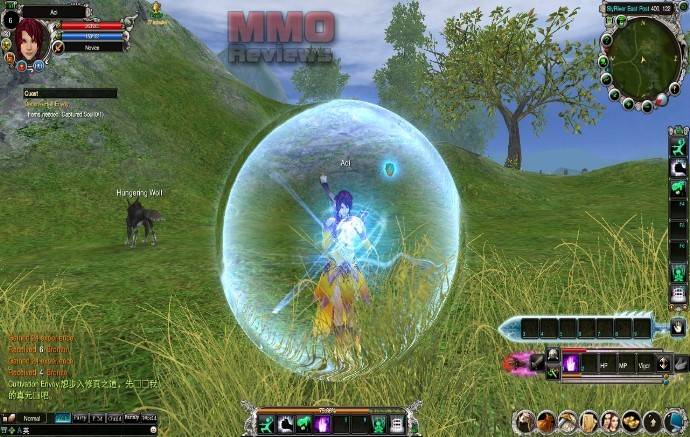 Celestial Destroyer is a free MMORPG with Chinese elements, as it's based on the Chinese internet novel ZhuXian.

In the beginning, the world of man was beset by tempestuous storms. The thunderous roar of lightning wracked the land and disasters befell mankind. Man lamented his inability to escape death and calamities and throughout the land was heard the wail of despair.

In desperation, man imagined that there were nine heaves above, where mighty gods dwell and nine netherworlds below where souls went to rest in the infernal halls. Thus did man begin to hope for immortality and devoted their worship to the great gods they had brought forth.

Despite the knowledge that death was unavoidable, all that lives, loves life and fears death. Belief in the infernal lands haunted man, and so, man yearned ever more for immortality.

Thus did wise men and sages begin to search for the secrets of immortality. Though immortality was still unattainable, there were some who were well cultivated in the mystical arts that understood the secrets of Heaven and Earth, and even as mortals they had great powers, with various magical weapons they could shake the Heavens and make the earth tremble.

Player under level 30 is not eligible to PK. There are 3 different colors of name categorized under PK: “white”, “orange”, and “red”. Player's name will appear in red when the PK value is positive. The name becomes redder if the value getting higher. The player's name is white when the PK value equals to 0 and does not launch attack to other white or orange players. Orange name means a white name player launch the first attack toward white or orange player, and the name will remain in orange in a certain period. A White name player will not receive any PK value for killing an orange name player. The drop rate of an orange name player is the same with a white name player.

The Librums are used to strengthen your skills, most of these skills are passive skills.

In the world of Celestial Destroyer, every player can learn the skills recorded in the librum of his clan, increase the powers the existing skills. The skills can even effect your development in your clan.

Exalted Aspiration is an ancient book that records strange phenomena of heaven and earth, about rare beasts, the demons and monsters, and the legends of heroes from each era. Players can get their name recorded Exalted Aspiration through their contributions in the game, so that their names may endure for all eternity. For the top rank players, they will be able to obtain the precious items, and to prove their strength and ability.