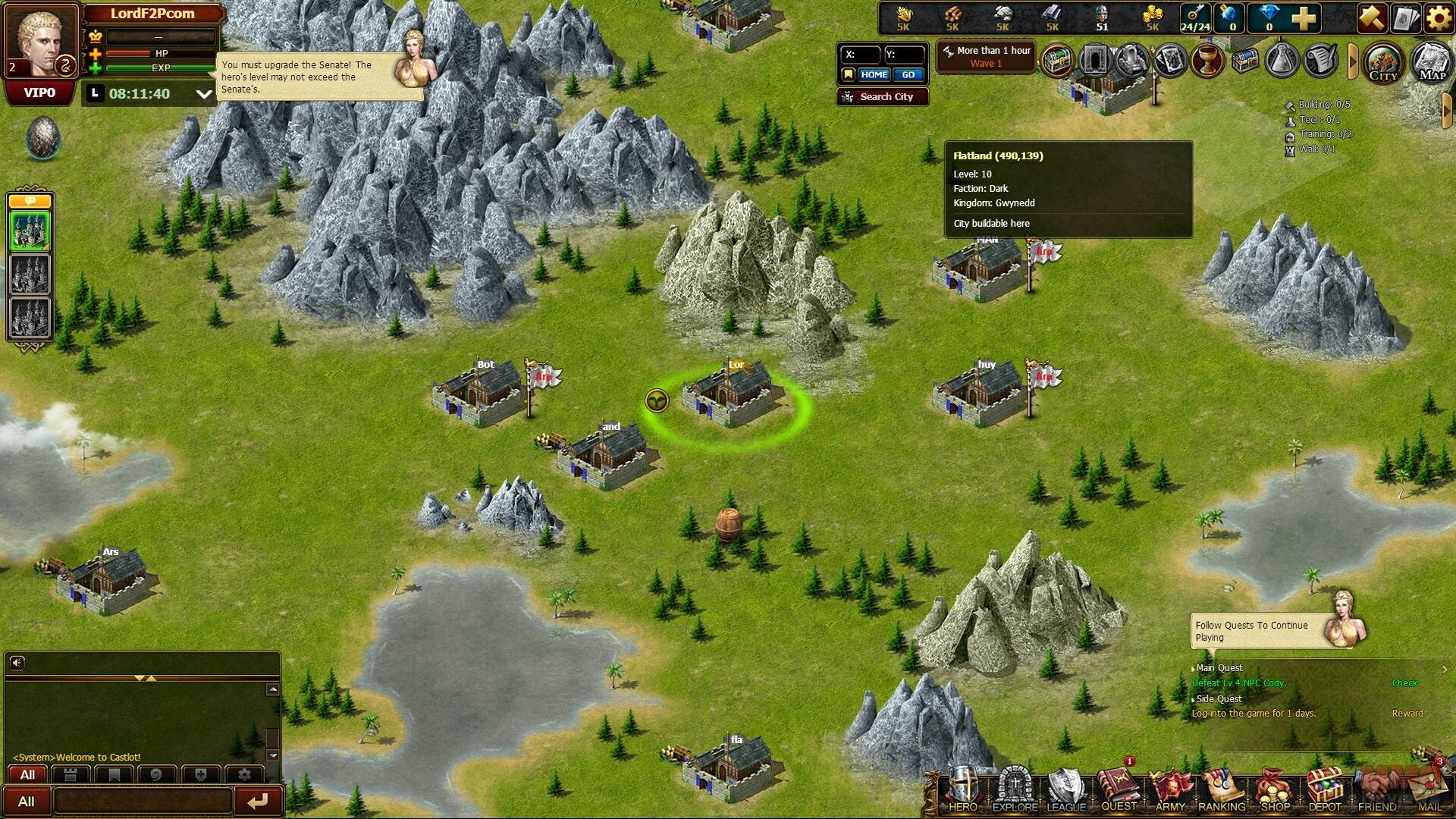 Castlot is a free-to-play browser-based MMORTS that features turn-based real-time combat, competitive gameplay, and resource management. Players will develop their own city, recruit epic heroes to fight under their command, participate in epic PvP battles and take action against other players and their resources through setting traps, stealing resources and spying.

The game is set in the background of Britain's defence against Saxon invaders in the early 6th century. The land at that time is mainly separated into two factions, the Dark and the Bright, led by Lord Blackmore and King Arthur respectively.

There are three factions within Castlot: Players may choose between the Dark, led by Lord Blackmore and the Bright, led by Arthur, while the third one is a non-playable faction representing the Saxons.

Players take the role of the main character in the story which is specific to the faction they have chosen. They live the events of their choice of faction. The choice of faction also determines which heroes and which types of soldiers they will be able to recruit.

Buildings are an essential part of the gameplay, each having its own function which allows players to progress in the game. Building types are categorised as infrastructural, economic, and military.

Having received their annexed lands, players are able to build grain fields, sawmills, quarries and mines to produce crops, timber, stone and iron. Increasing the level and number of the resource fields will increase their hourly yields of the resources. The Castellan's intellect and bonuses from scrolls or props also affect the production of resources.

Other ways to get resources include robbing or ransacking other players' cities, completing quests or trading in the market.

The Bright and Dark faction each have a set of ten specific epic heroes players are able to unlock. While the Dark faction unites well-known heroes such as Mordred, Ector, Vivienne, Morgan Le Fay, etc., the Bright faction offers famous heroes such as King Arthur, Merlin, Lancelot, Percivale, etc.

Those heroes are used in PvP battles, exploring, and the arena Raceup. They are characterised by four attributes: stamina, strength, intellect, agility. In order to upgrade their heroes, players can send them to get Avalon training where they will get lots of EXP. By allocating attribute points, players are able to increase their heroes’ basic attributes to make them more powerful and customise them to their needs.

Castlot features a unique goblin system that allows players to place goblins in another player’s annexed lands where they will steal half of the resources yields if they are not driven out or captured within eight hours. To protect their own resources, players have to set up cases on their annexed lands to capture enemy goblins.

There are two types of goblins; while normal ones have a 50% success rate in stealing, sly goblins are 100% successful.

Diamonds are the game’s premium currency that can be attained through purchasing. They have almost the same effects as magic potions, but unlike the later they will not expire. When purchasing Diamonds to a certain amount, players are able to become VIP members and enjoy different VIP privileges.

Diamonds can be used to buy absolutely anything in the shop, to reduce cooldowns to zero, as well as in hero training, in renaming, etc.