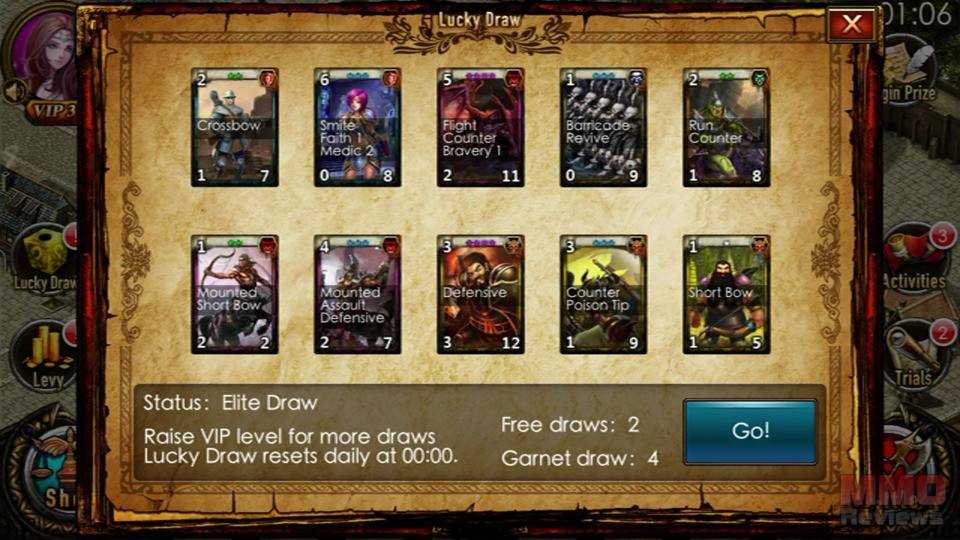 Cast & Conquer allows players to step into the shoes as a commander of their own army in this strategic turn-based Card Collecting Game that is completely free to play on both iOS and Android platforms with the option of cross-platform capability. Players will focus on collecting numerous cards through different features of gameplay and face off against challenging the enemy AI in story driven campaigns or facing other players in one-on-one duels to claim the title of Champion.

Cast & Conquer is a typical CCG with a variety of MMO based features such as in game chat, questing, acquisition of gear and the ability to level up your character. Primarily players will focus on unlocking new cards to build up their army, ranging from various unit cards to particular spells and abilities that will offer different functions in combat. Players will also be able to unlock the key buildings in their own city that will give them access to different features and open up more gameplay options.

Players have the option of working through the single player campaign that will shed light on the story and overall plot of the game as players work through fighting increasingly difficult challenges and in turn reaping great rewards. Realistically the campaign mode is a gateway into players growing comfortable with the game, being able to earn their initial cards and other rewards and setting them up to play competitively against other real-world players.

The battlefield consists of one or more lines, divided up into various slots, each of which can be filled by a single unit (either your own or the enemy). At each end of the battlefield the player has their own general and the objective is to protect them whilst simultaneously trying to kill the enemy AI or player general.

Each turn players are able to place down readied units, those from their deck are randomly selected and come in a variety of types, from melee Soldiers that deal damage to nearby units, Armoured units that are exceptional defensively and able to soak up most physical damage and stop advancing enemy units in their tracks, flying units that can fly over ground units to reach the backline, and more. Once placed on the battlefield a players units will automatically begin moving each turn towards the enemy general, if they are blocked by an enemy unit then they will automatically attack it on each turn until either they have killed it or have been killed.

Whilst players will primarily rely on their units they also have a wide selection of abilities and spells that they can choose to use during their turn that can augment their units and provide them with valuable buffs and boosters to help them in the battle and even heal them if they have taken damage.

With a huge selection of cards available the skill and strategy for a player comes in deciding which cards from their entire collection that they will choose to put in their deck, the individual army of units that is taken into battle. Players must strategise on what combination of units, spells and abilities to make up their deck as the order in which they are drawn in battle is completely random and so players must quickly be able to change up their tactics depending on the available cards.

As players gain levels so too does the size of their Deck increase, starting out small so that players can get used to combat without being overwhelmed by the number of available cards, for every five levels that a player rises their own deck capacity will also allow an extra five cards. They can acquire new cards to fill these decks either through completing PvE content such as the campaign or typically purchasing card packs in the game store using in game premium currency.