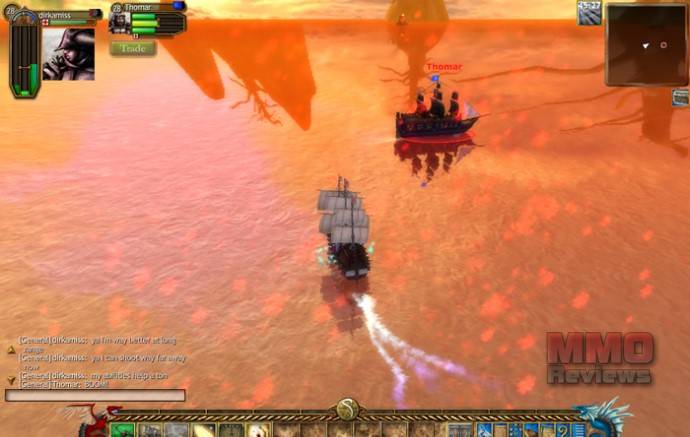 Captains of DarkTide is a fantasy free-to-play naval strategy MMORPG, where players build and explore a fantasy world as the captain of a mighty ship. Fight legendary creatures, other vessels, other players, or join with your friends and fight epic bosses to win treasure and glory.

A beautiful large 3D world. Seamless zone transitions with an unique feel for each faction. Zones set up to allow for easy progression while leveling. Each zone contains shops with unique items and it features a portal system to allow quick travels between towns.

Engage the enemy with cannons and special abilities. Fight dragons and other mythical creatures. Use your abilities from your captain's skill tree or find special troops such as dragon-summoning wizards.

Defender
Specializing in defense. Strong at short range but limited in long range and cannon abilities.

Commander
Command tree that increases the performance of all friendly ships.

- Best looking 3D browser-based game currently available
- Huge seamless world where tens of thousands of captains can adventure together
- Over 300 troop types that may be used to crew your ship, everything from dragon-summoning wizards to orc snipers
- A crafting system that may be used to build cannons or the top level ships
- 3 talent trees (Defender, Commander, Destroyer)
- Hundreds of ships with unique ship types for each captain tree, each with its own unique strengths
- Cooperative questing in groups
- Epic boss level encounters
- Player trading