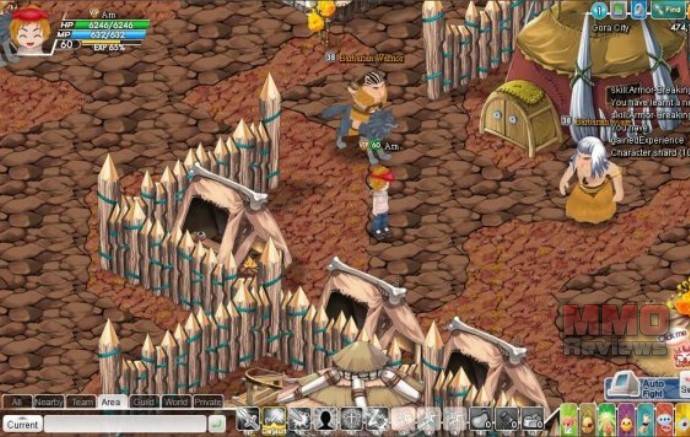 Canaan is an online world, free to play browser-based mmo, where you can adventure with your friends.  Want to explore a dungeon, capture powerful pets and train them up, craft items for yourself or to sell or join a guild and make new friends? You can do any of these things in Canaan.

After the King of Canaan died a tragic death, the four heroes returned to the capital, Karugarner City, to try to regain control of the city and the people. They abandoned their quest temporarily to help the people, but were ambushed at the Tri-Fork. A huge battle broke out, and Kalika disappeared. Evian is now believed to be dead, and only Heineger and Walhallen survived. They escaped and returned to Karugarner, only to be exiled by the church who believed they had sought to seize power.

Warrior
Warriors are close combat fighters who like to be in the thick of battle.Encased in heavy armour they are protected from the strongest physical blows. They are good at dealing damage while protecting their team and have a strong resistance to physical damage but low defence against magic power. They should not be underestimated, as they are resilient and nearly always found on the front-line.

Mage
Mages are highly intelligent with a natural affinity for controlling the elements. A crackling ice storm or a raging wall of fire on the battlefield is a sure sign a Mage is nearby. They have low health and physical defence but make up for it with their ability to inflict huge damage. Because of their fragile nature, it’s important that the party protects them.

Ranger
Trained to be lethally accurate with a bow, Rangers like to pick off their targets from a distance while the enemy is distracted. They have the highest dexterity which increases their damage as well as avoidance. They are agile and deadly, attacking with fearsome speed and accuracy. They have medium defence and high damage.

Priest
Priests are blessed with the ability to control light and darkness. While they are widely known for their powerful heals and buffs, they also have command of dark magic which can make them fierce adversaries. They are good fighting alone or supporting a team with their buffs and heals. In this way, they are a valued member of any party, taking time to selflessly protect and support their friends while doing damage to their foes.

Many creatures in the Canaan world can be captured and trained as pets, from the hard shelled Turtle, to the ferocious three headed Cerberus. Pets can be traded with other players and each pet even of the same type can have its own unique set of skills and attributes. You can have 3 active pets as well as a number of inactive pets with you or in your pet storage. There are 4 different pet modes: Attack, Defence, Possession and Rest. You can assign one pet each to Attack, Defence, Possession and the remainder will be in Rest mode.

Some adventurers like to tame pets which will fight by their side in battle while others prefer to have their pets heal them or bombard their enemies with powerful spells.
With the battle position option you can chose to have your pet fight in front or behind you. With your pet in front, enemies will have to target your pet with close range attacks but can still hit you with ranged attacks. If you chose to place your pet behind then you will be able to protect it from melee attacks.