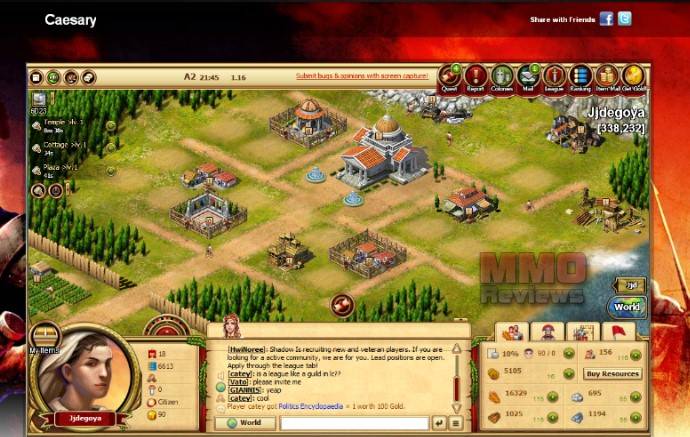 Developed by ShenZhen for internet browsers.

Caesary is a browser-based mmo game created on the genre of sim-city building Real-Time Strategy (RTS) battle. The economy is Sesterces (taxed) driven; but Kreds-Gold is available for power players to advance level with a quicker pace. Regular players are expected to play it as an idle game. The theme is based on the Ancient Roman Empire (Republic period).

Start as a Consul of the Roman Empire and rewrite history, bringing order back to Rome. Expand your city, recruit heroes, train devastating armies, conquer land and forge your empire. Battle other players and monsters with immersive real-time strategic combat as you rampage your way across a massive world map.

Battle Replay
You can simulate the grandeur of past combat in graphical animation and the "detailed statistics" of the fight in text log. It "pleasures" your eyes as well as "educates" your mind.

Dogfight
Traditional strategic battles involve just you and your opponents. Now, Caesary allows you to join other players’ battle in the middle or have someone else’s join your own battle. Any time! (In theory, the entire server’s players can jump in one battle in progress!) And also the War Simulation Colosseum allows you explosive battles between players for massive prizes!

Six types of Hero with 255 levels
Heroes with 6 types of Potential appear randomly for you to recruit and capture. Your heroes will serve you well if you treat them right. Broaden their Experience (EXP) and develop their Traits on your path to victory!

Personalized Identity
Player (lord) avatar is "freely" changeable with dozens of images to choose from. League Emblem (league’s symbol) is customizable to a degree that it’s "unlikely" you’d see another league using the same set of design as yours.

"Historical Context"
Caesary is "committed" to recreate the Roman Empire with reference to buildings, quests, items, and the use of tactics! Players get total "immersion" into the era of Roman glory.

"Unprecedented"
Colonization System. Caesary brings forth the "original" concept of Sovereign-Tributary relationship! As sovereign city lord, one can own as many Tributary cities as their power and diplomatic charm can allow. You are able to take 20% tax rate from each one of your Tributary cities. But watch out! Before you get too comfortable, make sure your dominance won’t be compromised by any potential mutiny (War of Independence)!